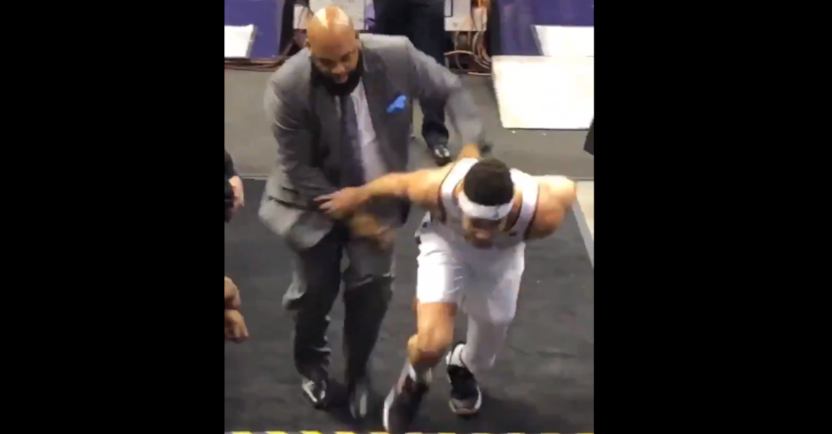 Fights on NBA courts happen sometimes, such as Charles Barkley and Shaquille O’Neal in 1999, Draymond Green and Bradley Beal in 2017, or Isaiah Thomas and Rajon Rondo last year. But it’s the fights or attempted fights off the court that often get more legendary, from Matt Barnes and Derek Fisher in 2015 to teammates Bobby Portis and Nikola Mirotic in 2017 to the “po-lice presence” called after the Clippers-Rockets secret entry fight last year. And we almost got one of those Tuesday, with the Phoenix Suns’ Devin Booker and the Minnesota Timberwolves’ Gorgui Dieng both getting ejected after a couple of on-court tussles, including an elbow from Dieng and a shove or a punch from Booker. Dieng then told Booker to meet him in the tunnel, and both tried to make that happen:

Devin Booker and Gorgui Dieng are both ejected after a fight and then rush into the tunnel 👀 pic.twitter.com/jR8LuhlneU

Here’s another angle of Booker trying to make his way to the tunnel, with a Suns’ staffer trying to hang onto him:

After the game, Dieng had a great comment on this:

Gorgui Dieng said he wasn’t trying to fight Devin Booker after their ejections. Dieng said he just wanted “to exchange jerseys with him.”

Yeah, that’s believable, all right. “Exchange jerseys with him” may be the new “Meet me in Temecula.”