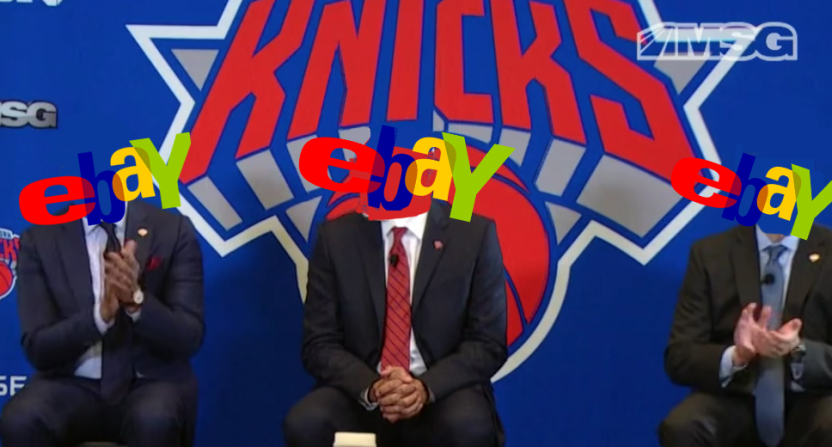 One of the great mysteries of the modern sports world is why the New York Knicks are such a bad team. You would think that the NBA would have a vested interest in making their flagship Big Apple franchise into a perennial powerhouse. You’d think that whoever owns the team would want to make bags of money by building the best team possible and giving fans a good product. You would think that, eventually, things would turn around for the better for a team that plays in Madison Square Garden.

There was a time when the Knicks were a good franchise. We used to live in a world where they were an annual playoff squad, even reaching the NBA Finals a few times. However, those days are long gone. They’ve only made the playoffs four times since 2001. They’ve made it out of the first round only once in that time. And they’ve missed the playoffs in each of the last five seasons. The future doesn’t exactly look too bright either, as inept owner James Dolan seems more concerned with his shitty blues band than with getting the franchise back on track.

So can you really blame one Knicks fan for throwing their hands in the air and deciding to auction off their fandom via eBay? Citing 33 years of a love-hate-love-hate relationship with the team, eBay user evanperl is giving up on his longtime team and offering up his rooting services to whoever wins the bidding.

I hate the Knicks.  I love the Knicks, but I hate the Knicks.  Die-hard New York Knicks fan.  My childhood room is still filled with posters from the 90’s, the good ole glory days.  And not just Ewing, LJ, Houston, I’m talking Rick Brunson NYK articles cut-out, laminated, and still in what is now basically a museum.  Pictures of me at 13-years old with blue & orange colored braces, that’s a tough yearbook photo, and in a Knicks collared shirt to match nonetheless! After all the ups, downs, more downs, more downs, infinite downs, I have reached my absolute breaking point.  As of this moment, my New York Knicks fan-hood is officially for sale.  What is included in bidding on my new fan-hood? I will honor the team of your choosing and be a fan. What does that entail?

You get a lot for your bid, including promises to bet $500 on the team’s total over wins no matter what, an NBA Package purchase to watch all the new team’s games, two different jersey purchases, two different game attendances, and a team license plate purchase. The fan also promises to throw out their Knicks trash can (and replace it with the new team) as well as burn at least three pieces of Knicks memorabilia.

Clearly, this fan is willing to put their money where their mouth is.

Bidding started at $1,973 (to mark the last time the Knicks won a title) but as of the time of this writing, it’s already over $2,000 with four bids placed. So if you’re looking to get a newbie on your NBA team’s bandwagon and have some money to spare, get in now because bidding is over in just a few days. However, if I were the winning bidder, I’d make sure there was a no-backsies clause just in case the rumors are true and Dolan does end up selling the Knicks.