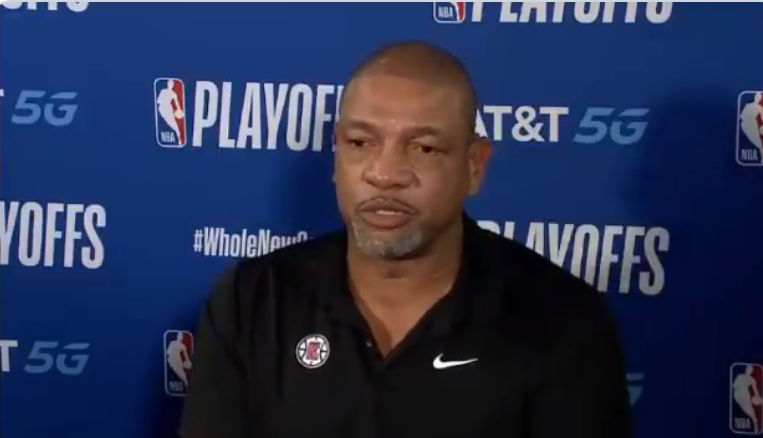 Following the Los Angeles Clippers’ second-round loss in seven games to the Denver Nuggets, the franchise is making a change at head coach. As ESPN’s Adrian Wojnarowski reported, the team is moving on from Doc Rivers, who had two years left on his contract. Wojnarowski also added some candidates they might look at:

Doc Rivers had two years left on his contract, sources tell ESPN. This is a challenging coaching search for Clippers, who are the ultimate win-now team. Among top candidates in the marketplace: Clippers assistant Ty Lue and former Rockets and Knicks coach Jeff Van Gundy. https://t.co/Ov02RYNbK9

For his part, Rivers put out this statement:

And the Clippers added this statement:

“Doc has been a terrific coach for the Clippers, an incredible ambassador, and a pillar of strength during tumultuous times,” Clippers owner Steve Ballmer said in a statement Monday. “He won a heck of a lot of games and laid a foundation for this franchise.”

Rivers had been coaching the Clippers since 2013, joining them following an unusual coach-for-assets trade; the Clippers sent a first-round pick to the Boston Celtics that summer in exchange for the rights to hire Rivers (who was still under contract with the Celtics). In seven seasons as the Clippers’ head coach, Rivers went 356-208 in the regular season, a higher winning percentage (.631) than he had posted in previous stops in Boston (.577) and Orlando (.504).

But Rivers didn’t find as much playoff success in Los Angeles. He went 59-47 (.577) in the postseason with the Celtics, including a NBA championship (2007-08) and an Eastern Conference championship (2009-10), but finished 27-32 (.458) in playoff games with the Clippers, and never advanced to the conference finals with them. His teams saw three conference semifinal exits and three first-round exits, and they missed the playoffs entirely in 2017-18. And this season’s exit was perhaps particularly surprising, given the talent they had following the offseason acquisitions of Kawhi Leonard and Paul George.

Whether moving on from Rivers will be the right call for the Clippers remains to be seen. The move’s a little unexpected; while the Clippers’ lost 3-1 series lead against the Nuggets drew plenty of criticism, including for coaching moves, analysts including John Hollinger and Jovan Buha (both of The Athletic) also cited numerous other issues with the team, and they both (like many) figured Rivers would be retained. And Hollinger’s point on the “blown 3-1 leads” (many have noted that Rivers is the only NBA coach to ever be up 3-1 three times, or even two times, in a best-of-seven series and go on to lose) deserves repeating:

Everyone is piling on Doc Rivers today, but his history says he’s one of the best coaches in the league. Yes, he’s blown multiple 3-1 leads as a coach. Just keep in mind that you can’t blow a 3-1 lead unless you’re up 3-1.

And that should be kept in mind in evaluations of both Rivers and this team. Yes, the Clippers’ eventual loss was crushing, but a seven-game loss still shows them accomplishing more in the first place than a loss in fewer games would have. The playoffs in general are a small sample size, especially for one postseason and even more so for one series, and strange things can happen there. And that’s perhaps even more true in 2020, where the postseason involves bubble life, no fans, and no home-court advantage.

But at the same time, there were clear issues with this Clippers team and their play in this series, and maybe a new head coach or a new system helps to fix those. It wouldn’t be the first time where one coach laid a strong foundation but couldn’t quite get over the hump, and where a new one built upon his predecessor and led them further. But there’s also a good chance that the team stays the same or even goes backwards with a new coach. At any rate, it will definitely be interesting to see who the Clippers turn to next. And it will also be interesting to see what’s ahead for Rivers, whether that’s in coaching or in broadcasting.