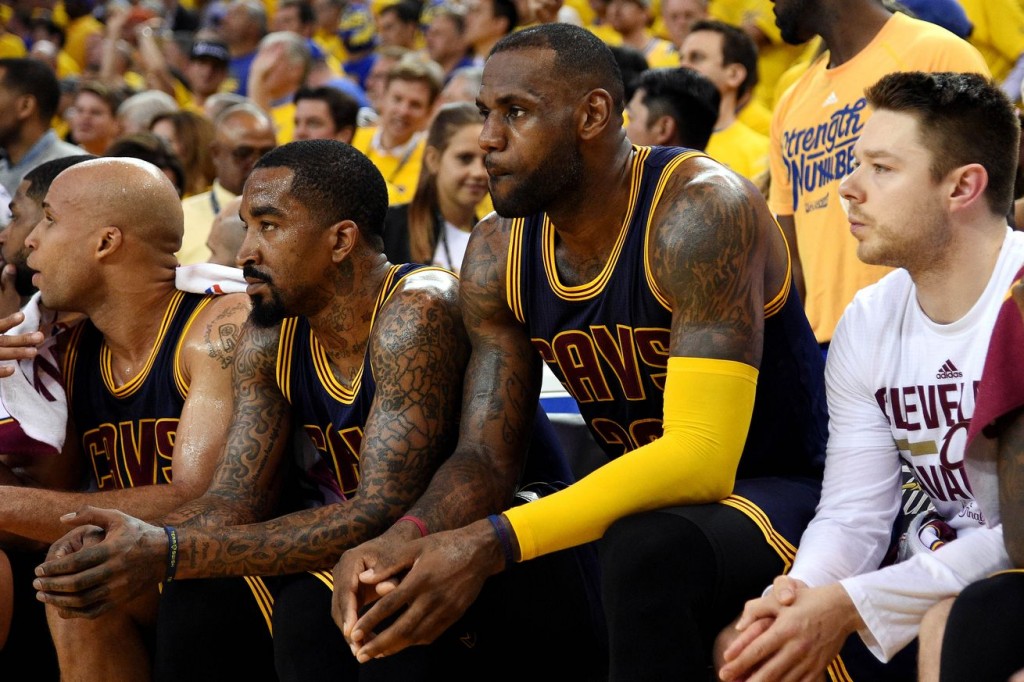 Cleveland, this isn’t about you. You’re in the wrong place at the wrong time.

To be a Cleveland sports fan is to know the depths of great disappointment, and many Cavaliers fans are disappointed after Sunday’s Game 2 of the NBA Finals. This is simultaneously the only honest reaction to the start of the series, and a reaction which doesn’t square with the reality of the situation facing the Cavs.

Let’s explain, starting with a note of empathy. Fans of the Golden State Warriors can relate to what Cavs fans are going through (but not the larger experience of being a Cleveland fan across multiple sports).

After Game 4 of the Western Conference Finals against the Oklahoma City Thunder, Warriors fans could not believe what they were seeing. They were gut-punched at the sight of their team – the calm, unruffled, joyful Warriors that won 73 games – being turned into a bunch of antsy, rattled and frustrated teammates who stood powerless in the face of the Thunder’s relentless and physical defense. It was unsettling, but it was temporary, which we might have suspected given the body of work of both teams involved.

Cleveland fans watched their team go 12-2 through the first three rounds of the 2016 NBA Playoffs. The Cavs’ first home game of the playoffs was a five-point win over Detroit. They won every subsequent home playoff game by at least 11 points. Cleveland took a brief vacation during its weekend in Canada, losing Games 3 and 4 of the East Finals in Toronto, but subsequently won Games 5 and 6 by an average of 32 points. The Cavs won Game 6 on the road by 26, forging a dominant run through three rounds of postseason play.

Sunday night in Oracle Arena, this same team – so used to dishing out domination – let go of the rope early in the fourth quarter of a game it sorely needed to win. The Cavs split the first two games in Oakland in last year’s Finals, and still lost in six. They needed a split this year to have a legitimate chance of winning this series.

Cleveland fans’ disappointment is understandable. But sadly, it’s not a temporary development because of the two teams involved in this series.

The Warriors won 16 more games this year than the Cavaliers. That’s like a month’s worth of games, without a loss. They had an even greater win advantage over OKC, which is why their comeback, while still historic, wasn’t all that surprising. Winning three games in a row is hard, unless you started your season by winning 24.

So the idea that the Cavs will suddenly flip the script on the Warriors in the way Golden State did to OKC is preposterous. Yet Cleveland fans shouldn’t be too hard on their team simply because the opponent is the Warriors, two wins away from an exalted place in the history of professional basketball.

On Jan. 18, the Warriors thumped the Cavs by 34 in Ohio. Cleveland’s inadequacies at the defensive end of the floor were unmasked for all the world to see. Kyrie Irving might be a very talented scorer (who, by the way, has been contained by the Warriors’ defense in the first two games), but he gives up a bucket on defense for every above-average shot he makes. Based on everything we’ve seen from the regular season, what suggested that Irving would become a better defender against a Warriors team which forces defenders to make more split-second reads and decisions than he is currently capable of?

Cleveland fans simply have to acknowledge that the odds of a close Finals plummeted when the Warriors escaped Oklahoma City. (OKC might still have dominated the series, to be honest, but the Warriors obviously represent a worse matchup for the Cavs compared to the Thunder.)

These Finals can’t be viewed as a disappointment in Cleveland, because Jan. 18 and a season full of evidence told every rational person that the Cavs had no chance to begin with. Why, then, is there such an emotional (and perhaps cognitive) disconnect between fan reactions and a logical appraisal of this matchup?

Why can’t people simply acknowledge how good the Warriors are, instead of ascribing this 2-0 series to the Cavs’ failures? Why is the first instinct to blast Cleveland and LeBron instead of giving an all-time great team its due?

Let’s realize that before Sunday’s blowout and before the NBA Finals began last Thursday, quite a lot of experts and fans felt Cleveland would extend the series to at least six games. I wrote about this before the series started. Here are the ESPN staff picks for the Finals: 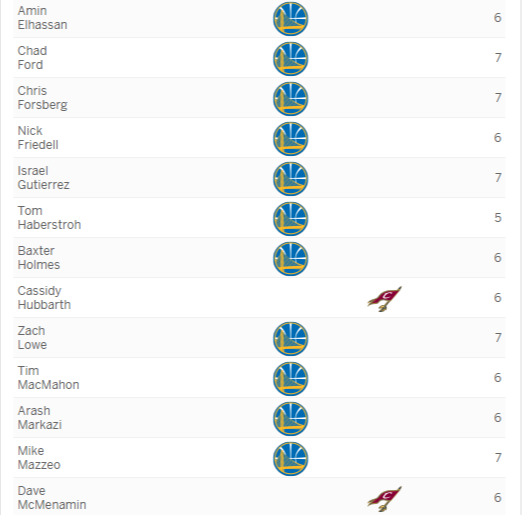 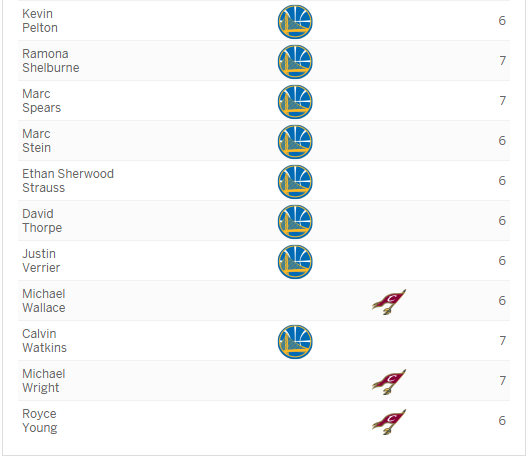 These are presumed experts who make a living covering the NBA, and 28 out of 29 predicted a series of six or seven games. The guys who spend the most time with the Cavaliers, of course, picked them to win, a couple of them in six games. How’s that working out? Even the media members who closely follow the Warriors — Marc Stein, Marc Spears, Amin Elhassan, Ethan Strauss — all picked the Warriors in six.

Were these people watching the NBA all season? For as much attention as the Warriors received, I remain convinced that Eastern time zone residents just didn’t stay up until 1:15 in the morning to watch those late games in Oracle Arena and other Pacific Division outposts. The East-West problem in the NBA is not just a problem related to conferences. It’s a problem related to the ability of those in major media markets – Eastern markets – to follow the powerhouse team which plays on the West Coast.

Eastern time zone writers, pundits and broadcasters saw the Cavaliers play more often this season, strictly as a product of time zones and reasonable-hour game availability. But the more precise and instructive point to make here is that Eastern writers saw the Cavs play more often against Eastern Conference opponents. Measuring the competition can be hard to do when a saturation effect puts teams and conferences in their own silos. If the Cavs and the Warriors were honestly evaluated side-by-side, no one could have rationally predicted a long series between these teams.

On Sunday night’s SportsCenter following Game 2, Michael Wilbon said that as much as Golden State fans might have craved a blowout, they were probably extremely surprised by their team’s ability to pull it off. That’s laughably wrong.

However, Wilbon came back and said something few other national pundits have had the sense or clarity to admit. While on the desk with Stephen A. Smith, Chauncey Billups and Stan Verrett, he asked the group, “Is it possible that the Warriors are simply this good? They won 73 games, came back from 3-1 down against a very good OKC team.”It felt like a revelation when Wilbon broke through the tendency to automatically criticize the loser, and shifted to the other instinct: crediting the winner.

One hopes that such a shift in consciousness will grow before Game 3, and reach a point of national saturation by the time this series is over, which is going to be pretty darn soon from the looks of things.

We’re not at that point yet, however: The East-West problem in the NBA is more entrenched than many of us ever realized, even in this historic season for the Golden State Warriors, now just two wins from its ultimate destination.