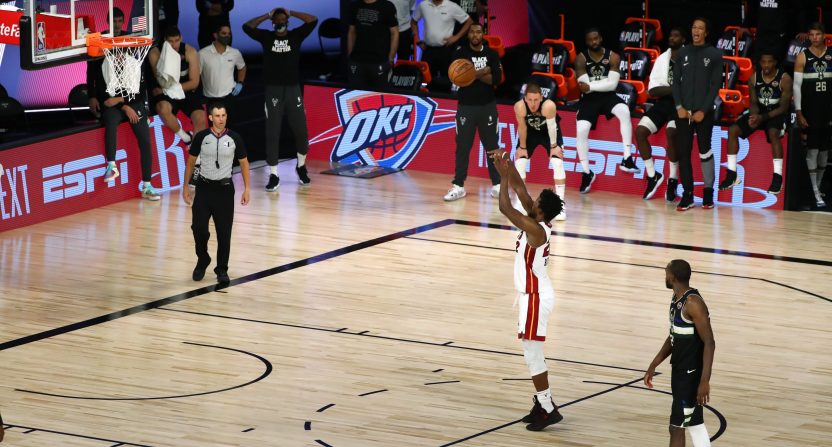 The Milwaukee Bucks were clearly the best team in the East for most of the NBA season, and arguably the best in the entire league. Then, obviously, the season went away for months.

Once play resumed in the bubble, the Bucks were in a tough position. They had the #1 seed clinched at that point, and while getting back to speed was obviously an important factor, it was hard to see how that would outweigh injury risks to players like Giannis or Khris Middleton. Or anyone in the rotation, really. So they coasted, going 3-5 in the seeding games. Then the playoffs began, and Milwaukee lost their opener to the Orlando Magic, who were playing without some of their best players.

That seemed like a wake up call, and the Bucks won the next three games of the series with relative ease. Then they refused to play ahead of game 5 for obviously justifiable reasons, and then eliminated the Magic a few days later after the league restarted.

Then they had to play the Miami Heat, fresh off sweeping the Pacers. The Heat took game 1 behind heroics from Jimmy Butler, and looked likely to take game 2 in much more easy fashion tonight, holding an eight-point lead with less than two minutes remaining. That lead was still six with a minute left, too, and 2-0 looked like a pretty certain outcome. And then, very quickly, it wasn’t.

The Bucks went for a quick two despite the deficit, which almost never works out. This time it basically did, though, when the Heat inbounded to Jimmy Butler against the sideline.

Up four and with two timeouts, that’s an uncharacteristic mistake from Butler, who was probably hoping for a foul call. After another shaky inbounds, Butler missed one of two free throws, and the Bucks ended up with the ball and a chance to tie. That chance went to Khris Middleton, who missed the shot, but was rewarded with a shooting foul on Goran Dragic.

Middleton made all three free throws to tie things up, which meant the Bucks had somehow come back from that deficit without making a three-pointer. That’s almost unheard of, but here we are. Then, Butler went iso for the final look to win in regulation, and was rewarded with what was almost certainly a makeup call, missing the baseline jumper but going to the line after this slight hand contact from Giannis was called a foul.

This was called a foul 😬 pic.twitter.com/PuyomprXip

On the final shot of regulation, in the playoffs, that’s…not what you expect to see called very often. Dragic’s foul was close but much more impactful on Middleton’s shot than that slight handcheck. But it was called, and Butler made the game-winner on the line for the rare walk-off free throw win in the postseason.

Jimmy Butler hits the free throw for the win! pic.twitter.com/7L5cGaUwSi

Short answer: not yet.

Longer answer: no, but it’s not going to be easy at all.

The Bucks were clearly the better team for the “real” season. The question, though, is how much that really matters. It’s already September, 2020; should we really put stock into results from October and November, 2019?

And the Heat are the exact kind of team that would benefit from the layoff. Young players like Duncan Robinson and Tyler Herro were afforded more time to develop, while a vet like Dragic could come into the bubble clearly rejuvenated from the time off. Erik Spoelstra is a fantastic playoff coach, and has shown much more willingness to make adjustments than Bucks coach Mike Budenholzer, which is in some ways a big part of why Milwaukee is down 2-0. (It’s also a coaching disparity that led Indiana to fire Nate McMillan after round 1.) Miami also hasn’t had to deal with the same level of off-court turmoil that Milwaukee has gone through.

So, what’s the case for Milwaukee coming back? Well, it’s both obvious and maybe a bit shaky, but: they have Giannis. The NBA is a star league, when you have the best player on the floor (Jimmy Butler is really, really good, but he’s not Giannis) you always have a chance. A good game from Giannis, Khris Middleton returning to something like his normal self, and some threes falling, and they should still be favored to win any game with Miami. They almost won tonight, after all.

The problem is that if that doesn’t happen in Game 3, they’re in real trouble, and we could be looking at our first huge upset series win of the Bubble Playoffs.