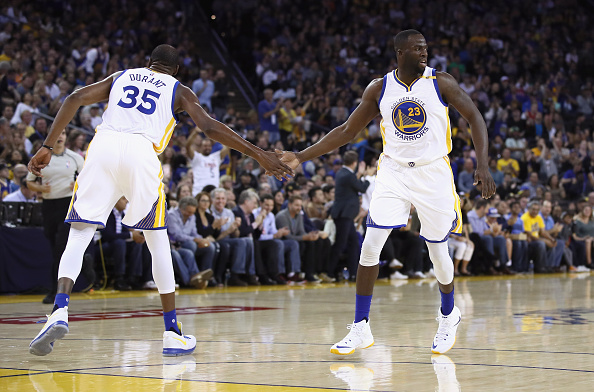 Draymond Green has made a lot of headlines lately for mostly the wrong reasons. Now, he’s back on the front page with some interesting comments about other NBA players.

Earlier this week, Russell Westbrook reflected on Kevin Durant’s departure and some of the comments Durant’s made since joining the Golden State Warriors.

Now, it was time for Durant’s new teammate Draymond Green to respond, and boy did he ever.

Draymond Green goes off on Paul Pierce and those still harping on Kevin Durant's decision pic.twitter.com/Fen6DOm8Uv

Green didn’t just go off on Westbrook without directly mentioning his name, but he also went off on Paul Pierce!

“I just wonder at what point do they get board talking about the same thing. You got all these guys talking. Like (Paul) Pierce today, like, dude nobody care what you did or who you did it for. Just give it a break,” Green said referring to Pierce.

Green referred to Westbrook’s comments throughout the entire quote. Some of the more interesting comments that were directly pointed at Westbrook dealt with nearby Silicon Valley.

“Nobody complain when somebody leave Apple and go to Google. Aren’t they in competition with each other. Nobody talk junk about the CEO who leaves Apple and goes to Google. As a basketball player, you are the CEO of a business. You are a business. Kevin Durant is a big business.”

While the analogy is odd simply because more people could probably name Kevin Durant than Apple or Google’s CEO, it does make sense.

Durant is the CEO of his own legacy and needs to do what he feels is best for him to be happy and be proud of what he accomplished.

Overall, Green’s comments were interesting, but it was the first time he’s said something that raises eyebrows and it probably won’t be the last either.