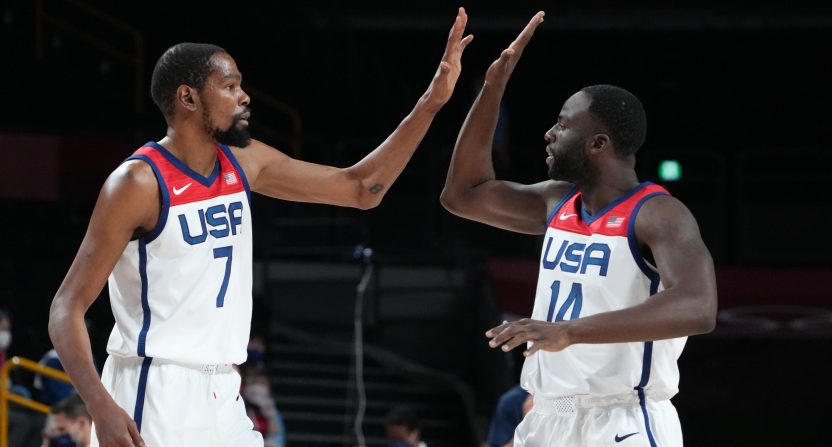 While Kevin Durant is undoubtedly one of the best basketball players in the world today, let alone in the NBA, the stigma that he can’t win a championship without chasing a “superteam” is one that follows him. Right or wrong, that’s the criticism that’s up as Durant has requested a trade away from the Brooklyn Nets after the “Big 3” set-up of the last two years failed to produce much of anything.

However, Durant’s former teammate Draymond Green doesn’t understand the criticism that Durant is facing, and he explained why on the latest episode of his podcast (via Audacy).

“If Kevin Durant says I actually don’t want to be here anymore, I want to go somewhere else – why does it matter? Why does that make you weak, why does that mean he’s running from something, I don’t understand that,” Green said. “Players are in control of their situation, players are in control of their destiny, so why is it that it’s not just the next step in his career?

“If someone leaves Google to go to Apple after three or four years, and then they leave Apple after two years to go to Tesla, and then they leave Tesla after four years to go to DocuSign, nobody is going to say that person ran. Everyone is going to say that person did what was best for their career and best for their livelihood. But us as athletes, it’s never viewed that way and it’s baffling to me that it’s never viewed that way because our lifespan with this career is actually way shorter than someone that’s working at Google or working at Apple or anyone else in the world that’s not an athlete for the most part.

“Why can’t you do everything you can to get it right? Even if that means making a wrong move and continuing on, why is it that athletes are viewed that way? It’s baffling to me.”

In theory, Green makes a solid point. We treat athletes differently than we would, say, an accountant or a plumber. In those worlds, if someone changes jobs every few years, we don’t bat an eye. But of course, it’s not apples to apples when it comes to someone in the NBA. Changing teams within the same league isn’t exactly the same as changing companies in the same industry, though that’s not Kevin Durant’s fault or problem either.

The fact that his two NBA Championships came as part of the Warriors dynasty, and not while he was with the Oklahoma City Thunder or Brooklyn Nets, only adds to all of this.

Sometimes, things just are how they are. And in a sport where we can point to star athletes winning championships without the help of a “superteam,” seeing someone of Durant’s caliber constantly looking to find his next version of that is going to feed into a narrative, for better or worse.

We’ll see where Durant ends up next season, which could even mean he remains with Brooklyn, but the makeup of the roster around him will always be part of the discussion, whether he wins another title or not.