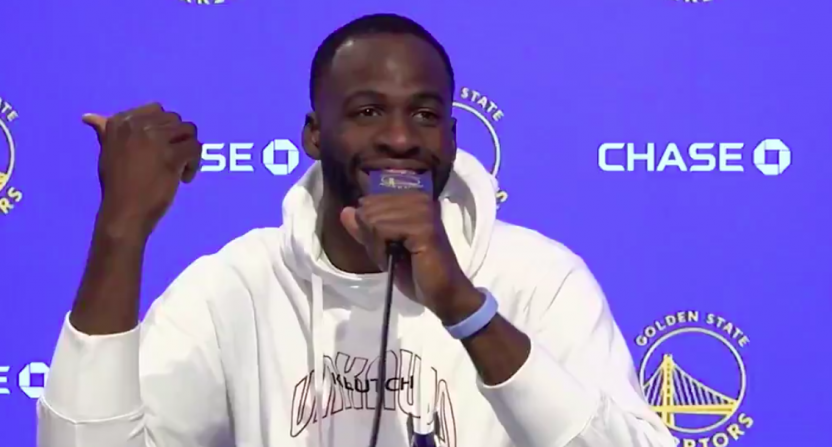 The Golden State Warriors beat the Detroit Pistons pretty thoroughly on Saturday night. But the verbal beating that Draymond Green and Klay Thompson gave to Rodney McGruder might have been even harsher.

After the 118-91 Golden State victory, McGruder started jawwing with several Warriors players. He approached the Warriors tunnel and seemed to have taken issue with something Juan Toscano-Anderson had said to Pistons player Wayne Ellington during the first half. Things got testy enough that he needed to be pushed back in order to avoid escalating things.

Pistons swingman Rodney McGruder just went all the way down near the Warriors tunnel after the game and was yelling at some Warriors players as they made their way off the floor. He had to be pushed back a couple times by Pistons staffers because he was getting heated.

While none of the other Pistons seemed to notice what McGruder was doing, Klay Thompson and Draymond Green certainly did. Thompson wasn’t playing but was instead broadcasting the game from the sidelines. Thompson was close enough to see what was happening and he didn’t like what he was seeing. He was fairly blunt about it on the broadcast.

Rodney McGruder walked over to the Warriors bench after the game so the broadcast team asked Klay Thompson what was going on:

“This dude might be out the league soon, he might be mad about that. Who knows. …Over here trying to start something like he’s a good player or something. It’s like bro, get out of here.”

That the rest of the broadcast crew felt the need to get Thompson to cool it live on-air tells you exactly how harsh it was.

After the game, Draymond Green, never one to mince words, dedicated a sizable portion of his presser to McGruder.

“I don’t know. I was in the locker room. But apparently he was taking up for Wayne Ellington. When the f*** did Rodney McGruder become the tough guy? I don’t know, man, everybody in the league tough these days. It’s crazy. I’ve seen a lot of tough guys this year. I don’t understand it. And don’t nobody do anything. Like if you really wanted to do something, you could have done it. Walking over there talking s*** like he a tough guy. Get the hell outta here. F***ing tough guy Rodney. Tough guy. Also, I’m rocking with Juan T. Juan T was about to bring that Town Bidness s*** out on him. Yeah, I’m rocking with Juan T on that one anyway.

“Also I think it was something Juan said in the first or second quarter to Wayne Ellington. You got nothing better to do that you’re still thinking of something from the first or second quarter when you weren’t in the game. So apparently, Wayne Ellington must have went over to the bench. I guess he went and told Rodney McGruder because he hadn’t been in the game. Yeah, I don’t know. There’s too many tough guys in the league these days for me. But I know no one scared of no damn Rodney McGruder, like f***ing kidding me? Insane. But Klay said it best. Klay said it best. Leave it at that.”

And in case you’re wondering, Toscano-Anderson appreciated the sentiment.

The Warriors may not be the World Champions they consistently were a few years ago, but Rodney McGruder was reminded Saturday that if you’re gonna come for the trash-talking kings, you best not miss.