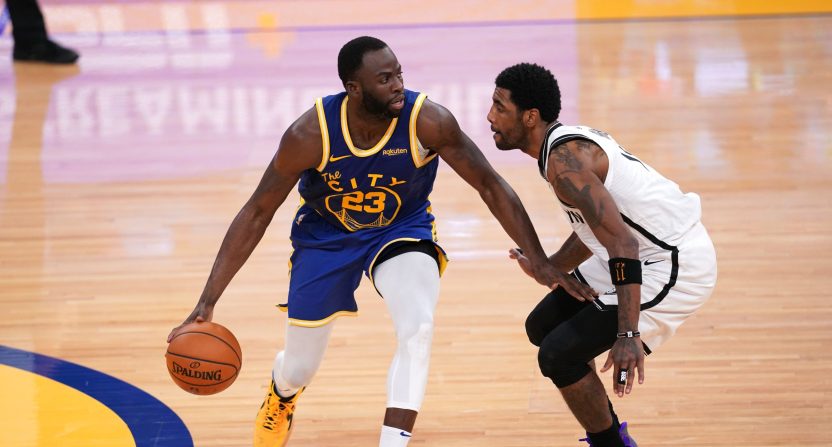 Draymond Green and the Golden State Warriors just won their fourth NBA title in eight years. Meanwhile, Kyrie Irving and the Brooklyn Nets flamed out and the controversial superstar appears to be angling for a trade.

The former shared his very candid thoughts on the latter in a recent interview.

Bloomberg’s Lucas Shaw profiled Green and his prolific rise up the podcast charts during the NBA season. While the piece itself doesn’t include their discussion about Irving, Shaw shared a tidbit that was cut from the article, which includes a very blunt opinion about what Kyrie should do and how he’s failed to be a leader for his own teams.

Sharing a few Draymond outtakes that didn't make the story…

He doesn't think Kyrie Irving will pass up the $30 million to leave the Nets, especially with a big Nike deal set to expire. But if he did… pic.twitter.com/kqldj1eRC7

Green also makes it clear that while he thinks Irving should go to the Los Angeles Lakers, he’s not worried about that team knocking the Warriors off their perch.

“With LeBron James, if you give them someone like Kyrie… they’ll have a chance because of the way Kyrie can score the basketball,” Green said. “LeBron will only put him in a position to do that. Kyrie has not proven to be a great leader. LeBron will put an umbrella over that. If you can do what you’re good at, you have LeBron leading.”

“They could contend, but they won’t beat us.”

Green might want to be careful what he wishes for. The Warriors’ biggest NBA Finals defeat came at the hands of a Cleveland Cavaliers team featuring LeBron James and Irving, who overcame a 3-1 deficit to win the series.