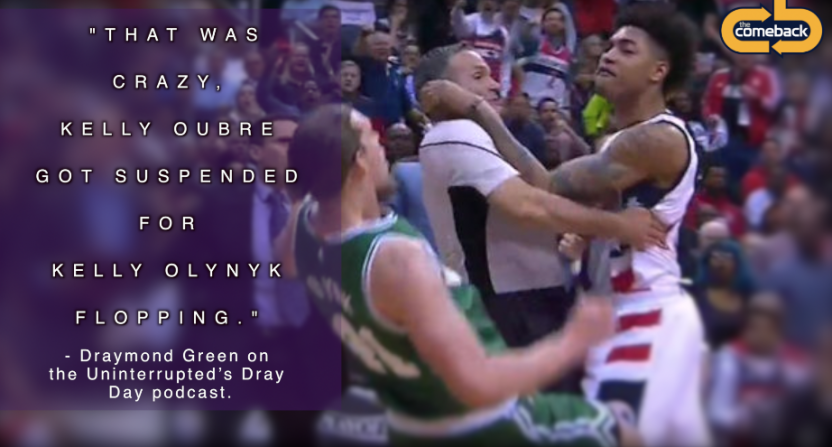 Draymond Green knows a little something about being accused of dirty play in a postseason series. Last spring, the Warriors forward was suspended for Game 5 of the NBA Finals, after accumulating four flagrant fouls, two of which came when he knocked an opponent in the groin.

So Green has a unique perspective on feud between Wizards forward Kelly Oubre and Celtics forward Kelly Olynyk, which resulted in Oubre missing Sunday night’s Game 4 after shoving Olynyk to the ground in Game 3.

Here’s what Draymand had to say, speaking on his Dray Day podcast:

“That was crazy. Kelly Oubre got suspended for Kelly Olynyk flopping. That man took a charge on a push. Like, come on bro. Kelly Oubre hit [referee Monty McCutchen] harder than he hit Olynyk. Like c’mon man, how you gonna take a charge like that?

Then he defended Oubre by asserting that Olynyk plays “dirty.”

“And, Kelly Olynyk is a dirty player. Like you do little stuff dirty, and then you want to take a charge? Come on man. Oubre ain’t hit him that hard, nor should he have been suspended. Y’all already kicked him out of the game. So essentially he’s getting a game and a half suspension for that? Like KD said last night, then they wonder why they call the league soft. Like come on man, it’s playoff basketball, things are gonna get—did he really do something to harm somebody? C’mon man, that’s ridiculous. Why did he get suspended?

“He like body-bumped him. Come on Oubre, if you’re going to charge him like that you’ve got to like bump him with your shoulder. He looked like a linebacker trying to run through the line, then he sees the line when he gets there like uh oh.”

Then back to Olynyk:

“Olynyk caught him in the face and the neck with a couple elbows, and that’s what I don’t understand. You let people get away with stuff, and then finally when somebody reacts, you penalize that guy. But you’re not gonna penalize [Olynyk] for continuing to elbow this guy in the face? I don’t get that.

“He’s dirty. A dirty player. I don’t respect guys like that. I know he’s not the greatest basketball player of all time, so maybe you feel like you’ve got to do that, but you don’t. Just dirty. I don’t respect that man. He’s dirty.

Asked the different between being dirty and just being a savvy veteran, Green got angry all over again, citing the time Olynyk dislocated Kevin Love’s shoulder

“There’s a big difference between knowing all the tricks because knowing all the tricks ain’t doing stuff to hurt people. Come on, you really yanked this dude’s shoulder. I don’t roll with that. Dude’s dirty. Veteran tricks is grabbing an arm so the guy can’t get there to block the shot, you know what I’m saying, or passing the ball and cutting somebody off so they can’t get there to contest. Like, you know, just stuff like that. But you ain’t doing nothing to hurt nobody. Like, this dude be out there trying to hurt people. I don’t rock with bros like that.”

Of course, many people feel Green is not one to talk when it comes to playing dirty, given his history. But in a way, it makes perfect sense that Draymond would side with Oubre here. Here’s a guy being suspended for lashing out during a playoff series. That’s Green’s signature move.

Apparently Draymond doesn’t like the subtleties of physical (or dirty) play that Olynyk is apparently known for. He’s more into the in-your-face brand of physicality that gets you suspended for a game.