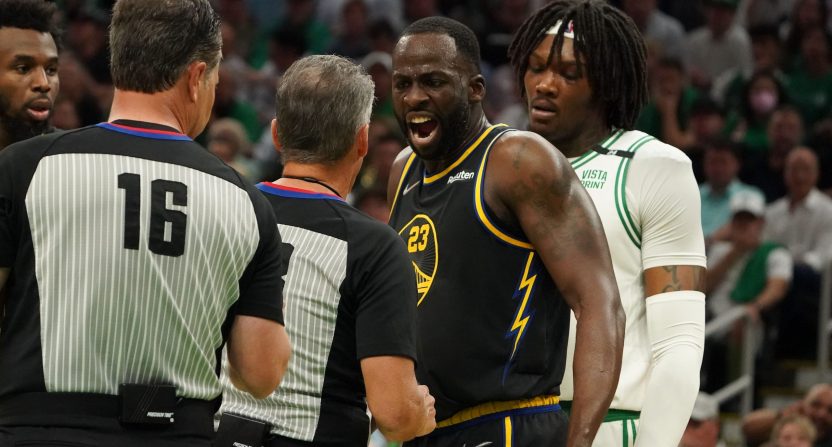 Game 3 of the NBA Finals saw a continuation of what’s been an unfortunate theme for the Golden State Warriors through the first three games of the series — Draymond Green struggled.

Green fouled out of the game in the fourth quarter of a 116-100 win for the Boston Celtics on Wednesday night. That brought an end to a bad game in what’s been a rough series for the four-time All-Star.

He has more turnovers than made baskets. pic.twitter.com/o6MY3TmcFk

As the game progressed, plenty of NBA fans and people in the NBA world were critical of Green and his antics.

Draymond Green played 35 minutes and had more fouls (6) than any other stat. Warriors especially could have used more rebounding from him.

Draymond Green can’t have any more games like 1 and 3 or Warriors are probably losing this series.

Look like Draymond was more prepped for his post game podcast than the actual game. Just an observation, never mind me tho. Carry on…

first 15 minutes of that Draymond podcast explaining why he had more fouls than points, rebounds, or assists going to sound like defense trial testimony.

You gotta bench Draymond man. You have to. He’s not stopping anything. He’s turning the ball over. He’s not rebounding. This is ridiculous

Klay Thompson woke up. The Warriors need Draymond to have an impact.

Draymond has to do more than just scream like Stephen A for four quarters.

GAVE IT HIS ALL🙏 pic.twitter.com/weQrlqu3F3

At some point the officials will need a backbone or it’s only going to get worse with Draymond. This is getting ridiculous

Draymond: “It was a tough game, we just didn’t play well.”

Blaming the entire loss on Green would be unfair. The Celtics had a great night shooting, especially from distance, as they were 21-for-41 on three-pointers. Incidentally, Boston had identical three-point numbers during the Game 1 victory. But Green did not play well in Game 3, nor has he played well in the series. That’s impossible to dispute.

If there’s any good for the Warriors, it’s that they’re still in the series. Golden State trails only 2-1 and if the Warriors can find a way to win Game 4 on Friday, the series will be even and Golden State will regain home-court advantage. But Green will have to play a more effective overall game. He’s never been known for his scoring prowess. So, the Warriors don’t need a big point total from him. But he has to stay out of foul trouble and make better decisions with the ball.

If that can happen, this series can still go either way. If not, Golden State will be facing an even bigger deficit.