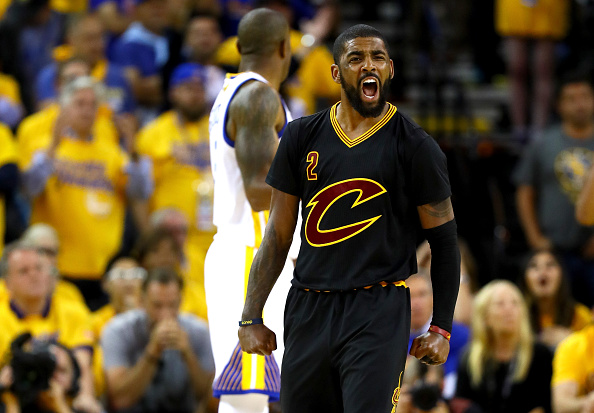 Neither team will admit this, but Draymond Green’s absence was without question the difference in Monday night’s game. With him out, the Golden State Warriors used players in unusual rotations, guys who aren’t usually on the court together. You could see the Warriors struggle with communication on both ends of the floor. They were glancing at each other after Cavaliers baskets with that “Whose guy was that?” look on their faces.

Kyrie Irving and LeBron James were great, but there is no way they both would have scored 41 points with Green lurking in the paint. You don’t have to take my word for it. Just check their shooting stats for the four games they played against the Warriors with Green in the lineup (not counting the two regular season games, in which the Cavs also failed to score 100 points against Golden State).

Is that too “old-school” for you? Here’s one of those new-type analytics stats for you:

Green changes everything, not only by personally guarding guys, but running the communication on the back line of the defense. The other player who does that for Golden State is Andrew Bogut, who missed most of the second half with a sprained knee, and whose availability for the rest of the series is in serious doubt.

The Warriors trailed 67-64 when Bogut left the game. This is potentially a huge loss for Golden State, but it was exacerbated in Game 5 by the absence of Green. The Warriors were also outscored on fast-break points, 28-9. This also is a direct result of Green’s absence. He is Golden State’s best rebounder, and starts fast breaks with either outlet passes or sprints.

We haven’t even talked about the offense, where Green’s screening and passing are so much a part of what the Warriors do. In the first half, their shots were falling and they scored 61 points. But the shooting fell off in the second half and there was no inside presence to go to for easy baskets.

There was one other factor from the Warriors’ perspective that is worth mentioning when you break down Game 5: Steph Curry went back to his struggling self. He let Irving get loose several times, turned the ball over four times, and had only four assists. He had a decent scoring game, but was just 5-for-14 from 3-point range.

That doesn’t sound so bad, but you have to consider that again, without Green, those nine misses are like turnovers. He was missing open looks, too. In fact, the Warriors had eight unguarded 3-point attempts in the fourth quarter and missed them all.

But for the Cavaliers to get Irving and James rolling in such a major way does have a chance to roll over into Game 6, and J.R. Smith is a different player at home. Green might return to the series, but everyone can see – and say – that if LeBron James goes into “God Mode” for just two more games, Cleveland really and truly can win this series.

There’s no getting around this fact. Draymond Green’s inability to resist James’ enticement in Game 4 has cost the Warriors dearly. So far, it’s just extra air travel and another game. But by Sunday, we could be talking about a cataclysmic event that could scar this whole franchise.

Thursday in Cleveland, Green can’t be the guy he was in Game 4 against Oklahoma City following his groin kick toward Steven Adams in Game 3. He was very subdued after dodging the flagrant foul bullet, and the Warriors got shelled. He needs to be active, engaged and on his best behavior, because if he commits a flagrant foul in Game 6, he’ll be suspended for Sunday’s Game 7.

At the three-minute mark of Game 4’s fourth quarter, the Cavaliers had no shot to win the series. Three days later, we’re marveling at James and Irving and how they made themselves a blueprint on how to attack the Warriors (a blueprint which starts with the words, “get Draymond Green off the floor”). The Warriors are 3-0 in Game 6s the past two playoffs, but also hadn’t lost a Game 5 in the last two years, either. Small sample sizes are useless.

The Warriors play extremely well after a loss, especially when people start to write them off. They’ll need all of that guile to get through. I expect them to win Game 6 and finish this improbable season once and for all. But what if LeBron – who recalled Game 6 against the Boston Celtics in 2012 Monday night – stays on that mountaintop while a clearly limited Steph Curry can’t find one more moment of magic?

Every Warriors fan and analyst knows this series would have been over if Green had played Game 5. That’s supposed to be a reassuring thought right now, but for some odd reason – LeBron and Kyrie finding their shooting strokes, which need to be maintained for only two more nights – it offers little comfort.

In 2015, the Warriors were glad to head to Cleveland for Game 6, because Andre Iguodala rescued them in a tight Game 5. This year, the same 3-2 lead is much less a source of relief and far more a cause of irritation. If the Dubs achieve the same Game 6 close-out, everyone will asterisk and ultimately forget about Game 5.

So far, since the beginning of last season, every time the Warriors were severely tested, they have responded. That’s how they won the championship last year, and that’s how they got to one win away from a repeat this year. They thought that Game 4 was that game this year, but were wrong because of a perfect storm of:

** Referee missing obvious foul call on LeBron when he knocked Green to the floor.
** Green reacting to LeBron stepping over him.
** Green’s previous tossing of Houston’s Michael Beasley to the floor in Game 3 of that first-round series.
** Green’s two contacts with OKC’s Steven Adams below the belt, one disciplined, one not.
** The NBA’s willingness to follow its rules to the point that shoplifting a pencil results in a 20-year prison sentence.

So one more time, the Warriors, banged up and with seeds of doubt possibly growing in their minds, must dig down and find the performance that they’ve so far been able to deliver. If they’re successful, the victory will be many times more sweet.