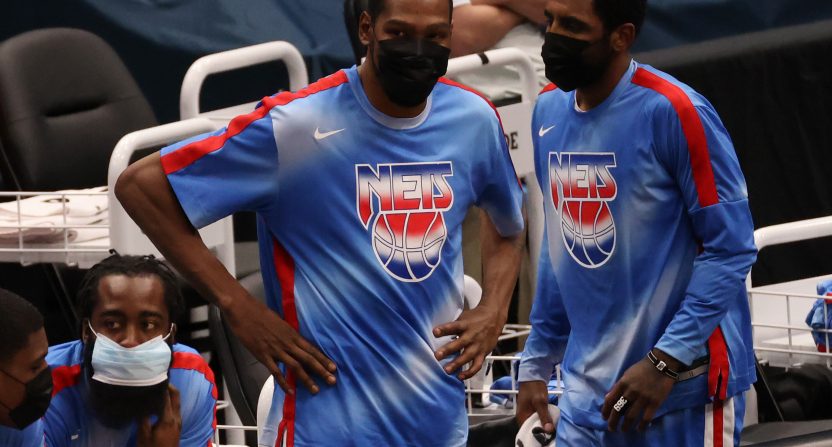 We’re eager to see how and if the Kevin Durant, James Harden, and Kyrie Irving chemistry experiment will work. This is stretching the limits of building a championship team on the fly.

If successful, the net-net for the Nets will be them hoisting the Larry O’Brien trophy in July. It would be the first title for the franchise since before the ABA-NBA merger when they won the 1974 and 1976 ABA championships. If unsuccessful, some people – maybe a lot of people – will laugh at the polarizing and high-maintenance trio of Durant, Harden, and Irving.

No.2-seed Brooklyn (48-24) has the luxury of a built-in excuse: Durant, Harden, and Irving have played a total of eight games together due to injuries. It was seven until this last weekend when Irving (facial contusion) returned for last weekend’s victory over the Chicago Bulls.

Durant and Harden both missed time with hamstring injuries while Durant has only played 35 games after missing last season recovering from a torn Achilles. No team in NBA history has won it all with its three biggest stars playing so few regular-season games together but this has been an unusual season with a truncated 72-game schedule due to the COVID-19 pandemic.

In those eight games, Brooklyn went 6-2. More impressively, in the seven games before Saturday, its offensive rating with all three players was a staggering 122.4. Let’s put that in context. Last year, the Dallas Mavericks were the most efficient offense in league history with a 115.9 rating. This season, even with all the injuries, Brooklyn shattered that mark (117.3).

There were doubters when the Nets traded for Harden in January. Too many ball-dominant guys. Too little defense. They also carry reputations. People don’t like Durant because he routinely fights with people on social media. People don’t like Irving because he’s weird. And people don’t like Harden after the mess he made to force his way out of Houston.

Of course, a high Q rating has nothing to do with winning.

If Durant, Harden, and Irving are healthy, this is an overwhelming attack featuring three guys who averaged at least 25 points per game. That might be enough to overcome some defensive and depth issues. And that could be enough to get Brooklyn to its first NBA Finals since 2003.

This is the Nets’ moment. The one they have been building to ever since they signed Durant and Irving as free agents in 2019. The intent was obvious: wrestle a substantial portion of New York area sports fans away from the Knicks.

The Knicks have long been the No.1 basketball team in town. Just like how the New York Yankees are the No.1 baseball team and the New York Giants are the No.1 football team. For decades, in the pecking order of fan interest among major-league sports franchises, the Nets have historically been at the bottom throughout the tri-state area (New York, New Jersey and Connecticut). They were like a distant cousin that was tolerated at annual family gatherings.

Even when the Jason Kidd-led Nets reached back-to-back NBA Finals as a player in 2002 and 2003, that didn’t really move the needle. They were swept by the L.A. Lakers and fell 4-2 to the San Antonio Spurs. Then the franchise returned into irrelevancy in an aging arena.

When the Nets moved from New Jersey to Brooklyn in 2012, they had a shiny new arena and renewed optimism. Brooklyn hadn’t been home to a major professional sports team since the Dodgers left for Los Angeles in 1957.

The Nets have been rebranding for a long time now. New facility. New uniforms. New players. They are starving to connect with a new audience. You build and sustain fans by staying relevant over a long time and winning a championship.

Brooklyn is making headway as a result. It has popular players with three of the top 15 selling jerseys (Durant, Harden and Irving) at the NBA.com store. A title would elevate the franchise even further.

Getting out of the Eastern Conference won’t be easy. The biggest obstacle might be top-seed Philadelphia (49-23). The 76ers are second in the NBA in defensive efficiency and have likely MVP runner-up Joel Embiid. We haven’t even mentioned the Milwaukee Bucks (46-26) with reigning MVP Giannis Antetokounmpo or the upstart Knicks (41-31) – the one opponent the Nets absolutely, positively cannot afford to lose to.

Great players usually figure it out and talent usually trumps all. Durant and Irving have already won championships and Harden has reached the Western Conference Finals. The pressure will be on rookie coach Steve Nash and assistant Mike D’Antoni to deliver.

The Nash-D’Antoni partnership was seen as an unusual coaching pairing. Nash had no experience, not even as an assistant. D’Antoni had plenty of experience but had never reached the NBA Finals. Both are bright offensive minds in charge a tremendous offensive team. But it’s “championship or bust” and if Brooklyn doesn’t win a title this year or next, they will shoulder the blame.

Nash and D’Antoni must find a way to make this unprecedented chemistry experiment work.