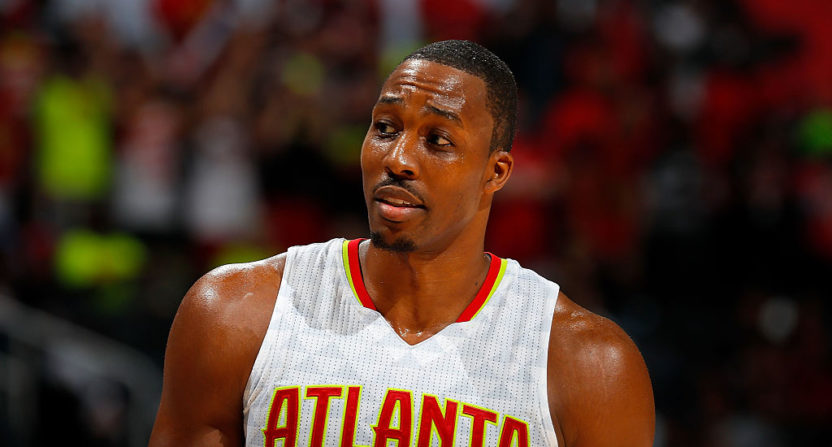 Please help me try to follow this train of logic. Atlanta Hawks center Dwight Howard noticed that he was seeing less playing time toward the ends of games when the Hawks needed someone to hit a critical three.

Howard was on ESPN’s The Jump and mentioned about how he has been working on his three point range.

“I’ve been working on my 3’s, really trying to add some range to my game,” Howard said. “Which is going to be weird for people to see, I guess. They are used to seeing me in the paint battling. But in order for me to play longer, I have to expand my game. The game is not just back to the basket, get the ball in the post and go to work. It’s more stepping away from the basket, setting screens, popping, shooting 3’s and stuff like that. People haven’t seen me do that. It’s going to be an adjustment for me, but also the fans. I think it’s going to be fun.”

Considering Howard has a 9% career three point percentage and the game is evolving toward more of an importance on outside shots, it would be smart in theory for Howard to work on his three point shot.

There’s just one problem with this theory. Dwight Howard cannot shoot free throws to save his life so why is he working on a skill that is much more difficult than one where he still struggles with.

If you thought Howard’s 9% three point percentage was appalling, his 56.6% career free throw percentage is embarrassing. It is an uncontested shot from 15 feet away. It’s a shot that is attempted from the same spot and can be practiced from anyone from a kid in their driveway to an NBA Hall of Famer. Keeping that in mind, a professional basketball player who made $22 million this season just barely made more than half of his free throws in his career.

It’s great that someone, even a 13 year NBA veteran has the drive to learn new skills to extend his career but Dwight Howard needs to be realistic. If you want to be anything but an old school big man who can only score from a few feet away, you need to walk before you can crawl and learn how to competently shoot from 15 feet than shooting from 23 feet.