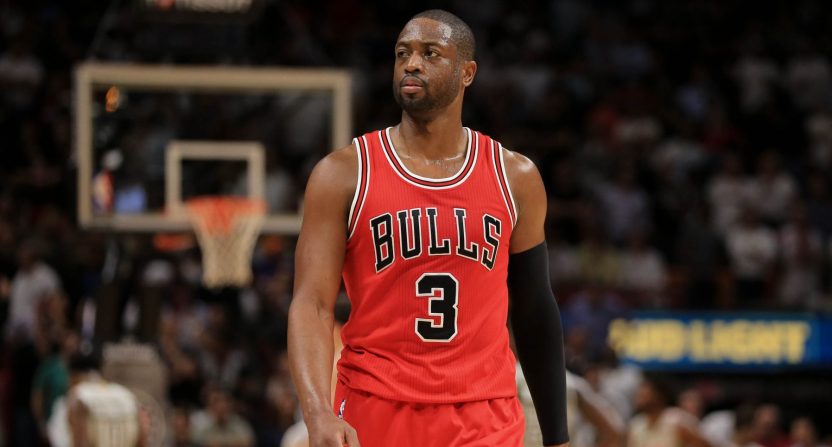 After 12 years in Miami, Dwyane Wade returned to his native Chicago to play for the Bulls. That reunion didn’t quite go as planned. Injuries curtailed the 35-year-old to just 60 games and averaged 18.3 points per game. That’s not exactly terrible numbers but it has shown a drop-off and neither Wade nor the Bulls were satisfied.

As a result, Wade and the Bulls agreed to a buyout of the rest of Wade’s contract. According to ESPN’s Adrian Wojnarowski, Wade is giving up about $8 million of his $23.8 million contract for next season. So while he isn’t getting as much money as he would if he stuck it out in Chicago for a year, he’s still getting paid.

So now the question is, where is Dwyane Wade going to go?

Well, anyone remotely aware would figure out that Wade is going to a title contender. Woj reports that Cleveland, San Antonio and Miami along with Oklahoma City would be contenders for Wade.

Cleveland is the reported favorite and in many ways that makes the most sense. For one, Wade in Cleveland would mark a reunion with his former Heat teammate LeBron James. Cleveland is also the arguable favorite in the East. And if you aren’t going to the Warriors, the Cavs is the next best option. And I’m sure Miami fans would love to see their longtime legend come back.

But exactly what could Dwyane Wade bring to a team. I’m sure Wade feels he’s a starter but he’s 36 and injuries are piling up for him. Wade has seen his minutes drop below 30 per game for the first time in his career and while he’s still a very serviceable player, he is slowly getting into the final stretch of his career. Depending on where Wade is placed, he could be that final piece of the puzzle for a team to take it to the Warriors. They just need to be sure to utilize Wade effectively so he can last to the postseason.