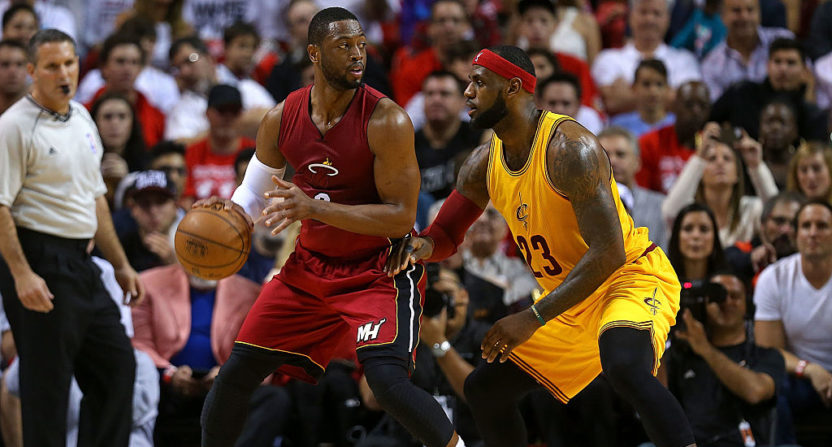 Dwyane Wade will reunite his buddy LeBron James on the Cleveland Cavaliers, according to ESPN’s Adrian Wojnarowski, and he will do so on the veteran’s minimum contract, $2.3 million over one season.

Obviously Wade is not the player he was when he and LeBron led the Miami Heat to two NBA titles. Last season, he averaged 18.3 points per game, his lowest total since his rookie year, while shooting a career-low 43.4 percent from the field. He ranked 193rd in the NBA real-plus minus and 62nd in PER. Wade missed the cut in ESPN’s ranking of the top 100 players in the NBA and came in at No. 74 on Sports Illustrated’s list.

Still, this is a future Hall of Famer, who could certainly recapture some of his magic with a little more rest and a little less responsibility. He should help a Cavs team that has filled out a pretty impressive roster since trading Kyrie Irving.

That is a damn good team. The Cavs’ bench could probably beat a couple opponents’ full rosters in a seven-game series. When Kyle Korver can’t even crack your second line, you know your team is pretty deep.

Of course, many of these players (including Wade) are old and brittle, and you have to expect at least one or two will get injured or see their production collapse. Besides, we don’t know how any of these guys will fit together or whether they’ll all be cool taking reduced roles. Will Wade mind when he gets benched in crunch-time for a hot J.R. Smith? Will Derrick Rose really accept a back-up role? Will that bench unit (and, to some extent, the starting lineup) ever be able to stop anyone from scoring?

Those questions could be the difference between 50 wins and 60 or the difference between an Eastern Conference Finals upset and a real shot at displacing the Warriors. But the Wade signing reinforces that even with Irving gone, the Cavs will be tough for opponents to stop and even tougher for the rest of us to ignore.