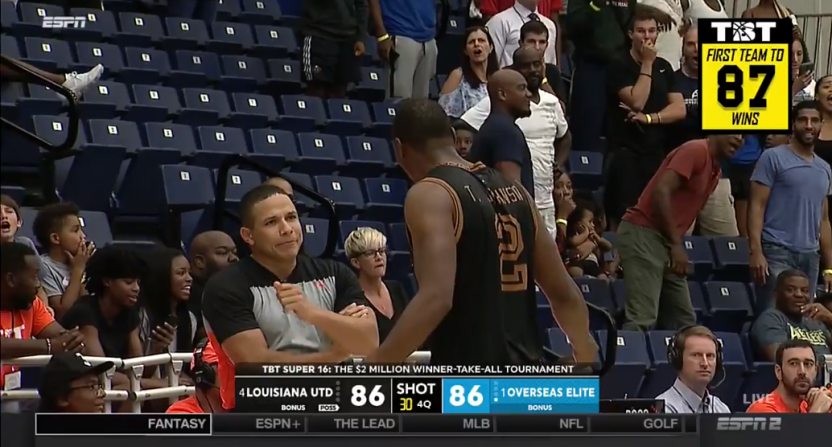 The Elam Ending being shown off in The Basketball Tournament — which features a $2 million winner-take-all prize — has gotten a lot of praise for its unique way to conclude basketball games. We’ve certainly given it some praise at The Comeback, and TCB’s Matt Yoder summarized how the Elam Ending works:

If you haven’t been watching TBT games or if you aren’t incredibly well-versed in advanced statistical theorizing, you probably have no idea what the Elam Ending is. The short attention span explanation goes like this – at the first under-four minute stoppage, the game clock is taken off the scoreboard. The first team to then reach the target score wins. How is the target score set? It is simply seven points tacked on to the score of the leading team at that point.

That’s it. It’s how you probably played on every playground growing up. Of course, with $2 million on the line, it’s a transformational change to the way top-level basketball has been played since its founding.

So, the response to the Elam Ending and The Basketball Tournament has been mostly positive, but Thursday night’s game between the three-time defending champion Overseas Elite and Louisiana United had some controversy.

Overseas Elite took an 80-74 lead into the first stoppage with under four minutes remaining, making for a target score of 87 (80 points from the leading team + 7). No clock and the first team to 87 points wins.

Well, Louisiana United had an impressive comeback in-progress, and appeared to get a stop trailing 85-84. But the referees called a very weak foul on Louisiana United that even had the ESPN 2 announcers stunned and laughing:

Fast-forward to the game being tied at 86-86, and again Louisiana United appeared to force a turnover. But again, an extremely questionable foul was called, blowing what would’ve likely been a game-winning fastbreak for Louisiana United. Instead, it resulted in free throws for Overseas Elite, and they made one, to end the game:

.@ImJustPargo ends an INSANE game between @overseaselite and Louisiana United! The Champs survive 87-86 and advance to their fourth-straight quarterfinals! #TBT2018 pic.twitter.com/QBoIkYOLbN

Here's the call that kept 4x champ Overseas Elite from being knocked out of @thetournament 🤔🤔🤔 pic.twitter.com/k4KWDdns5U

The foul calls, along with the game ending on a free throw because it’s the first team to a target score with no game clock, got plenty of reaction on Twitter:

Overseas Elite couldn't buy a basket once they got within 2 points of the Elam Ending. Once Louisiana Utd got within 3 of the win, the refs put Overseas on the line twice on truly awful calls. Made 1 of 2 both times to win it. https://t.co/dK0fYgaKmR

What a rigged outcome smh. Refs should be embarrassed for what they did to keep Overseas Elite in @thetournament

(1) Elam ending is awesome. That finish was exciting and I love TBT however

(2) disastrous night for the @ElamEnding . Louisiana United played the perfect script and made it exciting (which is the point of the Elam ending). Ref just blatantly ruined it.

(3) I do think the @ElamEnding needs a tweak. Whether it be not winning on a free throw. Only getting 1 free throw. Something. But allowing 2 free throws to win a game on an awful call is just unfair. https://t.co/6KnCOYcd6L

The best example for why I’m not a fan of the Elam Ending… https://t.co/VoCvl0nftf

Watched this tonight to get a feel for the Elam ending. While the comback was impressive, and the lack of intentional fouls was refreshing; frankly, I hated the the game ended on a crap call and a free throw.

@thetournament loving the Elam Ending but I think it should be win by 2. Also I think the shot clock should only reset to 15 or 20 after a foul if its under 10. Lastly jump balls every quarter. Really enjoying the games overall.

So, it will be interesting to see if games like this lead to any tweaks in the Elam Ending/TBT format. Whatever the case, Overseas United moves on to their fourth consecutive quarterfinals in the TBT.