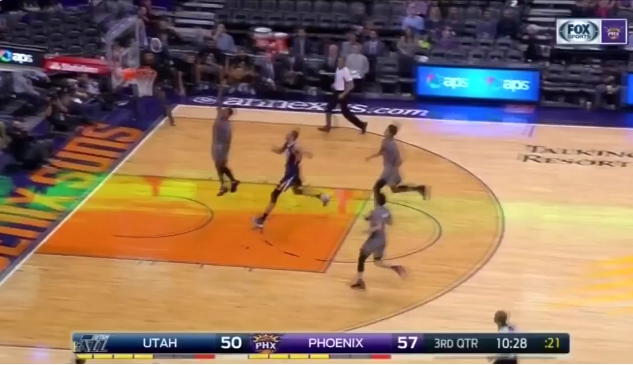 Here’s a play that will drive a coach insane.

Phoenix Suns guard Eric Bledsoe had a wide-open layup (or dunk) in the third quarter of the team’s game against the Utah Jazz on Monday, but instead decided to try a no-look alley-oop pass to trailing teammate Marquese Chriss.

But the closest trailing player was actually Jazz 7’1″ center Rudy Gobert, and Gobert was there to intercept the pass. Chriss did then steal the ball away from Gobert, but was rejected by Gobert on a layup try before getting the ball back and missing another layup.

So, an easy two points turned into a very ugly possession for Phoenix, and Suns TV analyst Eddie Johnson even dropped a Shaqtin’ a Fool reference for Bledsoe’s gaffe. Here’s video:

Eric Bledsoe gets a #shaqtin nomination from his own broadcast crew for a blind alley-oop to Rudy Gobert pic.twitter.com/LKjfJz6fxU

The Jazz then scored two points in transition, and that may have ended up being a very important sequence in a 106-101 Utah win.

To be fair, Bledsoe had a tremendous game overall, with 31 points, nine assists, and nine rebounds. But, Suns head coach Earl Watson may remember this play more than Bledsoe’s overall production on the night.