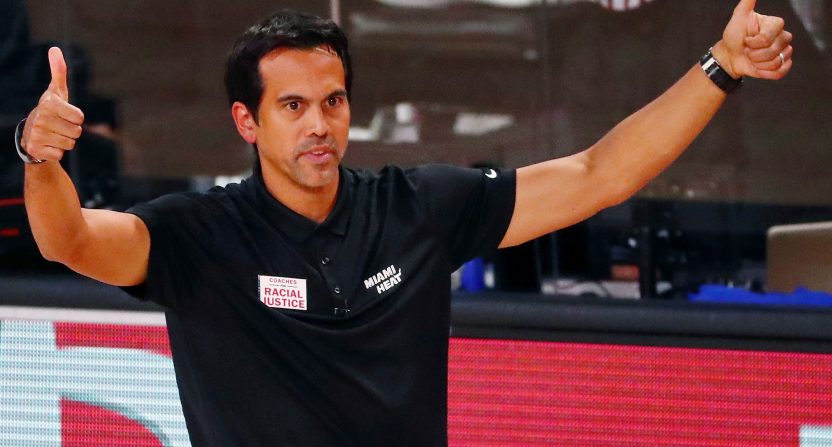 It shouldn’t have taken us this long, but it seems like we’ve finally discovered that Erik Spoelstra is darned good at his job. The Miami Heat are two victories away from a shocking NBA Finals trip. It would be the fifth such appearance for Spoelstra, who guided Miami to championships in 2012 and 2013.

Being in the NBA Finals this time would feel different. And we’re not talking about the antiseptic bubble atmosphere. Spoelstra is gunning for his first championship without LeBron James, Dwyane Wade, and Chris Bosh.

That’s significant. Spoelstra could emerge as the biggest coaching winner in the bubble because he will have proven that he can compete at the highest level with a different roster. Jimmy Butler, Goran Dragic, and Bam Adebayo are good players, but only one was an All-NBA selection: Butler earned third team honors.

Spoelstra has cobbled together an interesting collection of players to lead the Heat on a run that’s starting to resemble the 2004 Detroit Pistons. That was the last genuinely surprising NBA champion. Those Pistons defeated the Shaq and Kobe Los Angeles Lakers, who inexplicably imploded in the Finals.

With Miami’s previous title contenders, the team starting winning once LeBron seized control of the offense and stopped oversharing with Wade. With this Miami team, there isn’t a focal point. Different players have contributed at different times. It might be Butler closing out a game. It might be Adebayo making a game-saving defensive play. It might be Tyler Herro or Duncan Robinson launching a barrage of three-pointers. You never know. That’s good coaching.

Spoelstra has gotten his players to buy into sharing the credit – not easy in the ego-driven ecosystem of the NBA. And he has been flexible with his game plans, not sticking to one philosophy and willing to incorporate new ideas.

Typo in my last tweet, mixed up two digits, but the same concept applies:

Per Synergy Sports. Spoelstra is a genius

One thing that hasn’t changed is his belief in position-less basketball.

In the old days, players had specific roles: a point guard passed, a shooting guard shot jumpers, a small forward scored, a power forward rebounded, and a center posted up and blocked shots. That doesn’t exist anymore, partially due to the evolution of the athletes. Players are a lot more versatile than they have ever been. So, forcing them into roles is not just rigid, it’s foolish.

Forget about regular point guards. Why not use different players to initiate offense? In the playoffs, the Heat have four players averaging 4.0 assists per game, led by power forward (!) Bam Adebayo (4.8). This makes Miami tough to stop.

With his first championship teams, Spoelstra was an early pioneer of position-less basketball. LeBron, Wade, and Bosh didn’t have to play traditional roles because they were complete players who could all pass, shoot, score, rebound, and defend. Therefore, Spoelstra simply put the best five players on the court and trusted them to figure it out. It seems obvious and simple in retrospect because more teams do it. At the time, it was a more revolutionary approach.

Perhaps no player on the current Miami roster embodies position-less basketball more than Adebayo. Call him a center/power forward if you want, but he doesn’t resemble anything like most frontcourt players.

Adebayo is a big reason why Miami has given up the third-fewest points in the playoffs (105.4). The 6-foot-9, 255-pounder Adebayo is a terrific defender who can guard every position on the floor. He was named to the NBA All-Defensive Second Team. Adebayo is a match-up nightmare, averaging 1.0 blocks and 1.2 steals per game.

Credit Spoelstra for making the most of this roster. Miami (44-29) entered the playoffs as the No. 5 seed in the Eastern Conference. They swept No. 4 Indiana and stunned No.1 seed Milwaukee in five games. The Heat held the Bucks to 43.9 percent shooting and limited two-time MVP Giannis Antetokounmpo.

With this playoff performance, Spoelstra has established himself as the best coach in the league not named Gregg Popovich. He’s the second-longest tenured NBA coach, trailing only Popovich. When Spoelstra was promoted from assistant in April 2008 after Pat Riley stepped down, many wondered how the unproven 37-year-old would fare. The former video coordinator was the league’s youngest coach at the time.

In the 2010-11 inaugural season of The Big Three (James, Wade and Bosh), the Heat started 9-8. Riley confirmed that LeBron hinted that Riley should return to the bench to replace Spoelstra.

Riley stuck with his protégé, and Spoelstra delivered four straight NBA Finals trips with a pair of championships. Now Spoelstra is on the verge of another appearance with a far less talented team.

Players are noticing what’s going– and that could have a huge impact in the near future.

Miami is already an attractive free-agent destination due to its weather, lifestyle, and lack of state income taxes. The Heat organization is a proven winner with a steady front office and ownership.

Miami has cleared the books for a run at Antetokounmpo, who will become a free agent next year.

Just imagine what Spoelstra could do with the NBA’s best player. He’s done it before with LeBron.