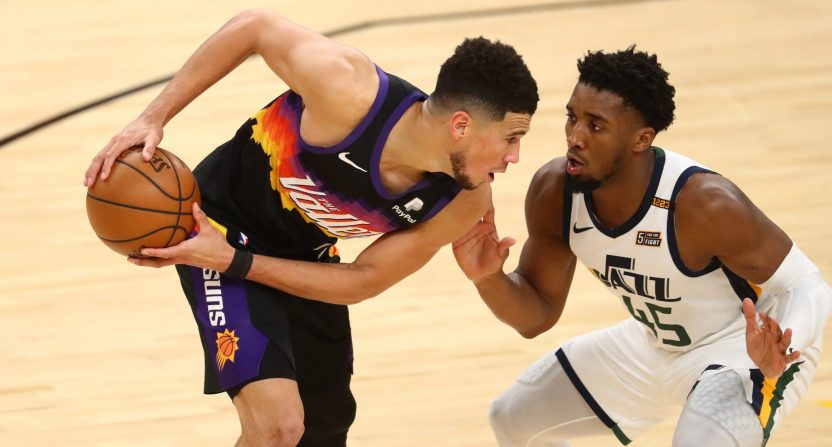 Every year in the NBA, the conversation around contending teams revolves around one question: Who can win the championship? Winning the NBA Finals is an exclusive club, and it’s very difficult to break into it. It’s a short list of teams every year that are capable of doing it.

But we saw last season that the list can expand unexpectedly. No one expected the Atlanta Hawks to make the Eastern Conference Finals. The Phoenix Suns ended up two wins from a ring. Injuries happen, and teams gel in unforeseen ways.

So with that in mind, let’s take a look at every team that might have a chance at winning the Finals in the 2021-22 NBA season. It’s an expansive list, but we know that someone lower down here might prove people wrong. Teams are ranked by tiers:

These are the consensus favorites in the NBA this season, and for good reason: they’re the two best teams in the league, and I imagine the Eastern Conference Finals battle will be one for the ages.

If I’m honest, though, I came close to putting the Nets in a tier of their own. Kyrie Irving is a complete question mark, but even without him, Brooklyn is the class of the league and it might not be close. Barring injury, Kevin Durant and James Harden will be two of the league’s top MVP contenders. We haven’t seen them playing together much at full-strength, but we saw them both put together transcendent stretches last year, including Durant’s all-timer of a run against Milwaukee in the second round. Harden is overlooked as an MVP candidate this year.

The supporting cast is good, and probably better than last year. Joe Harris is an off-the-charts shooter and shouldn’t go as cold as he went in the playoffs again (an ordinary Harris performance would have won them that Bucks series.) Blake Griffin looked rejuvenated after the Detroit buy-out and fit nicely as part of the starting five.

They will have lineup flexibility with Bruce Brown’s jack-of-all-trades skillset, Paul Millsap’s experience as a stout stretch four, and Jevon Carter’s 3-and-D guard skillset. Patty Mills is a great sixth man who can keep up the offensive load when the stars are sitting, and LaMarcus Aldridge might have a little left in the tank as a bench scorer.

Brooklyn will be missing a guard facilitator if Irving is MIA. They’ll hope that rookie Cam Thomas can be that guy, or else they’ll be back on the buyout market — which they project to dominate anyway. The pure force of Durant and Harden makes this team clear championship favorites.

The defending champs got a little better this offseason too, but mostly by virtue of Donte Divincenzo returning from the injury that knocked him out of the playoffs. People forget that Milwaukee was about as close as you can get to losing to a very shorthanded Brooklyn in the second round. Harden’s hamstring is usable again. It’s going to get tougher for the Bucks.

But Giannis Antetokounmpo has clearly figured out the playoffs, and Milwaukee discovered all sorts of answers last year in winning it all. If the Nets show weakness, the Bucks can absolutely pounce again.

A good chance to break into the top tier

This year’s Western Conference is confusing and wide open. The injuries to Jamal Murray (Denver Nuggets) and Kawhi Leonard (Los Angeles Clippers) probably knock two of the top contenders out of the race. The Lakers are in their own tier based entirely on star power.

It’s always hard to doubt LeBron James. He’ll be 37 this year, and injuries have finally slowed him up over the past three seasons, but he might have won MVP last year if he had stayed healthy. Anthony Davis has to find something approximating his bubble level if the Lakers are going to win the title, and that means hitting some jumpers and staying healthy. Davis never really looked like himself last season.

The elephant in the room is Russell Westbrook and his fit. For this big three to work, the Lakers have to emphasize Westbrook’s complementary skills and temper his destructive tendencies. That means giving Westbrook a hard red light on three-pointers and jumpers. Those pull-up bank shots never go in. Keep Westbrook cooking as an offensive facilitator and driver, not as a high-usage shooter.

LeBron is known for getting shooters open looks. Westbrook will not be defended on the perimeter, but rather than catch-and-shoot looks, he can take the downhill driving lanes offered to him. Given Westbrook’s passing chops, those lanes will result in buckets.

The Lakers, especially in big games, have to keep the ball in LeBron’s hands. Westbrook is a turnover machine, and any NBA team that has LeBron James and doesn’t give the ball to him isn’t doing its best to win games.

The supporting cast is questionable at best. Most of these players would not crack a lot of playoff rotations around the league, but will be trusted with huge minutes in Los Angeles. There’s none of the defensive depth that characterized the previous two LeBron-AD supporting casts. Westbrook is a minus defender. Who on this team can take the big assignments and let LeBron rest?

We’ll see over time how the role players evolve and fit into Frank Vogel’s rotation. Someone has to play defense and make some open shots. It remains to be seen to what extent the superstars can overcome any deficiencies in those areas.

Right below the Lakers in the West

To be clear: I think both of these teams have a better chance to finish ahead of the Lakers in the regular season. But they’re just below them overall.

The Jazz are fascinating. The stakes are high for them this season after years of playoff failures with this core. They finished first in the West last season with a system built around shooting, ball-movement, and Rudy Gobert’s offensive and defensive gravity. They have quality depth again this season.

But the Clippers’ five-out spacing knocked them out of the playoffs, pulling Gobert from the paint and feasting on the Jazz’s weak collection of perimeter defenders. The Jazz need to find a way to keep more good defenders on the floor, and they also need Gobert to get some buckets on offense to punish smaller bigs. Deandre Ayton’s playoff paint production is a good blueprint.

The Suns, for their part, are pretty much running it back. Their main acquisitions were backup center Javale McGee and bench shooter Landry Shamet. Those are good moves, but Phoenix is relying on the internal development of Ayton, Mikal Bridges, and Cam Johnson. We’ll see if their outstanding playoff performances portend the sort of leaps that could keep the Suns a finals team.

Also: Chris Paul is going to have to stay healthy again, and continue to defy his age.

Someone from this group will emerge

With no obvious dynasty ruling the NBA, and two of the top teams proven to be fragile, these teams enter the season with legitimately high hopes.

Miami has three star players in Jimmy Butler, Bam Adebayo, and Kyle Lowry, and a potentially ferocious defense. Their depth is questionable, and relies on Tyler Herro figuring things out after a difficult sophomore season. With PJ Tucker and Duncan Robinson, though, the Heat have winning players that fit together.

Atlanta should get healthy after Trae Young and a deep cadre of shooting and playmaking took them to the conference finals. Bogdan Bogdanovic and De’Andre Hunter, both of whom were hampered by injuries last year, are big pieces for this team. After what Young showed last year, the sky’s the limit. Keep an eye on John Collins, who’s now being paid like a star player.

The Clippers and Nuggets have their own reasons to be optimistic despite the devastating injuries. The Clippers have a ton of shooting and defense, and their lineup flexibility remains perfect for the playoffs. Ty Lue is a great coach and will maximize this group. Paul George has taken a team far in the playoffs as the top guy before.

The Nuggets have the reigning MVP in Nikola Jokic, so that always helps. They need a real leap from Michael Porter Jr. to have any chance. Porter will be one of the most interesting players to watch in the league as he takes on a bigger season-long role.

I wrote about the Mavs and Celtics more in-depth in late August. They enter the year with new coaches and younger superstars who have proven themselves in the playoffs. We’ll see if they have the supporting casts to give their stars a shot.

Golden State will at some point get Klay Thompson back, and we saw what Stephen Curry and Draymond Green can create by themselves last year. The presence of those three together means we should never count them out — even though they are reliant on aging vets and unproven young players to fill out the lineup.