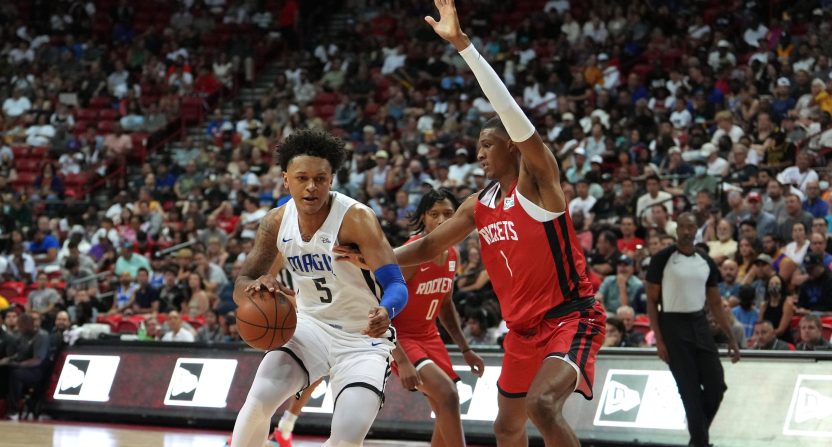 There was much speculation heading into the 2022 NBA Draft, with many draft experts not entirely sure who was going to be the top overall selection.

It was reported hours before the draft by NBA insider Adrian Wojnarowski that the Orlando Magic were likely going to take Auburn forward Jabari Smith with the first overall pick.

Orlando had other plans, taking Duke forward Paolo Banchero with the first pick in a move that surprised many.

Being the top overall selection comes with huge responsibilities and expectations, but that doesn’t seem to be an issue thus far for Banchero through the Magic’s first two NBA Summer League games.

Banchero was impressive in his first game against the Houston Rockets and second overall pick Jabari Smith on Thursday, finishing the game with 17 points along with six assists and four rebounds.

It appears Paolo Banchero may have circled this one vs. Jabari Smith Jr. pic.twitter.com/4igKqOeeiI

Paolo Banchero with the smooth stepback over Jabari Smith.

8 points on 3-3 shooting thus far for the No. 1 pick. pic.twitter.com/fqNwsIpvop

Saturday’s Summer League game for the Magic brought an equally tough matchup for Banchero, going up against the Sacramento Kings and fourth overall pick Keegan Murray.

Banchero did not disappoint, finishing the game with 23 points along with six assists and four steals, while providing a number of highlight plays in the process.

He showed off his excellent back-to-the-basket game in the first quarter, blowing by his defender for a monster dunk.

He then showed off his defensive prowess, getting a steal and then finishing it off with a 360 dunk that certainly got the attention of fans in the arena.

Paolo with the 360 SLAM 😤pic.twitter.com/tdtGATx65g

Banchero then blew by Murray for an easy layup in the second quarter.

Many have taken notice of Banchero’s performance throughout the game, and seem very excited about what the future could look like in Orlando moving forward.

*immediately places a Paolo Banchero To Win Rookie of the Year ticket*
pic.twitter.com/zhGRqajYZo

Tuned in just in time to see Paolo Banchero thrown down a 360 on a fastbreak and Keegan Murray answer right back with a clean three. The first round of the rookie battle is fun.

Paolo Banchero has been impressive in just about every way, everything but rebounding. Just blocked a couple shots in the past few possessions. But the thing that stands out is how competitive he's been, much more so than described leading up to the draft.

While there is obviously still plenty of time to go in Banchero’s career to go, he certainly looks like he not only belongs in the NBA but is also worthy of being the top overall pick in the 2022 NBA Draft to this point.

The Magic have made the playoffs in just two of the last ten years, but things may finally be looking up if Banchero can keep up his impressive play.