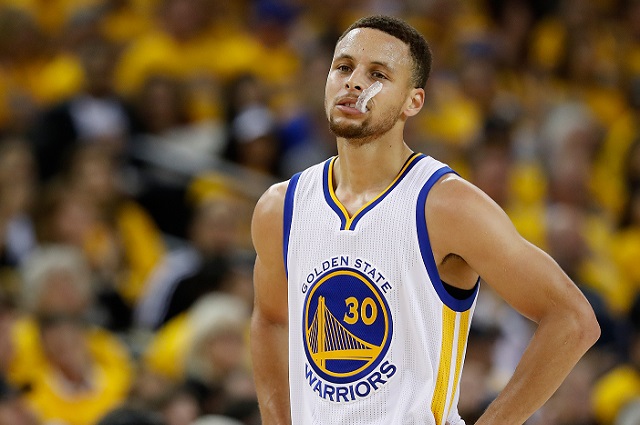 I woke last night to the sound of thunder
How far off, I sat and wondered…
— Bob Seger, “Night Moves”

After a stirring finish to the first half which sent them to the locker room with a 13-point lead, the Warriors played the second half in a dreamlike state. They were unable to do the things they know are crucial to victory: move the ball, defend without fouling, take good shots, value every possession.

When their alarm finally went off, they were in the locker room trying to explain how they blew a double-digit lead in such a crucial game. Winners of Game 1 on the road have won 25 conference finals series, and lost only 10. (See this table — NBA semifinals show the 25-10 record.)

Previously, I wrote how crucial that Game 5 victory against Portland was because I sensed a fatigue setting in on this team. The Warriors desperately needed the four-day break before the start of the Western Conference Finals. That was true even before Andrew Bogut and Draymond Green suffered injuries in that Game 5. The break was enough to get Bogut on the court for Game 1 against OKC, but he aggravated his adductor muscle and his status for Game 2 is uncertain at this point.

Rewatched the Warriors' second-half offense and there's not a lot to like. Too many careless turnovers and early jumpers off the dribble.

Prior to Game 1, I felt this series would be won from the neck up, not the neck down. I made the case that if the Thunder could play intelligently, especially in the fourth quarter, they had a really good chance to win the series. I pointed out that Russell Westbrook’s brain was the most important in the series. If he played under control and didn’t try to play “hero-ball,” he would present huge problems.

Check and check. Got those two right.

What I got wrong, at least for Game 1, was that I held the Warriors up as the standard of intelligent basketball. Defending NBA champions with a 73-9 record (81-11, including the playoffs before Game 1) regularly make the right play at the right time. Yet in spite of all their wins, there have been plenty of times that they got sloppy, turning the ball over trying to make the circus-show play. But those things never cost them a game that I can recall off the top of my head.

However, they did drive Steve Kerr crazy, and it might have been because he knew this game was out there, waiting to emerge. Wrong time, wrong team, get a little careless, and suddenly the home-court advantage you worked for all year is gone. 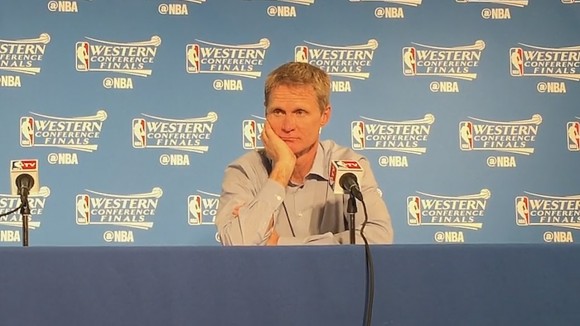 Kerr and all his players spoke with one voice after Game 1. The Warriors all acknowledged that they “weren’t themselves” in the second half. What they didn’t offer was a reason, but I’ve got one.

This team is tired.

From the streak to start the season, to the perfect home record they took into the season’s last month, and of course, to the chase for 73 wins, Golden State played only a handful of “ordinary” games this season. The first four or five games were pretty routine, but then people noticed they hadn’t lost, and the spotlight went on. It never went away.

Every team the Warriors faced seemed to play way above its pay grade, at least for the first half. When Andre Iguodala was hurt and missed 17 games in March and April, the road to 73 got much steeper. Iguodala is the leader of the second unit, but he also plays big fourth-quarter minutes and usually guards the other team’s best scorer. So without him on the floor, everyone else was stretched. Steph Curry and Draymond Green sat out only a handful of fourth quarters during the second half of the season, as opposed to a dozen or so in the first half.

I’m not saying the team should have done anything differently. The Warriors were cruising until Iguodala’s injury. Festus Ezeli was also out at that time, so the idea that they could rest anyone was ridiculous. When your bench has older players like Shaun Livingston, Anderson Varejao,  and Leandro Barbosa, trying to get 48 extra minutes out of it is impossible.

There was also the matter of the San Antonio Spurs, who spent almost the entire season three games behind the Warriors. They also set a franchise wins record, although did rest players in the last couple of weeks of the season… and it did them no good at all.

This was just the hand the Warriors were dealt, and they have to play it. They have three big things going for them:

1) Steve Kerr and his staff are very good at making adjustments. They trailed 2-1 against both Memphis and Cleveland last year, and made Game 4 adjustments that carried them to victory in both series. It’s a little different being down 1-0, because there’s more time for Oklahoma City to adjust to the adjustment, but that’s life in the NBA.

2) They still have Steph Curry, who is also good at making adjustments. My belief is that Curry will take better care of the ball in Game 2, and also figure out a way to get loose for more shots.

3) This team really hates to lose. Monday night was just its 12th loss in 93 games, and the Dubs haven’t lost two games in a row in that span. Sometimes, it seemed Kerr was glad when they lost, because it was the only thing that would get them to focus. Tired or not, they’ll be a different team in Game 2.

It’s important to keep in mind that the Warriors allowed 38 points in the third quarter and scored 14 in the fourth, and were still in the game with under a minute to play. If the infamous Russell Westbrook travel call is made correctly, they have the ball with 17 seconds to go trailing by three, and you know how that movie usually turns out: Hello, Overtime!

Westbrook still traveling as we speak

Lastly, a word about that call: terrible, but not surprising. Several instances of traveling weren’t called, which is par for the course in the league. I’ve heard Kerr say that the referees have so much to watch for now (defensive three seconds, restricted area, flagrant fouls, etc.) that they’ve kind of given up on traveling. As a referee in today’s NBA, you can’t be looking at player’s feet, or you won’t see if he gets fouled.

Whatever. It was a gift, one which OKC is accustomed to at this point. Each of their wins in San Antonio were helped either by calls or non-calls that went their way in the final seconds.

However, the Thunder deserve what they have: They’ve regularly erased double-digit second-half deficits against teams with 67 or more regular season wins. They’re winning the fourth quarters against elite teams, unlike in the regular season. And they didn’t get sloppy late in Game 1.

In his postgame press conference, Steve Kerr said, dryly, “We’d really like to win Game 2.” If they’re going to pull that off, they’ll have to set their alarm, because if Golden State plays another half like the second half of Game 1, the Thunder will breeze past them and take a 2-0 lead to Oklahoma, where the wind comes sweeping down the plain.

Emphasize the word sweeping, because the team which won 73 regular season games will be at risk of falling behind 3-0 in the Western Conference Finals.