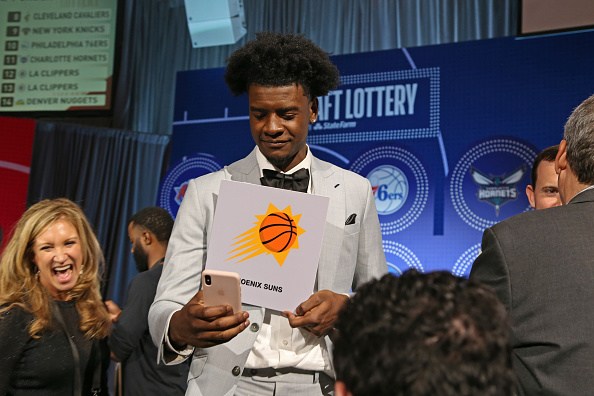 After finishing the 2017-18 regular season with an NBA-worst 21-61 record, the Phoenix Suns knew they had the highest odds of earning the No. 1 pick in this June’s draft. That doesn’t always guarantee the top pick, however. And the Suns had never picked first throughout the franchise’s 50-year history.

But after winning Tuesday night’s NBA Draft Lottery, Phoenix will select first in 2018. The Suns will also get an opportunity to correct what’s been eight straight years of futile play and even more futile roster construction.

Since losing Amar’e Stoudmire to the New York Knicks in the summer of 2010, Phoenix has gone a combined 253-387. They’ve missed the playoffs in each of those seasons, winning 25 or fewer games in half of those years. Being lottery-bound year after year can typically set a team up for success via a young core built through the draft, though that hasn’t been the case for Phoenix.

It’s not that the Suns have failed to draft players that can play at the NBA level; eight of the names on the current roster were selected by the team between 2013 and 2017. But of those, just three (Devin Booker, T.J. Warren, Josh Jackson) saw significant minutes this past season. Phoenix is also on its second go-around in terms of tanking over the last decade, having tried this in the 2013/2014 range, only to trip and fall into a 48-win season where they finished ninth in the West.

It looked like an opportunity to jump back into contention following a four-year absence from the playoffs. Instead, Phoenix ended up with a guard-heavy squad the following year that couldn’t rebound. The Eric Bledsoe-led group dropped to 39-43 while unloading much of the roster as the season wore on, including Isaiah Thomas and Goran Dragic. Ever since, they’ve been treading water with a roster full of young players, draft busts and Tyson Chandler (plus Greg Monroe for a bit). This offseason is a chance to change all of that, however.

Monroe and Alex Len’s contracts both come off the books, freeing up over $20 million in cap space. Elfrid Payton also has a qualifying offer over $4 million. Even if Payton remains, the Suns’ total salaries amount to around $78 million. That’s plenty of room to pursue the types of high-profile signings this summer that have largely eluded them these past eight years. And unlike those previous years, Phoenix will at least look like they’re piecing together what’s needed to compete again.

Booker and Warren are some of the league’s most dynamic young scorers, and both are on the roster for at least another two years. Josh Jackson showed flashes of becoming something in the coming years and he was just a rookie. And beyond Chandler and Brandan Knight, the rest of the assets on the roster are young and on movable contracts if needed.

Then there’s whoever ends up being the first overall pick for Phoenix — the player who could end up changing the course of the franchise and its recent swings and misses.

So many evaluators have seen Luka Doncic as the top prospect in this draft, and while that may be true, the Slovenian standout also isn’t a fit for the wing-heavy Suns. Doncic is 6-foot-8 and 230 pounds, displaying quickness and play-making ability that could be a cornerstone for most rosters… except Phoenix’s, which already has Booker and Warren as shooters there.

In lieu of Doncic, that likely means Arizona center Deandre Ayton stays in-state at No. 1 instead. The 7-foot-1 Bahamas product scored 20.1 points last year to go with 11.6 boards and 1.9 blocks. While the Wildcats ended up getting bounced by Buffalo in the first round of the NCAA Tournament, Ayton still scored highly with KenPom’s player ratings (seventh in the site’s player of the year metric) and was a highly efficient player overall. Ayton hit over 61 percent of his field goals in 2017-18, and even showed some range from three (12-of-35). He also converted 73.3 percent of his free throws.

Maybe most importantly, he already has the size to be an NBA center, weighing in at 250 pounds during the season, and potentially more now. With Len and Monroe out of the way, Ayton can be paired with Tyson Chandler to learn a few pointers from the veteran in the final year of his long-term deal. Suddenly, this a team that’s built for competitive play within the next season.

Ayton would make for yet another potential standout under the age of 26. Booker, Warren, Jackson, Dragan Bender and Elfrid Payton all fall under that age mark and make for a compelling nucleus. They’re also a bigger, longer team in the same vein as the Milwaukee Bucks’ take on position-less basketball, maybe minus the defensive acumen. Payton’s 6-foot-4, but the rest are 6-foot-6 or taller. Add in a tenacious defender and a knockdown three-point shooter (maybe they could even be the same player) and the Suns would quickly arrive in the postseason conversation, even in the vaunted Western Conference.

Phoenix might have messed up the timing twice this decade, but this third try looks like it’s going to work. The first pick in the draft isn’t always a guaranteed star. But with the opportunity to add a player like Ayton, the Suns look like they’ve finally built something during this extended process.