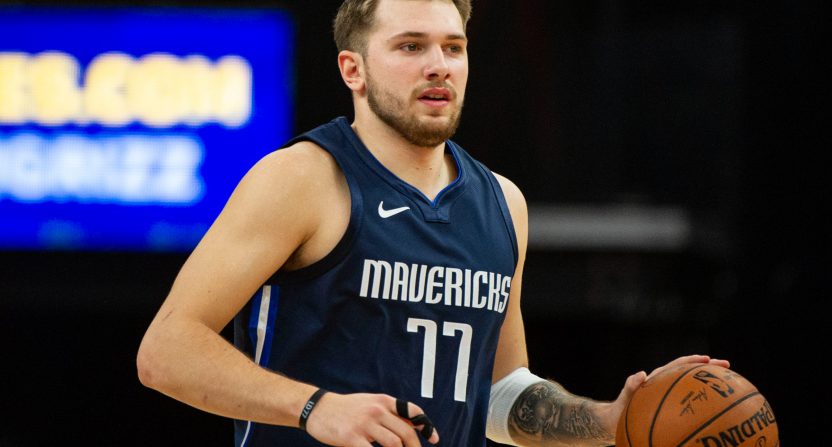 A few weeks into the NBA season, a handful of teams have emerged as better or worse than we expected. They might not sustain, but we’ve seen the Phoenix Suns jump out to a promising start, usurping the stumbling Trail Blazers, who lack production from all non-Damian Lillard players.

Let’s take a look at some of the most positive developments of the early NBA season:

Welcome to the MVP conversation, Luka Doncic. The Mavs are 6-5, and Doncic is putting up ridiculous box score stats. He’s averaging 27.7 points, 10.8 rebounds, and 9.1 assists on 48 percent shooting. His free throw attempts and percentage are up.

The partnership with Kristaps Porzingis will take time to coalesce, but Doncic has clearly taken a leap, possibly into true superstardom. He looks like he’s learned how to leverage his abilities even more than he already was able to. In a LeBron-like way, Doncic is maximizing his newfound gravity, owing to his scoring and, especially, to his insane basketball IQ.

The best players figure out all of the regular on-court reads and then take those reads to the next level. They find passes a couple steps ahead of everyone else. LeBron is the king of this, but every superstar has this ability to some extent (Kawhi Leonard is just now starting to realize his). Doncic has reached that level. He’s always had the cerebral basketball sense, but now he’s paired that with star-level reads:

Other players whip passes to shooters in the corners, but Doncic did not simply find that window to Tim Hardaway Jr.; he created it, in full anticipation of the eventual outcome. Notice how he navigates Boban Marjanovic’s screen, and darts his eyes to Hardaway in the corner. At that moment, Doncic realized that pass was available. He slowed down his dribble and forced Cavs players to gather around him, freezing time and space with defenders all over him.

By leaping in the air as he catapults the ball to Hardaway, he tricks Hardaway’s defender, Jordan Clarkson, into thinking the ball is going to Boban. Clarkson jumps into the paint as a help defender, only to dejectedly realize Doncic has bamboozled him. Hardaway cans the open three.

That was bad defense from Clarkson. But Doncic is playing 4D chess here, and forces that mistake.

If Dallas comfortably make the playoffs (or even if they don’t), Doncic could be first or second team All-NBA. He is that good already.

Things are working for the Kemba Walker Celtics

Having excised whatever happened with Kyrie Irving last year, the Celtics look more comfortable, confident, and creative. Everyone is scoring and performing well. They are more fun to watch than they were last year, despite losing the fun, crossover-heavy presence of Irving.

The injury to Gordon Hayward spoils some of their 9-1 start; Hayward may have been in the conversation for an Eastern Conference All-Star spot. With their most common trio of Hayward, Kemba Walker, and Jayson Tatum on the floor, Boston has outscored opponents by 19.1 points per 100 minutes, and they have similarly impressive net ratings with other combinations of starters.

Questions at center have been minimized to some extent by the emergence of Robert Williams, a lengthy wing who runs the floor. Enes Kanter is available to start against taller, more traditional bigs, and Marcus Smart and Jaylen Brown are very effective perimeter defenders. Move Boston up your League Pass rankings.

The Suns? The Suns!

The Phoenix Suns are the talk of the league, with a 7-4 record and a handful of impressive wins. If voting started now, Devin Booker would be an All-Star. He’s averaging nearly 26 points per game with career-best shooting (with a scorching start from long range), and the insertion of a competent point guard in Ricky Rubio has taken a significant load off Booker’s back. Rubio can initiate the offense, and Booker can focus on probing — Booker’s usage rate is the lowest it’s been since his rookie year.

We’ve seen Booker score in a variety of ways. He is a classic shooting guard in that way. His floater is soft, and his pull-up is effective. He is shooting 70 percent on field goals in the restricted area, an impressive number on high-volume attempts. The Suns are +13.7 when Booker’s on the court and -7.8 when he’s off.

One lingering concern: Phoenix score just 0.75 points per possession when Booker is the ball-handler in the pick-and-roll, one of the lowest figures in the NBA. The number is only slightly higher, at 0.80, for Rubio. They will have to continue to be creative leveraging the outside shooting of Aron Baynes in pick-and-roll situations.

Usually, LeBron uses defense as an opportunity to rest. Given his offensive workload, and his age, it makes sense for him to guard unthreatening players and let other players close out on the perimeter. But he seems more motivated on defense this year. There are fewer missed rotations and teammates get to exert less effort now they don’t seem to be covering for LeBron.

When he’s going for it, LeBron can be a menace. Part of the Lakers’ early success has come from LeBron being a plus on defense.

The John Beilein coaching experience has produced some good early returns. The Cavs sit at a reputable record, and have managed to combine the young guns with the experienced players. Collin Sexton and Darius Garland look promising as a future guard duo. The Damian Lillard-CJ McCollum comparisons won’t stop, though they are very premature.

Cedi Osman can do stuff. Tristan Thompson, back healthy after an injury-riddled 2018-19 season, is having one of the better years of his career. Kevin Love will get All-Star votes. The starting lineup is not getting killed as badly as we thought on defense.

Cleveland butting their heads into a depressing eighth-seed race in the East might still be far-fetched, but there is a (far-fetched) scenario where the Cavs pull off a 38-win season and somehow earn the right to get swept by the 76ers or Bucks. More likely is a trade of either Thompson or Love (or both). Contending teams will inquire.