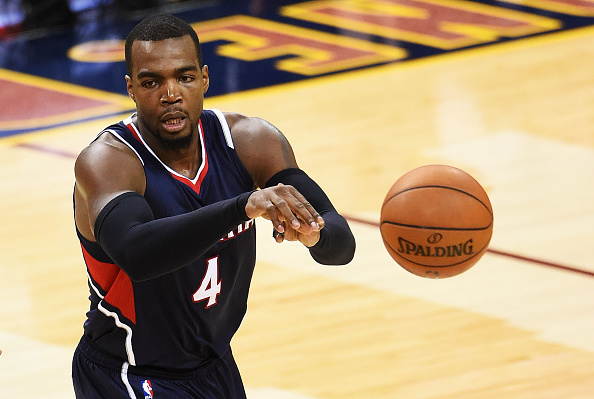 ESPN’s Marc Stein and Brian Windhorst reported on Sunday that the Hawks have started listening to offers on their all-star power forward.

Atlanta’s hovering around the .500 mark and with ESPN’s Chris Haynes’ previous confirmation Millsap will opt out of the final year of his current deal at the season’s end, it’s perfectly logical for the Hawks to look to maximize their assets. Millsap is an above-average defender at the power forward spot, and he can stretch the floor. He’s not a great three-point shooter, but he is efficient from the elbows, and he’s averaging 17.4 points and 8.0 rebounds this year. He’s also been named an Eastern all-star in each of his three seasons with the Hawks, and was named to the NBA’s All-Defensive Second Team last year. Multiple teams will look to acquire the 31-year-old; here are five who might have the best shot.

The Celtics desperately need a big who can score besides former Hawk Al Horford, as Kelly Olynyk is second among Boston forwards with just under eight points-per-game. Center Amir Johnson is a valuable player but is probably better served coming off of the bench. Millsap would put the Celtics over the hump from playoff team to playoff contender.

Dealing Johnson and Tyler Zeller (whose trade restriction lifts on January 17th) would give Boston a match in salaries to acquire Millsap. With a plethora of draft picks, including Brooklyn’s first-round pick in the 2017 draft, Boston has the assets to make a deal.

Acquiring Millsap would represent an all-in mentality for the Raptors. Toronto’s used rookie Pascal Siakam as the starting four, while primarily using three-and-D pro Patrick Patterson in big minutes. Milsap would take pressure off Patterson and give Toronto a formidable starting five.

A deal would have to involve at least one of Terrence Ross, Cory Joseph, DeMarre Carroll or Jonas Valanciunas—all valuable cogs in the Raptors rotation. Throw in a youngster (Norman Powell, Delon Wright) and a few draft picks, and the Raptors could make a deal work. But, is it worth the rental?

The Nuggets almost brought in Millsap in the offseason, so why not try again?

The young Mike Malone-coached Nuggets squad are on the brink of the playoffs. The team is still far from a finished product. Acquiring Millsap would be an odd move to push them over the hump, but it could do that. Denver could use its glut of forwards to bring in Millsap.

Kenneth Faried, one of Gary Harris, Will Barton or Jamal Murray (trading Murray would be unlikely) and a few draft picks would at least entice the Hawks. A front court of Nikola Jokic, Tyson Chandler and Millsap would be dominant. But, unless an extension is worked out, trading for a playoff-push piece like Millsap would be surprising for the Nuggets—unless Denver really likes its chances.

The Wizards have salvaged their season after a rough start, sitting at .500 and in prime position for a playoff run. If Washington is serious about their chances this year, acquiring Millsap would shore up what’s been a disappointing season for Wizards’ bigs.

Markief Morris possesses a similar offensive skillset to Millsap, but he’s a poor man’s version without the defensive versatility. Millsap alongside Marcin Gortat, John Wall, Otto Porter and Bradley Beal would be a formidable starting five.

Millsap to Washington makes sense, but the Wizards don’t really have the assets to make a deal work. The club would need to deal multiple bad contracts to take in Millsap’s salary and would have to include assets they don’t have – unless they think the Brooklyn Nets are going to offer-sheet Porter and want to include him.

He’d be a nice fit, but the Wizards would have to be very creative to make a deal happen.

The Blazers have gone from feel-good story of 2015-16 to a talented train wreck this season. The root of their problems is their bad defense, and lack of a talented big man. Millsap would help both those issues. Portland’s used everyone from Al-Farouq Aminu to Noah Vonleh, Meyers Leonard and Ed Davis with varied success.

The Trail Blazers should be a playoff team and Millsap would help get them back to that point.

Portland values continuity, something they’d have to break up if a Millsap deal was made. But, considering how poorly their season’s gone, it’s a no-brainer to at least have the conversation. The Trail Blazers could offer one of their many forwards on meh contracts, multiple first-round picks and some young talent to entice Atlanta. Like the Wizards, Portland doesn’t have the assets outside its untouchable players to make a great pitch – but if they could make the deal more about quantity than quality, there’s at least a package which could be put together.