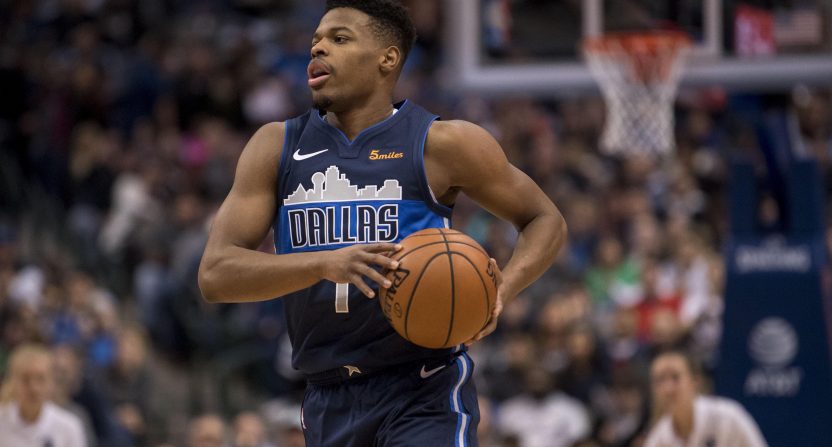 A recent report, relayed by NBC Sports, says the Dallas Mavericks are exploring a trade of 21-year-old guard Dennis Smith Jr. Luka Doncic, the clear favorite for Rookie of the Year while playing Smith’s position, has made Smith expendable, and the Mavs think they can capitalize on the young guard’s value.

Shuttling Doncic into a clear ball-handling role now makes sense, and the promising Smith has value as a young starting-caliber point guard. The NC State product has seen his role decrease with Doncic around; Smith is shooting less and his usage rate has declined to 23 percent, from 27 percent last year.

Any number of teams, from win-now outfits in need of cap-friendly guard depth to long-sighted teams looking for an answer at the point, could have an eye on Smith. Here are a few teams who could use Smith:

Point guard Devin Booker is a fun experiment, but the Suns’ centerpiece projects as a shooting guard. Phoenix need a point guard of the future. Counting on Isaiah Canaan and Elie Okobo and hoping for a Doncic-type godsend in the draft isn’t a sure bet.

Acquiring Smith would give them at least an opportunity to pair Booker with a capable young point guard. Smith isn’t a shooter, but he has upped his three-point shooting percentage by four points this season.

Stuck in mediocrity, the Pistons want to make the playoffs now. Blake Griffin has avoided injuries and is quietly playing well. The same can’t quite be said for Reggie Jackson and Ish Smith, who have seen their production drop with Griffin and Andre Drummond taking over most playmaking and shooting duties.

Smith could provide a salary cap respite (he’s still early in his rookie deal) and a burst of youth on a tall, slow team.

With Elfrid Payton still out with a finger injury, the Pelicans are starting Tim Frazier at point guard, with Jrue Holiday handling more of the ball. Frazier, a 28-year-old journeyman, is a clever cutter and adds some springiness to the lineup, but the Pelicans are inexplicably languishing near the bottom of the Western Conference despite Anthony Davis’s MVP-caliber performance. They may not have a ton of time left with AD. They need to win.

Don’t look now, but the funky, lanky Magic are 10th in the Eastern Conference. While Nikola Vucevic (getting All-Star hype!) and Aaron Gordon have done well patching together the shaky youth of Jonathan Isaac and Mo Bamba, Orlando have struggled at guard.

Jerian Grant has seen growing pains, and DJ Augustin is merely a placeholder. Smith is capable and could be a long-term answer.

Miami are in a similar cap purgatory to the Pistons, though with less win-now urgency. The Heat have rebounded from a poor start, and now await the return of Dion Waiters, who was apparently out with a mysterious injury for months.

With a chance at making the Eastern Conference playoffs with a mishmash roster, Miami could look to Smith as a future piece who can help now.