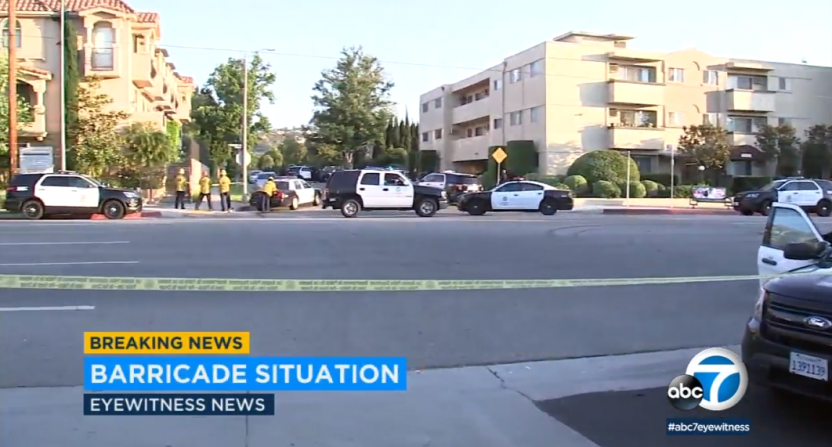 UPDATE: The suspect was found dead early Saturday according to LAPD, and has been identified by family members as Tyler Honeycutt (via ABC7).

ABC7-Los Angeles reports that “a former NBA and UCLA basketball player” in his mid-20s barricaded himself in a Los Angeles area (Sherman Oaks) home on Friday night, after shooting a gun at LAPD.

A name hasn’t officially been reported, but according to several people on Twitter, the LAPD scanner said the suspect is Tyler Honeycutt.

In ABC7’s initial article on the story, they named Honeycutt as the suspect before removing his name.

Since Removed By ABC7, Former @UCLA and @HoustonRockets Player Tyler Honeycutt Was Shooting at Police in Sherman Oaks, CA – It's an Absolute MADHOUSE There With SWAT, Tanks, Etc. This is Serious! pic.twitter.com/deSZvvYUgg

Honeycutt, 27, starred at UCLA from 2009-2011 before being drafted by the Sacramento Kings in the second round of the 2011 NBA Draft. He played in 24 career games, averaging 1.2 points. He was traded to the Houston Rockets in 2013, but never appeared in a game for them. He followed up his NBA career by playing professionally in Israel, Russia, and Turkey. He’s currently listed on Russia’s Khimki roster in the EuroLeague.

According to ABC7, the suspect’s mother called the police and told them her son was acting “erratically.” When police showed up at the residence, the suspect opened fire at the officers, and the officers returned fire. The officers reportedly believe the suspect was still alive “based on text messages.”

Authorities received a phone call from the man’s mother, who said her son was acting erratically. When officers arrived, the man opened fire at the officers, who returned fire.

No officers were injured in the shooting, authorities said.

While officers could not communicate with the man after the shooting, they believed he was still alive based on text messages.

LAPD has released several tweets on the situation, and said it’s “still an ongoing barricaded situation with SWAT officers on scene.”

UPDATE: At approx 5pm Officers assigned to Van Nuys Division responded to a radio call of a Man with a Gun in the area of Riverside Drive & Tyrone Avenue. They made contact with the suspect, a male in his 20’s, and as they were communicating with the suspect an OIS occurred.

No officers were injured & all indications are that the suspect is still alive. He’s believe to be armed & barricaded inside of a residence. SWAT and our Crisis Negotiation Team is on scene. Evacuations have taken place & we expect street closures for several hours

UPDATE: We can confirm that during the initial encounter the suspect fired a shot out of the residence and officers returned fire. No officers were injured and it’s unknown if the suspect was struck. This is still an ongoing barricaded situation with SWAT officers on scene.