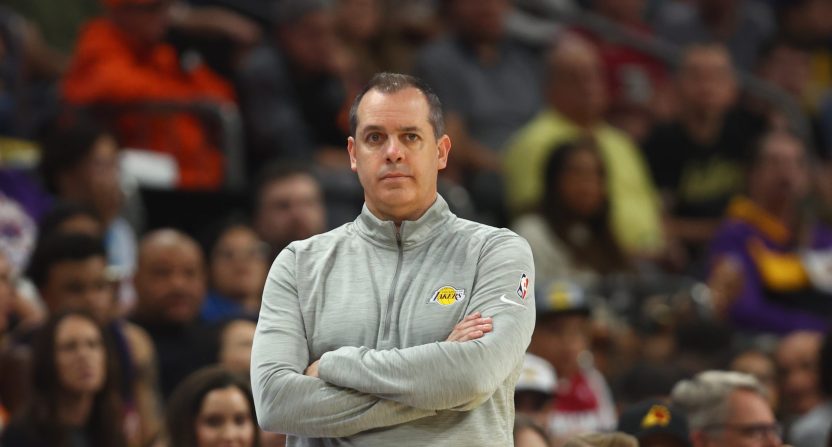 Given how disappointing and miserable this Los Angeles Lakers season has been, it’s no surprise to learn that the franchise is expected to fire head coach Frank Vogel after three seasons. The news was first reported by Adrian Wojnarowski on Sunday night.

Frank Vogel has coached his final game for the Lakers, a decision that’s expected to be shared with him as soon as Monday, sources tell ESPN. Lakers’ search expected to be lengthy and expansive with no clear initial frontrunner.

According to Woj, there is no clear frontrunner for a replacement but the search for a new Lakers head coach begins immediately.

This was all news to Vogel apparently when he was asked about it on Sunday.

“I haven’t been told s— and I’m going to enjoy tonight’s game, celebrate what these young guys did in terms of scratching and clawing and getting back in this game and getting a W, and we’ll deal with tomorrow, tomorrow,” he told reporters.

it was a fairly quick fall for the Lakers under Vogel. The team went 52-19 and won the NBA Championship in 2020 during the bubble season. They dropped to 42-30 in 2021 and lost in the first round of the playoffs. This season has just been an epic disaster for him and the Lakers as the team brought a lot of hype and big names into the year and will miss the playoffs with a 33-49 record.

Injuries, continuity, and consistency were all lacking for Los Angeles this season. And while Russell Westbrook is locked into a huge contract, Anthony Davis will hopefully recover from injuries, and LeBron James is LeBron James, it was clear that Vogel was going to be the first domino to fall this offseason.

Reactions to the news were swift and also damning of the Lakers for making the decision known before speaking with Vogel.

By letting this be reported in the manner it was, when it was, the Lakers robbed Frank Vogel of the opportunity to talk about a really wonderful night for some young players trying to gain a foothold in the NBA. Just a terrible look.

Have they told Frank Vogel yet? I hope no one blew the surprise

No matter what, Frank Vogel will be in a better place. Absolute 🤡 show.

Let’s talk about everything. Play a little music. Laugh. Cry.

Sounds ridiculous, but it would be hilarious if the Lakers decided to fire Frank Vogel without discussing it with LeBron and then leaked it before telling Vogel. https://t.co/nMwA7KLlT9

okay, listen — no one tell frank until monday https://t.co/njNEw3LEPY

if your name is frank vogel and you still have an NBA head coaching job, STAY IN LINE. the lakers are legally obligated to keep you employed until tomorrow https://t.co/ftp4980beP

i know it’s just a coincidence but the fan fiction script of Vogel getting fired just seconds after Austin Reaves goes nuclear and Mac McClung pays homage to Dominique Wilkins at the buzzer could not be written any more perfectly. https://t.co/2maiyk0m03

Vogel put up some very strong seasons with the Indiana Pacers before briefly coaching the Orlando Magic and then winning a title with the Lakers. He’s expected to be a hot commodity for another franchise. And for his sake, it might be the best thing to get fired because the Lakers appear to be a true mess of a franchise right now.