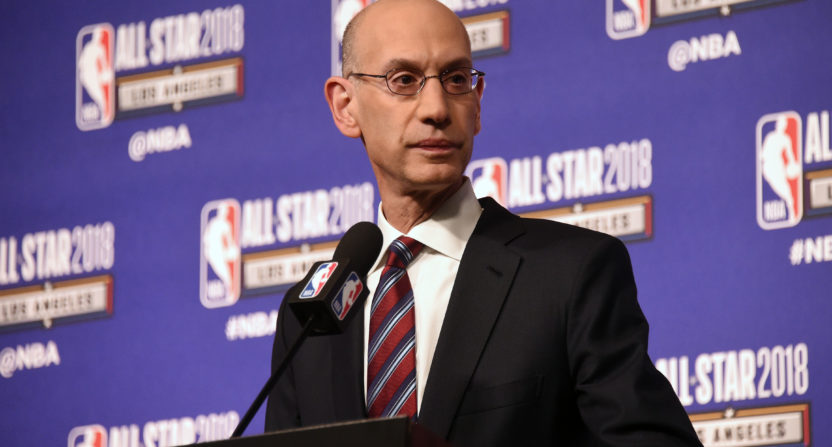 The NBA’s one-and-done rule was implemented in 2006, and while it’s a move that has ostensibly helped NBA franchises scout talent, it has unequivocally done more to benefit the NCAA. A lot has changed since 2006, though, including the viability of the NBA G League, which at the time was in its relative infancy.

That’s not the case anymore, though. Nearly every franchise owns an affiliate now, and it’s a healthy model, something much more akin to AAA baseball than it was in 2006. Today, the G League announced a rules change that is seemingly designed to position the league as a direct competitor to college basketball, as reported by ESPN’s Jonathon Givony:

As part of a newly formed professional path starting in the summer of 2019, the G League will offer “Select Contracts” worth $125,000 to elite prospects who are at least 18 years old but not yet eligible for the NBA draft.

The G League will target recent or would-be high school graduates who otherwise would have likely spent just one season playing college basketball, enticing them not only with a six-figure salary but also the opportunity to benefit from NBA infrastructure, as well as a bevy of off-court development programs “geared toward facilitating and accelerating their transition to the pro game,” league president Malcolm Turner told ESPN.

Obviously in addition to that salary, players wouldn’t be tied down to either the NCAA’s farcical amateurism rules nor their educational requirements. Some prospects have already started sitting out a year to train on their own; this past year, the Blazers took Anfernee Simons with the 24th overall pick after Simons spent a year at the IMG Academy instead of in college. This development has to be terrifying to the NCAA. The one-and-done rule can’t be changed until the next CBA, which won’t come before 2022, but this is just the latest sign that the rule is indeed going to be scrapped.

The NCAA, meanwhile, has to be frightened. Again via Givony:

“We appreciate the NBA’s decision to provide additional opportunities for those who would like to pursue their dream of playing professionally,” NCAA president Mark Emmert said in a statement. “The NCAA recently implemented significant reforms to support student-athlete success, including more flexibility when deciding whether to play professionally.

“Obtaining a college education continues to provide unmatched preparation for success in life for the majority of student-athletes and remains an excellent path to professional sports for many. However, this change provides another option for those who would prefer not to attend college but want to directly pursue professional basketball.”

That the NCAA would feel the need to make a statement at all is telling, not only of how much trouble this could mean for them but also of their sense of ownership over young athletes. The NCAA feels entitled to the services of young talent; why else would they feel the need to comment on this, or push for the one-and-done rule in the first place? These are kids who might go straight from high school to the G League, without a stop under the NCAA’s purview. You’d think Emmert and the rest of the college basketball governing body would have more on their minds.

This doesn’t mean kids are automatically going to pass up college for the G League, of course.

I have doubts about how many top players will go this route. Some, yes. But G-League is full of early connecting flights, long bus rides, small gyms. It isn't glamorous. Big-time NCAA ball still has the trappings of exposure, packed houses, private jets. You'll get paid there too

What will be interesting to watch is whether this actually pushes the NCAA to further relax their own rules on, say, allowing athletes to profit off their own likeness, among other things. That’s a rule change that could help a lot of college athletes, and if this move does push that closer to reality, it’s a good thing.

In other words, there’s no downside.