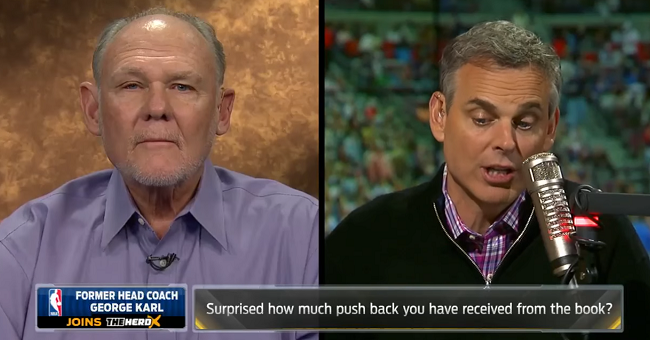 Well, this is getting a bit awkward for George Karl. When you write a book, and you include plenty of controversial statements about household name NBA players, you tend to create, well, controversy.

That’s been the case so far for Karl’s book Furious George. (Is that a good title or not? Still can’t decide.) You might recall the furor that erupted when an excerpt was released detailing Karl’s opinion that players like Carmelo Anthony and Kenyon Martin suffered as players due to a lack of a father in their lives.

On Wednesday, we covered how he’s attempting to backpedal away from a few of those excerpts, and his tone in further interviews is still that of a man surprised at the level of interest he himself has created. That was incredibly apparent during the media blitz he’s been on, which included the aforementioned interview with Sports Illustrated, an interview with WFAN’s Mike Francesa (who mistook him for former Utah coach Jerry Sloan), and interviews with Dan Patrick and Colin Cowherd. In the Patrick interview, you can almost sense Karl’s mental wheels spinning as he tries to avoid saying anything controversial. (Which, again, he had no problems putting in a book.)

“Most of the reaction right now is on excerpts. And reading the book…if you read the book, you’d get a different flow.

…I think I said the fatherhood thing very poorly, in the book. And I never wanted to go there, other than as a coach, you talk about everything. As a coaching staff, you’re trying to do anything to help anybody get stronger, get better, get tougher.

…(on whether having fathers hurt Carmelo and Martin as players)

I can’t answer that specifically, but I think the amount of money young kids are being given, and the opportunities and situations they’re being put in are difficult.

So, nothing was really taken out of context on this main issue, apparently. Here’s the full interview, if you prefer, and credit to Patrick for not letting Karl off easily.

He also went on with Cowherd, who leads off with how he hasn’t finished the book (shocking.)

Cowherd did ask Karl early on about whether he was surprised by the push-back he’d received over the book:

“I was confused, and surprised. I knew there would be some things there, but the piling on, and how big it grew and how fast it exploded, it was confusing. It was at times difficult.”

Cowherd notes it probably helped the book sales, because of course he does. Karl then goes on to mention his coaching ability to handle mistakes, which doesn’t appear to have made him able to handle these ones:

“Every coach is trying to improve their team…we have to find ways, we live in a world of frustration a lot…there’s no question the NBA is about handling mistakes, handling attitudes, handling teammates. It’s all part of being an NBA coach.

It goes on from there. The main takeaway is that George Karl comes across as someone who genuinely doesn’t understand why, as a longtime NBA coach, people would be upset when he makes comments about young black players being hurt in their careers by a lack of a father. Among plenty of other things.

How? How in the world is that surprising? It’s in the book for a reason, and for once Cowherd makes a cogent point. Karl deflected from the sales talk, but it’s either a cynical inclusion, an ignorant inclusion, or just what he thinks and wanted to say. There’s no real way to spin it positively.

Karl is obviously entitled to his thoughts and feelings and experiences, but that doesn’t make him right, and it shouldn’t immunize him from reasonable, thoughtful criticism. Especially from those former players he felt the need to go after, apparently without considering the impending effect of his words beyond their ability to move a few more Kindle editions on Amazon.

Bring up a controversial point? “Read the book.” Have read the book, and it’s just as bad in context? “I shouldn’t have put it in.” That’s not regret, or contrition, or even understanding. It’s spin.

He will sell some books, though.

View all posts by Jay Rigdon