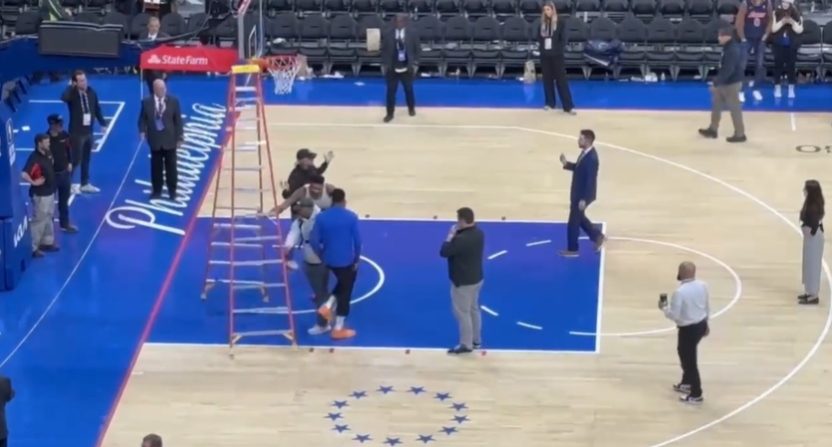 Giannis Antetokounmpo and the Milwaukee Bucks were defeated by the Philadelphia 76ers on Friday night. Antetokounmpo had a bad night from the free-throw line, shooting 4-for-15. Well after the game, he wanted to work on his shot from the line. That led to an awkward exchange between the two-time MVP and employees at Philadelphia’s Wells Fargo Center.

As part of their postgame maintenance, the employees set a ladder up in front of the hoop. Antetokounmpo, who was working on his shot, went and moved the ladder away. When the ladder was moved back, Giannis again pushed it out of the way, this time with enough force to send it to the ground.

(Note: Some foul language is audible toward the end of the video)

Giannis throwing down the ladder and disrespecting the employees of ⁦@WellsFargoCtr⁩ after losing to the ⁦@sixers⁩. pic.twitter.com/DBrRu1nq7K

Philadelphia’s Montrezl Harrell was not happy with what Antetokounmpo did. He was not the only one.

Some people did understand why Giannis was upset with his game. But nearly everyone who saw what happened criticized him.

I got one major rule in life. Dont be mean to people just trying to do their job.
This is a badd look https://t.co/g3NxxZT9yz

my goodness, how full is Giannis' diaper? https://t.co/hu8pWUmUPo

Love Giannis but this is a bad look with all due respect pic.twitter.com/27pQHqYKkK

Is there a Giannis heel turn coming? https://t.co/CDDQ2J8Y7y

super bad look for giannis here, no debate about that. i’m sure he’ll apologize sincerely. https://t.co/vzgKQH8cMv

Well this is very messed up. https://t.co/OUhn4PDQNS

It’s understandable for Giannis to be frustrated and want to work on his free throws, particularly after such a poor game. But this is just a terrible look. Just like Giannis, the arena employees have a job to do. That’s all they were trying to do.

Antetokounmpo wanting to work on his shot is fine. But when it was time to go, he should have gone. Instead, he went the exact opposite route. Now, he’s being rightfully criticized for it.