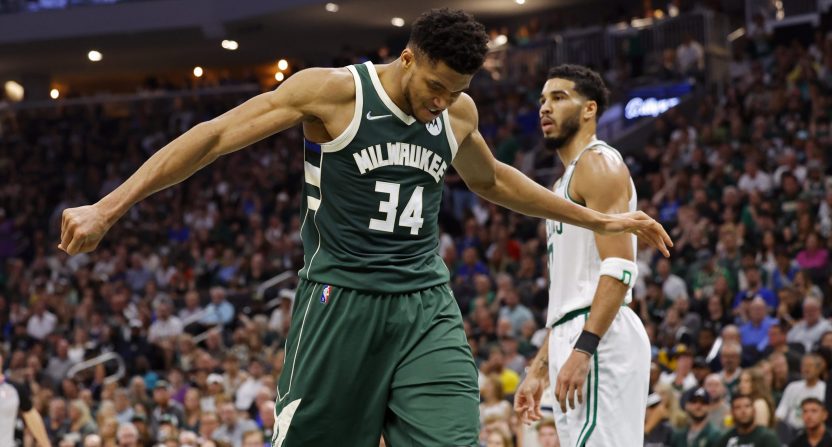 As many of the older stars in the NBA such as LeBron James head closer to retirement, many have been wondering who would take over as the face of the NBA.

An easy answer to many is Milwaukee Bucks superstar Giannis Antetokounmpo, but “The Greek Freak” revealed in an interview on Saturday that he would rather follow the career path of another Hall of Fame player.

Antetokounmpo discussed his retirement plans down the road with Frank Isola and Brian Scalabrine of Sirius XM, where he detailed that he wants to “disappear” once he retires from the NBA.

“When I retire from this game I want to disappear,” said Antetokounmpo. “I want to go somewhere where nobody will know me. “You see MJ, you see Magic (Johnson), all these all-time greats. They retire and people still know them. I don’t know if I can do that. I wanna be like Tim Duncan. Where the hell is Tim Duncan? I want to be able to play the game, and then you forget about me.”

Giannis gives his retirement plans to @thefrankisola and @scalabrine pic.twitter.com/CMFnuc8Rm8

These comments certainly make sense considering Antetokounmpo previously signed a massive five-year super-max deal to remain in Milwaukee instead of opting to go to a team with a larger market instead.

It’s very clear that he is not concerned about the fame or popularity that comes with his status being a top player in the NBA, which makes it unlikely that he will ever be the face of the NBA.

That being said, true NBA fans remember how great Tim Duncan was with the San Antonio Spurs.

Antetokounmpo certainly has the chance to follow in those footsteps in Milwaukee and potentially build a dynasty much like San Antonio had with Duncan.