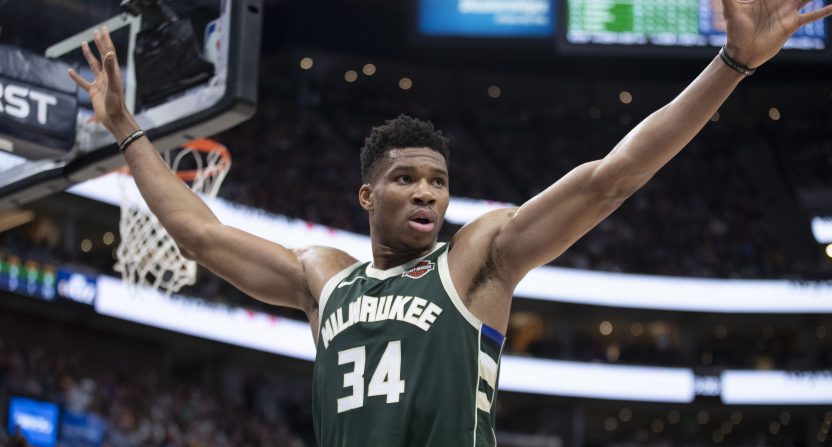 LeBron James put forth his best effort before the NBA’s suspension, but Giannis Antetokounmpo maintains a grip on the MVP award. His Milwaukee Bucks were 53-12 with an overall net rating of 10.7 when the season paused. They’re legitimately one of the best regular-season teams in NBA history, and Giannis is the primary reason. He averages 29.9 points (third in the NBA) and 13.7 rebounds (fourth in the NBA) per game. His 5.8 assists, an underrated part of his game, rank 28th.

It’s also important to remember that Giannis plays fewer minutes than other players because the Bucks dominate so much. By per-36 stats, he’s first by a significant margin in points and rebounds. Milwaukee outscores opponents by 16 points per 100 possessions when Giannis is on the floor. His MVP case is close to unassailable.

One element of his greatness this season that should not go overlooked: his otherworldly defensive impact.

In a year with multiple quality contenders for Defensive Player of the Year, Giannis has risen above. His defensive rating of 96.5 leads the league, and the Bucks as a team give up just 101 points per 100 possessions, three points fewer than second-place Toronto.

Giannis is the defensive engine, covering every spot on the court with his wingspan and quickness. He’s surrounded by smart, effective defenders (particularly Brook Lopez, who also has a real case for DPOY) who give Giannis freedom to roam and disrupt.

Defensive impact can be tough to quantify. Giannis rates very well by any measure. He leads the league in defensive win shares and defensive box plus-minus, and ranks third (tied with Lopez) in FiveThirtyEight’s defensive RAPTOR metric. When he’s the primary defender at the rim, he gives up a field goal percentage of just 41.8 percent, by far the best in the league. His overall defensive field goal percentage is 36 percent, the lowest in the NBA among players who defend at least nine shots per game.

Milwaukee’s defensive dominance with Giannis on the floor is further indication that he has been the best defender in the league this year. The Bucks gave up eight points fewer per 100 possessions with Giannis than without him, impressive considering that even without him, they conceded just 104.2 points per 100 possessions, a figure that would rank second in the NBA. Giannis carried the Bucks from good to great.

Mike Budenholzer’s defensive approach borders on radical, to the point where only a team with the Bucks’ individual defensive abilities could execute it. Budenholzer has his rim protectors (Giannis and Lopez, primarily) drop to the rim in pick-and-roll situations, aggressively protecting the basket. The crux of the strategy is to concede three-point attempts in exchange for preventing high-percentage looks at the rim.

While this approach may seem contrary to modern knowledge of basketball, it has uniquely worked for the Bucks thanks to their defensive talent up and down the lineup. They concede three-point attempts to the right players, and when ball-handlers take the lane Bucks guards give them, Giannis, Brook Lopez, and Robin Lopez swallow them whole.

Eric Bledsoe, George Hill, and Donte DiVincenzo are high-caliber defenders at the point of attack (particularly Bledsoe, who has a case for a spot on an All-Defense team). Those guards are adept at chasing ball-handlers over screens to deny pull-up threes to good shooters. When opposing guards drive, Bucks point-of-attack defenders hang on their back-shoulder, affecting shots from behind and rotating to shooters if necessary.

Giannis is one of the only players in the NBA who can guard all five positions at an elite level. He at times ends up as the on-ball pick-and-roll defender, and his mobility and length destroys opponents, to the point where it becomes difficult for players to even make a productive pass around him.

This video compilation from last year is a good illustration of the Bucks’ drop coverage, and how Giannis disrupts so many plays:

For this all to work, players like Bledsoe and Hill have to play high-level on-ball defense, and make smart in-the-moment pick-and-roll decisions. Funneling players to the rim — and encouraging three-pointers — backfires if the funnelers concede too many threes to the wrong players, and if the players at the rim aren’t sufficient enough deterrents.

The Bucks combine both elements. The guards are intelligent, physical defenders who keep players in front of them, and the Lopez brothers aren’t far off of Giannis’s pace in defensive field goal percentage.

One counter to this system is opposing ball-handlers using the space afforded to them in the lane to find cutters and shooters elsewhere. Good passers relish time to settle down and find a teammate after carving into the defense. But Giannis’s length and presence in every passing lane serves as a major deterrent. He waves his hands anywhere a savvy ball-handler might see a lane, and he runs shooters off the three-point line with peak LeBron-like ferocity.

In the playoffs, the Bucks could see problems against teams that reign threes. A player like Kemba Walker, who thrives on pull-up top-of-the-key triples off of screens, could draw Lopez or Giannis out to contest. A couple of unsustainably good shooting games from an inferior team would be the Bucks’ worst-case scenario. But they’ve proven up to this point that they are by far the best defensive team in the league, and one of the best in recent memory.

Giannis is the heartbeat of the operation, a modern switchable defender who goes everywhere and disrupts everything. He is the Defensive Player of the Year, and he should cruise to a second-straight MVP as well.