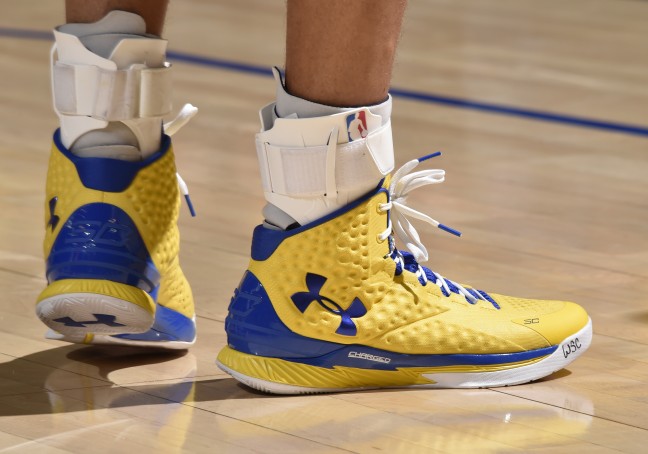 The first weekend of the first round of the NBA playoffs was so awful that a mildly tweaked ankle is one of the biggest stories out there. Of course, the fact that the ankle is connected to the rest of Steph Curry, and by surgically repaired tissue does raise the stakes a little bit.

I was asked on a radio show Sunday night to talk about the “severity” of Curry’s injury and its potential to affect the Warriors’ hopes to repeat. My answer: “Severity is way too strong a word.”

I will cover the options the Warriors have, which might have diminished Sunday when Shaun Livingston went home from practice early because he was sick. First, however, there are a couple of things for us armchair athletic trainers to take note of before we make a diagnosis and start writing prescriptions.

Here's the ad Under Armour won't show you https://t.co/jzmWefmKY0

1) Curry really wanted to play in the second half on Saturday. He likened sitting on the bench to a child being held in “timeout.” While anyone who has followed his career will tell you he’s a lot tougher than he looks, I doubt he would have been fighting to get back into a 25-point game if the ankle was dramatically limiting his movement.

2) Notice that Curry, after a couple of trips to the locker room to get the ankle re-taped, spent most of the second half on the bench. No ice, no elevation, no treatment at all. Again, if this injury had any degree of “severity” to it, that would have not been the case.

While those notes give you an idea of what’s going on, neither means for sure that Curry will play in Game 2. He didn’t practice Sunday, and will be evaluated on Monday before and after more treatment. Only then will the team make a decision. There are two days off between Games 2 and 3, and it has to be tempting for the Warriors to give Curry four solid days of treatment with no games, therefore no chance to re-injure the ankle.

Let’s also keep in mind that the Houston Rockets are a dumpster fire, a shell of the team the Warriors might have swept in last year’s playoffs had they not knocked Curry on his head, and won Game 4 due to Steph’s prolonged absence.

The Warriors needed the last three games of the season to break the NBA record for wins. The Rockets needed to win the last three games of their season to make the eighth spot in the West. That tells you all you really need to know, and the Warriors could easily rest Curry in Game 2 and have a realistic expectation of going up 2-0. Even if they lost, they are in no way at risk of losing the series to Houston.

However, what does it mean to the Warriors to beat Houston in five or six games, rather than four? Every game over four means another three-and-a-half hour plane flight. Games 5-7 are also closer together on the calendar, with just one day off in between.

They do have one game to “play with,” so to speak. Even if they sweep, they have to fly home. A Game 5 doesn’t change that, but if they lose two somehow, and you throw a Game 6 back in Houston into the mix, that’s another kettle of fish.

The extent of Livingston’s illness is not known (at least by me) at this point. That’s a wild card. If he can’t go Monday, the Warriors may have to decide between a slightly affected Curry or Ian Clark as the starter, with really no backup. Leandro Barbosa is not a point guard, and he generally spells Klay Thompson. Andre Iguodala can handle the ball when the second unit is on the floor, but he’s usually replacing Harrison Barnes, not a guard.

I’ve said all season that as great as Curry is, this team is as dependent on its backups as any NBA champion since the 1975 Warriors. That team went 10 deep all the way through the playoffs, and this one does, too.

When Andre Iguodala was out for 17 games, the Warriors struggled at both ends of the floor, even when Curry was in the game. When he was on the bench, it got pretty ugly at times. The Warriors won 15 of those games, so people not watching the games didn’t notice.

Livingston, while not as crucial as Iguodala, is not a guy the Warriors could do without for very long, and to lose him for even one game when Curry doesn’t play would be very difficult. Livingston is 6-foot-7, and can post up any 2 and most 3s in the league. He’s a very good passer, and his length bothers opponents when he’s on defense.

Whether Curry plays Monday night or not, a really important thing to keep an eye on is the play of Harrison Barnes. He was playing pretty well during the last 10 games of the regular season, but struggled massively in Game 1. Without Curry on the floor, the Dubs need a 3-point threat across the court from Thompson, and Barnes is that guy. Draymond Green, while a decent 3-point shooter, is only effective from the top of the key, so he doesn’t create space for Thompson the way Curry does. Barnes can plant himself in the far corner, and if he makes a few shots, that will help Thompson get better looks. If Barnes is ineffective, the defense sags, and it’s much harder for this team to score.

It is unlikely that the Warriors will ask me what to do Monday night, but if they do, I’m going to tell them to sit Curry even if Livingston can’t play. There is not a joint in Oakland more important than that ankle, and the Warriors have to feel that even if they lose this game, they’ll still win the series and have a better chance to win the whole thing without the ankle problem lingering.

This is, of course, where I have to remind myself that while the Warriors used to need the help of invested local observers with the operation of their team, those days are gone. This is no longer the bumbling regime which preceded Joe Lacob’s ownership and Bob Myers’s tenure as general manager. They’ve done everything right, starting with replacing Mark Jackson with Steve Kerr, so I guess I can leave this one up to them.