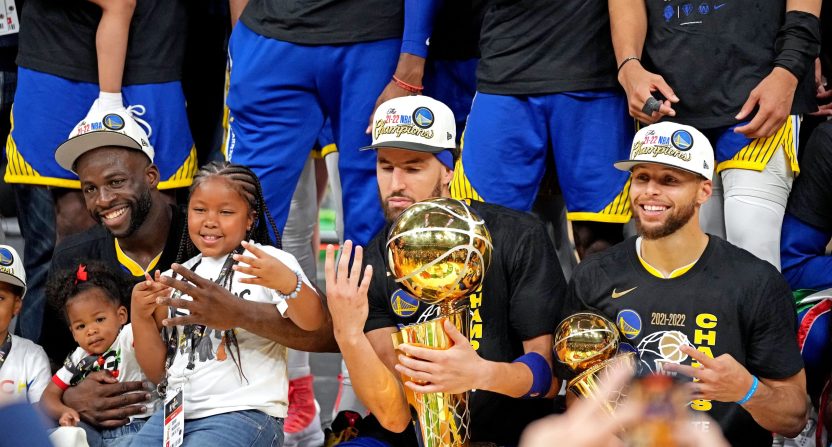 Steph Curry let out tears of joy after the Golden State Warriors won the 2022 NBA Finals with a 103-90 Game 6 road victory over the Boston Celtics on Thursday night.

The Golden State Warriors are NBA champions for the fourth time in eight years!🏀🏆 pic.twitter.com/FmGNt20wU9

Winning a championship is a familiar position for Curry, but the circumstances were new. The Warriors did it as legitimate underdogs after two years off the map, when their dynasty looked like it might be at the end of the road. They revamped and retooled from two years of injuries, and came back stronger. They proved the doubters wrong.

The ESPN BPI gave the Warriors just a 14% chance to win the NBA Finals entering the series. https://t.co/EVwt5g5Wth

The incredible three-man trio of Curry, Klay Thompson, and Draymond Green has once again been vindicated in the greatest possible way. Curry has his championship as a lead dog, propping up a team that needed him more than ever. He produced signature Finals performances in Game 4 and Game 6 against the swarming, all-time-great defense of the Boston Celtics. With a Finals MVP finally on his trophy case, he has no gaps in his resume.

"Some Curry chaos here in the third!"- Mike Breen pic.twitter.com/tWniQqrEht

Thompson missed two full years with a torn ACL and a torn Achilles. There were endless questions about whether Thompson could play at a high level after those devastating injuries. He answered them, and even though he was not the same Klay as he once was, he was an irreplaceable part of the championship run.

Green might be the most unique player in league history, the engine of the system that has propelled the Warriors to these great heights. He rampaged to nowhere during those years in the darkness, unable to singlehandedly elevate weaker teammates. But with the big three back together and better-supporting players around them, Green, the best defensive player of this generation, came back with a vengeance. For all the controversy and the weak playoff performances, the Warriors would not be here without him.

The combination of these three players is the ultimate cheat code in NBA history. It was easy to forget that when they added Kevin Durant to the equation for three years and became an inevitable juggernaut. Their lovable underdog status vanished as they grew into the best collection of talent the NBA had ever seen, nearly guaranteed a ring as long as they were healthy.

But at the core of the Warriors has always been a big three — plus the venerable Andre Iguodala — that nurtured and grew together over the years, developing impeccable chemistry and crafting an offensive system that warped the league. Confounding every defense they’ve faced, Golden State has found a way to play differently from everyone else.

One lesson from the past two years of rock bottom is how important it is that they find players who can handle the system. Not just anybody, even exceptionally talented NBA players, can cut, screen, and pass at all the right times, and make the necessary split-second defensive rotations. The Warriors are a complex team.

Those dark years, first when they tanked as a result of a Curry injury and then when they lost in the play-in tournament, were partially defined by how many ill-fitting players they had. Needing to retool with Durant leaving for Brooklyn in the summer of 2019, Golden State ultimately added players like Kelly Oubre Jr., D’Angelo Russell, Kent Bazemore, and James Wiseman. They filled minutes with struggling young players. They lacked true Warriors.

Amid the struggles, many forgot how incredible that system was. Even though Curry and Green caused havoc in the 2021 season, they didn’t have the same juice without guys who could reach Golden State nirvana. That’s why Thompson’s return was so important.

But this 2022 team was more than those three guys. A lot of credit goes to Golden State’s management, which understands how their team plays and has made a concerted effort to build the team with that in mind. Their best move was flipping Russell for Andrew Wiggins, a wayward former No. 1 pick who needed a better environment to succeed.

Wiggins changed everything about this team’s ceiling. He gave them the much-needed wing presence that was once occupied by Harrison Barnes, and then by Durant. His Finals performance was particularly excellent, playing lockdown defense on Jayson Tatum and providing timely and clutch shotmaking, to go along with tenacious rebounding. Wiggins, capable of defending the league’s apex wings, provided diligent defensive effort. He did an admirable job on Luka Doncic in the Western Conference Finals. He’s also the player they trust to go get a shot of his own when the system doesn’t generate anything. Their second-best player in the Finals was not Thompson or Green: it was Wiggins.

Kevon Looney was a crucial presence, a center who is the quintessential example of a player who can handle the demands of playing for the Warriors. They witnessed the blooming of Jordan Poole, a bench scorer who combines the skillsets of Curry and Thompson and represents the franchise’s impressive line-toeing between the present and the future. They nabbed Gary Payton II off a scrap heap, discovering a top-tier perimeter defender who plays positionless basketball, setting screens and finishing at the rim despite his point guard size. They picked up the wily veteran Otto Porter Jr., an intelligent player with size and shooting skills. Backup center Nemanja Bjelica is another crafty player with nifty passing and slick shooting.

The point of all it: the Warriors understood themselves and invested in their style of play. They trusted that the Curry-Thompson-Green core is instant victory, and gave them the supporting cast that would be necessary to reach their previous heights. In the playoffs, they beat different types of teams, and never ended up truly scared. They beat the impressive Celtics in part thanks to veteran experience and championship pedigree.

At the center of it all, of course, is Curry, without whom none of this would be possible. Curry has maximized his own effectiveness over the years, understanding how to break every type of defense. Even when he shoots poorly, like in the Warriors’ Game 5 win in the Finals, he still has a massive impact, drawing defenders and initiating Golden State’s ball movement. He has mastered all the intricacies of switching onto superstars like Doncic and Tatum after years of being targeted by LeBron James. Curry bulked up, and that muscle proved valuable on both ends against the tough Celtics.

It was an emotional season for him. He started the year on fire, but he went on uncharacteristic slumps as he embarked on a highly-publicized chase to break the all-time record for three-pointers. He got injured in a regular-season game against the Celtics and saw his team struggle late in the year without him. On a minutes restriction, he came off the bench in the first-round sweep of the Denver Nuggets.

But his playoff performances were characteristically excellent. Golden State outlasted the young, deep, and versatile Memphis Grizzlies in the second round, a team that reminded of the 2015 Warriors. They ate up Doncic’s Dallas Mavericks in the conference finals after the Mavs decimated the supposed favorite Phoenix in Game 7 of the second round. Then came the Finals, where the Warriors went down 2-1, just like they did back in 2015. But, like that first championship year, they won three straight to secure a ring.

Heading into the playoffs, it looked like one of the most wide-open postseasons in recent memory. Plenty of teams had reason to believe and hope that they could contend for a championship. But as it turns out, when the full-throttle Curry-led Warriors are around, it’s never as open as you think.