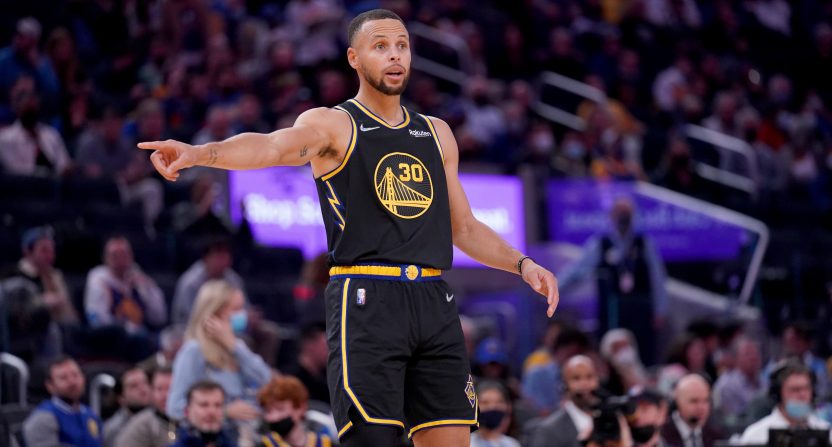 Star point guard Stephen Curry has not played for the Golden State Warriors since spraining a ligament in his left foot against the Boston Celtics on March 16th.

It has been over two weeks since the injury, and we now have a more clear timetable for a potential return for the two-time MVP.

NBA insider Shams Charania has reported on Friday that Curry will miss the rest of the regular season for the Warriors despite progressing well in his recovery from the injury.

Warriors say Stephen Curry is progressing well in recovery of sprained ligament in left foot and will miss remaining five games of regular season as he will be re-evaluated on April 11.

The Warriors seem to be progressing with caution as it comes to Curry going forward.

Head coach Steve Kerr did not seem too concerned about the availability of Curry heading into the playoffs, having this to say to NBA reporter Kendra Andrews about his star point guard.

“We were hoping that maybe he could play one or two games at the end of the regular season, but that was kind of a long shot. This is how it’s turned out… I’m not too worried about him.”

The Warriors are currently the fourth seed in the Western Conference and are firmly sitting inside the NBA playoffs with no real threat of slipping to a play-in spot.

This is likely why they are deciding to sit out Curry to be as close to 100% as possible before their first-round matchup.

Kerr added that he likely plans to sit other players down the stretch of the season, including Andre Iguodala and Klay Thompson.

While it is concerning that Curry will have been out of action for over a month once the NBA playoffs start, he will likely be able to suit up which is clearly the top priority for the Warriors heading into postseason play.