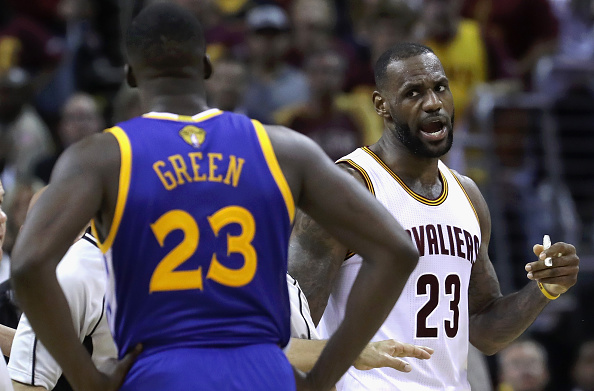 Game 4 of the NBA Finals spent 45  minutes sucking all of the suspense and intrigue out of the series, but the last three wound up making a huge difference.

Draymond Green will not play Game 5 for the Golden State Warriors, while serving a one-game suspension. If you’re reading this column, you know why, so let’s save each other time on that part.

Make no mistake about this, though: Draymond Green is 100 percent responsible for putting his team in this situation. It’s not Kiki Vandeweghe’s fault, nor LeBron James’. Green knew the score, and he lost his cool. Respect, disrespect, it doesn’t matter.

Let’s recall Game 3 in the Houston series when, frustrated that the Warriors were losing and that he hadn’t played well, Green wrapped up Michael Beasley and threw him down with one second to play. Nothing was called at the time, but the league reviewed the play and assessed a Flagrant Foul 1. Without that point on his record, Green would be playing Game 5 tonight.

I believe the Warriors can still win Game 5. It will take a consummate effort from 12 players and it will look frantic, but it can be done. And even if Golden State loses and wins Game 6 in Cleveland, it will be another big notch in their belt. Not only will they have beaten the Cavaliers with all of their guys, but they’ll have done so despite losing one of their best players for a critical game. I don’t know if anyone’s mind is likely to change regarding the Warriors’ historical ranking, but I would think this might move a few people to think better of this squad.

The 2016 NBA Finals has had everything, it seems, except a bunch of competitive games. The series started out as an intriguing matchup. Rematches in championship series always hold a certain level of interest, especially when most of the key players return for both teams. In this case, with Cleveland protesting for the past 11.5 months that last year’s result was invalid due to its injury situation, there was even more at stake. Throw in the Warriors’ 73-win season and their desire to be considered among the NBA’s best teams ever, and you have quite a fire going.

Well, that lasted about a game and a half. The Warriors were far superior to Cleveland during the first two games in Oakland, and the mere idea that Cleveland could win four out of five games against a team that had defeated them seven straight times was laughable. Series over.

But wait a minute — the Warriors did their Game 3 disappearing act thing and Cleveland not only won, but put a 30-point pasting on the champs that had everybody questioning everything they’d seen up to that point. Game on!

Then we were reminded that the Warriors are really freaking good. They won Game 4 in Cleveland, which the Cavaliers absolutely had to have. Golden State hung around all first half, finally took the lead late in the third, and steamrolled Cleveland in the fourth quarter in front of their devastated fans. The Cavs lost at home for the first time in the playoffs. Even more important, they lost the ability to protect their home floor and force a winner-take-all Game 7, the one-shot deal LeBron James would have signed up for when this series began.

Well, maybe not. With three minutes left in Game 4 and his team’s fortunes (not to mention his own legacy) looking really bleak, LeBron either:

B) Accidentally knocked Green down and then accidentally stepped over him as Green was trying to get up, accidentally dragging his private parts over Green’s head, whereupon Green objected and provided the response that ultimately led to the suspension. You decide.

Except for one thing: The Warriors’ toughest opponent this year hasn’t been the Cavaliers, or the Portland Trail Blazers, or even the Oklahoma City Thunder. It has been a lack of focus which results from being unchallenged by opponents.

They beat Houston without Steph Curry. They beat the Blazers in five tough games, but Curry missed three of those games, including the one the Warriors lost. Oklahoma City took them to seven games, but the Warriors knew they cost themselves Game 1 by going to sleep at halftime, and Games 3 and 4 in OKC were a couple of perfect examples of “non-focus” games.

From Game 5 of that series through Game 2 of the Finals, the Warriors have been locked in and have won every way you can win. They won with 3-point shooting. They won with points in the paint. They won with defense. They won with their depth. Just when it seemed Golden State couldn’t lose, they threw out a Game 3 clunker just to make things interesting… for 48 hours. Then they put James and Kyrie Irving in a vise in the  second half of Game 4, and those two stars helped out by taking all but five of Cleveland’s shots in the half.

Tyronn Lue, not seeming to realize that Game 4 was the one game of the series played on only one day of rest (every other game involved at least two), pushed LeBron and Irving through extended minutes, and their lack of fresh legs showed in a fourth quarter marked by stagnant, chuck-and-pray offense.

It’s ironic, actually, that the Cavaliers’ best chance to win Game 5 — facing an overconfident, unfocused opponent who thinks the night in Oracle Arena is supposed to be a coronation — might have vanished into thin air when Green’s suspension was announced.

The Warriors will be fully engaged on Monday night, and so will their fans. Without Green, that may still not be enough. And in that case, the experience of being 3-0 in Game 6s over the last two seasons, including the clincher last year at the Q, will come in handy.

There’s a lot of speculation about what the Warriors will do on a strategic level to compensate for the loss of Green. Here’s the truth: Nobody knows. Steve Kerr has a few ideas, but until he gets them on the court against live competition, he has no idea what will work.

One of the running themes of the Kerr Era with Golden State is the Dubs’ ability to figure out what they need to do to beat you. It may be simply continuing to play their style and let time work its magic, or it could be a radical change of lineup or assignment. I think that particular skill, and the fact that this team will be sky-high for this game, will be the difference.

As for James, with some time to think about it, I have to give him credit for what he did. He had the presence of mind, even with things going sideways, to entice Green into a response that would get him suspended for Game 5. It’s the only thing he could think of to save the season. He might just have done that, although it seems improbable that his team can pull this off, even with Green missing Game 5.

It’s a start, though, and the Cavaliers’ odds of success are dramatically better than they were Sunday morning.

The series is on! It’s up to the Warriors to turn off the lights Monday night.