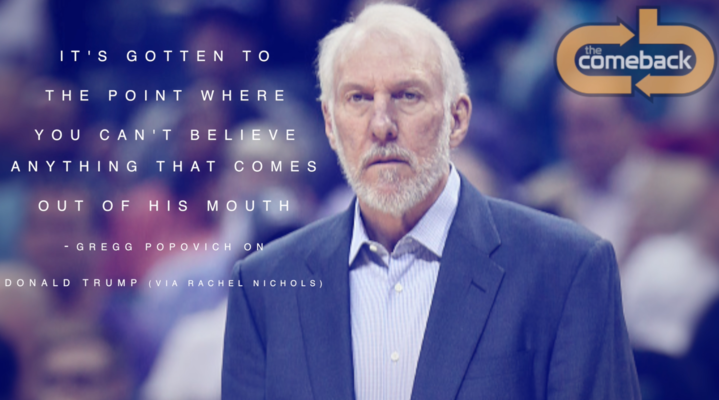 In the era of “stick to sports” time and time again, we see that some athletes and coaches do anything but that. Gregg Popovich has been one of the most honest and open people in the sports world over the past decade or so.

If you ask the right question, you can get some eloquent and well thought out answers from the San Antonio Spurs head coach. Naturally, as many have Donald Trump on the brain, Popovich talked about the newly inaugurated president. The way he spoke was frank and pointed. He knew what he wanted to say and the points he wanted to get across.

Seeing the transcript of his comments in front of you, it reads like a speech at times. This isn’t to criticize the legendary coach, it is amazing how well he was able to describe his feelings during an obviously tumultuous time for the man.

Spurs' Gregg Popovich on Donald Trump: "you really can’t believe anything that comes out of his mouth."
Oh…and there was more. A lot more: pic.twitter.com/UIVL0FYtf7

As tensions continue to get higher and higher, it makes sense that people are speaking out against someone they don’t agree with. It has been practiced in this country, on both political sides, for some time. What is really beginning to turn heads is the fact that more and more people are getting microphones placed in front of them and they are using their platform to espouse their beliefs.

It leads many to scoff at what these larger than life personalities have to say but it’s important to many consumers to see where some coaches and athletes stand on issues that affect the public. The world is ever evolving and despite what other people say, the “stick to sports” mantra isn’t going to stick anytime soon.

Popovich has gone from a basketball coach to a wise, sage person in a short amount of time. It might be the case that he has seen everything in the NBA and wants his other thoughts and opinions to be known; that he isn’t some one note person. As long as he keeps speaking his mind in a non-threatening and respectful manner, the sporting world will continue to listen.