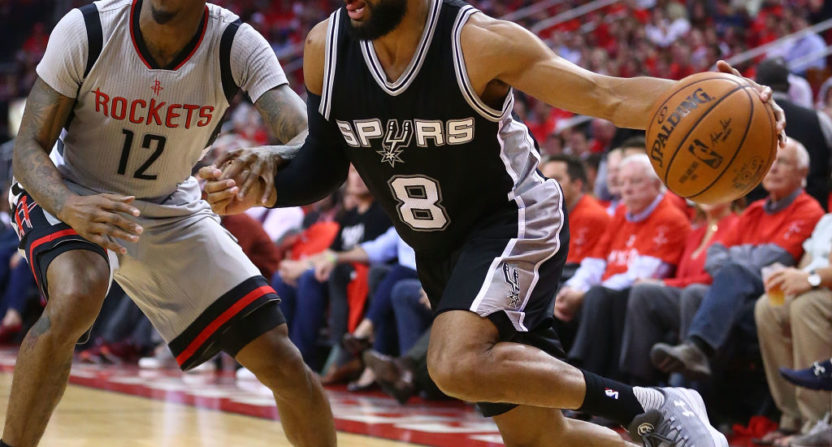 The Golden State Warriors’ comeback from a 25-point deficit to beat the San Antonio Spurs (following the loss of Spurs’ star Kawhi Leonard) spawned plenty of talking points, but one that maybe didn’t get enough attention in all the commotion over Leonard’s injury and if the play that caused it from the Warriors’ Zaza Pachulia was intentional was the play of some lesser-known San Antonio players. With the absences of the likes of Tony Parker (who suffered a season-ending ruptured tendon in his left quadriceps last round) and Leonard (who left in the third quarter Sunday and didn’t return) out, the Spurs had to look elsewhere for production.

San Antonio got some solid play from known names like LaMarcus Aldridge (28 points, albeit with just a 45.8 shooting percentage and several missed shots down the stretch) and Manu Ginobili (17 points in 25 minutes, including a thunderous dunk). However, it was also lesser-heralded players like 6’0”, 185-pound point guard Patty Mills (five points, three assists and two steals, with some big plays down the stretch) that stepped up. That’s maybe not surprising, though, as Spurs’ coach Gregg Popovich had some solid non-praise praise for Mills before the game:

Pop: "I don't want to talk too much about Patty Mills, because the more I say good the more we're gonna have to pay him (in free agency)."

That’s a great Popovich response, and even beyond the laugh line, it has some merit. Losing players in free agency is always a worry, and keeping Mills could be very important for the Spurs’ future. The 28-year-old Australian has mostly been a role player in eight NBA seasons with Portland and San Antonio so far (he joined the Spurs in 2011-12), averaging just 17.0 minutes and 7.9 points across 441 regular-season career games, but he had his best season yet in 2016-17, posting highs in minutes (21.9), points (9.5) and assists (3.5) per game. With the 34-year-old Parker battling age and injuries, Mills has had to play a bigger role, and he’s generally done well doing so; Chris Crouse of HoopsRumors.com wrote Sunday after this quote that the team’s already seen a transition from Parker to Mills in terms of effectiveness:

The 2016/17 campaign brought a changing of the guard on the Spurs. Tony Parker may have started 63 games for the club, but Patty Mills earned the distinction of best point guard on the team this season with his accurate 3-point stroke and his ability to create offense for his teammates.

How long Mills reigns with that unofficial title depends on the front office. He’ll be an unrestricted free agent at the end of the season and he’ll have no shortage of suitors once his camp begins to take meetings.

Mills had four impressive games in the Houston series following Parker’s Game Two injury, posting 15, 10, 20 and 14 points respectively, and he had some good moments in this one too. His shooting wasn’t as strong as it normally was, and he went an unusual one for eight from the field, but some of that was about Golden State’s defensive shifts in the absence of Leonard, and he found other ways to contribute. And if he gets back on the score sheet in a bigger way in Game Two and beyond, Popovich might have to talk about him more, regardless of the potential consequences for the Spurs’ cap this summer.