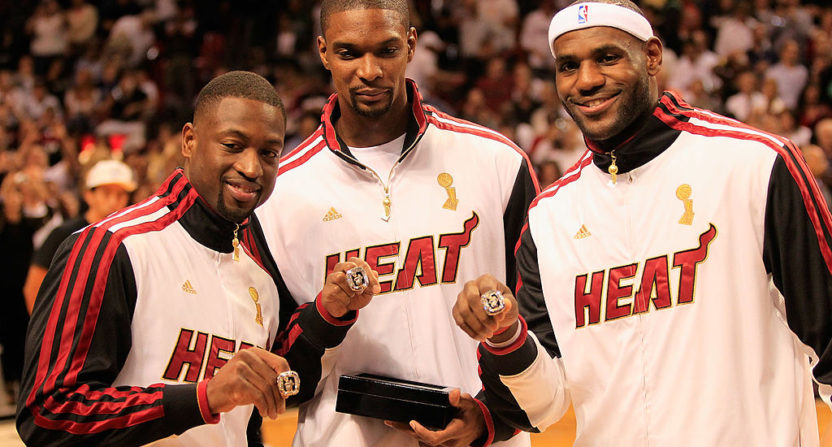 In retrospect, it all seems so incredibly silly. Instead of appreciating the otherworldly talent that is LeBron James, we spent far too much time criticizing him. There were think-pieces about how LeBron was more like Scottie Pippen than Michael Jordan. Skip Bayless built an entire career on ridiculing James for not having the mythical “the clutch gene.”

Most reasonable people realize how ridiculous these opinions were— now. There was a time when some doubted James. Just like some doubted Jordan. Everything changes once you finally win it all. The 2011-12 Miami Heat represented a championship breakthrough for LeBron and his superteam.

The Heat vanquished the Oklahoma City Thunder in five games to clinch James’ first-ever title. So much was riding on this series. Especially after Miami’s shocking NBA Finals loss to the Dirk Nowitzki-led Dallas Mavericks the previous season. Miami was one of the most hated teams in league history, all because James and fellow free-agent Chris Bosh dared to join Dwyane Wade in the summer of 2010 to form the Big Three.

The preseason under/over win total for the 2010-11 Miami team was an absurd 64.5. We seriously wondered if that squad could win 73 games in the Big Three’s first season together. Such an achievement would have broken the record of the 19965-96 Chicago Bulls, who went 72-10. LeBron and company added to the pressure with his infamous “not one, not two, not three, not four, not five, not six, not seven” prediction on championships.

So much talent. So unfair. So many rooting against this great experiment. We howled in derisive laughter when the Heat started 9-8, especially when LeBron bumped coach Erik Spoelstra. Things got so bad that James reportedly wanted Pat Riley to leave the front office and replace Spoelstra.

The Heat regrouped to reach the Finals, but they suffered an embarrassing meltdown against Dallas highlighted by LeBron being accused of mentally checking out during the series. The lasting image from that series was Bosh collapsing and crying at the end.

The 2011-12 season was all about redemption. Miami needed to prove that the Big Three could work together for a common goal. James, after years of carrying lesser players in Cleveland, needed to prove he could deliver a championship. A lot was at stake. If this blueprint failed for a second straight year, Riley would have to consider major changes. And possibly admit that this superteam was a failure.

In a lockout-shortened season, that Heat team finished 46-20, a lower winning percentage than the Big Three’s first year together (58-24). However, this Miami team was probably better equipped to win in the playoffs with an improved young guard in Mario Chalmers and a deeper bench.

In the playoffs, Miami won its first-round series easily over New York. But there was a moment of crisis in the second round when they found themselves down 2-1 to the Indiana Pacers. Wade famously spent his off-day at Indiana University to visit then-IU coach Tom Crean, who was Wade’s college coach at Marquette. Whatever Crean said worked, because the Heat won three straight, with Wade scoring 41 points in the series clincher.

The biggest test was yet to come. Miami’s battle versus the Boston Celtics in the Eastern Conference Finals was epic. It added to the legend of LeBron James because Miami was on the brink of elimination, down 3-2 with the series going back to Boston. James responded with arguably the greatest game of his career: 45 points, 15 rebounds, and five assists in a 98-79 rout. In Game 7 in Miami, the Heat rallied to win 101-88 and return to the NBA Finals.

The young Oklahoma City Thunder were the betting favorite. The Thunder finished the regular season with a better record (47-19) and lost only three games in the playoffs. The team featured three future MVPs: Kevin Durant, Russell Westbrook, and James Harden. It wasn’t a surprise that Oklahoma City came back from down 13 to win the first game 105-94. After that, Miami won the next four games; three were decided by a total of 16 points.

“It means everything,” said James, the Finals MVP.  “I made a difficult decision to leave Cleveland but I understood what my future was about … I knew we had a bright future (in Miami). This is a dream come true for me. This is definitely when it pays off.”

LeBron has added to his legacy with three more titles, winning one more for Miami, one with the Cleveland Cavaliers, and another with the Los Angeles Lakers. But perhaps no championship is more satisfying than the first.