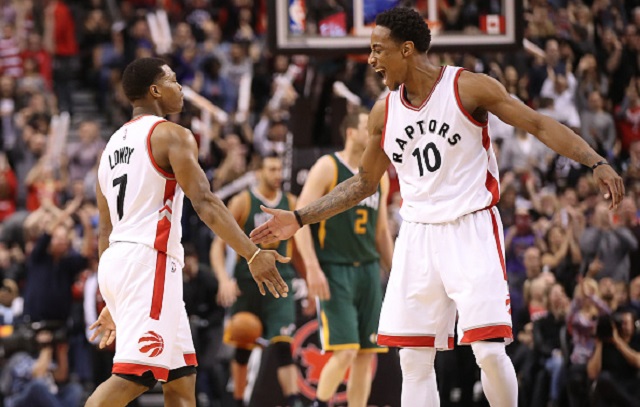 Have we seen the Toronto Raptors, as currently constituted, already reach their peak?

Despite losing in Philadelphia on Wednesday 94-89 in the second night of a back-to-back, Toronto is off to its best start through 42 games (28-14) in franchise history. The Raptors are among the Eastern Conference’s elite teams right now, but the huge question surrounding this team is whether it can compete with LeBron James and the Cleveland Cavaliers for a spot in the NBA Finals.

“Right now, they are. They’re above us,” Raptors head coach Dwane Casey said about Cleveland’s position in the East. “But again, we’re not in a position where we can just look at the Cavs. Believe me.”

The night before their defeat in Philadelphia, Casey elected to rest All-Star point guard Kyle Lowry in a 119-109 victory in Brooklyn. After the game, Lowry spoke to The Comeback about seeing Cleveland as the Raptors’ ultimate obstacle.

Lowry and his teammates still know there’s plenty of room for growth, especially on the defensive end. Toronto is currently 19th in defensive rating, allowing 108.7 points per 100 possessions, and are 20th in rebounds per game and 19th in rebound differential.

“Defense is always going to be the one key factor that’s going to help any team go far,” forward Terrence Ross told The Comeback.

When asked about what Toronto is doing to fix its defensive mediocrity, Casey equated it to constantly plugging holes in a leaky ship.

“We put our finger in one hole and another opens up,” Casey told The Comeback. He said that they’re focusing on multiple areas, including rebounding — “we’ve not been a good rebounding team” — to defending the pick and roll and transition defense.

“We have a routine that we work on at shootaround every day,” Casey said. “So we try to be consistent in our approach, and with that, we hope to improve on it as the season goes on.”

The reason why Toronto is in such a good position right now is its offense, which has been spectacularly efficient all season. Only the Warriors have a better offensive rating than the Raptors, who are third in scoring at 110.3 points per game.

A lot of that has to do with the all-world backcourt of Lowry and DeMar DeRozan. Lowry is shooting an absurd 44.2 percent from three, third in the NBA, on 7.3 attempts per game. DeRozan is averaging 28.2 points per game, nearly five points better than his career high.

“He’s developing a lot of his nuances to his game where he’s more efficient,” Casey said of DeRozan.

DeMarre Carroll is one of only five Raptors averaging double-figure points per game, at 10.1 points on 37 percent shooting from three, and thinks that health is currently holding the team back.

“Being healthy is the biggest key,” Carroll told The Comeback, “and trying to gel at the right time.”

Toronto’s frontcourt has endured numerous injuries, including to Jared Sullinger, who’s been limited to just one game this season with a fractured foot; Patrick Patterson, who’s now missed several games with a knee injury; and Lucas Nogueira, who was placed in the concussion protocol on Tuesday.

It’s necessitated the Raptors to play a slew of young players, most notably 22-year-old Cameroonian rookie Pascal Siakam, who’s already started 35 games this season. Carroll said that younger players stepping into these roles during the regular season will help them out in late April, May and possibly June.

Despite many already anticipating a conference finals re-match between Cleveland and Toronto, the Raptors had a bumpy road last postseason. After finishing second in the East during the regular season, confidence was still low in Toronto after Washington swept the Raptors in the first round the year before.

Being humiliated by Paul Pierce — still a hated figure throughout Ontario, probably — and the Wizards “showed us the importance of how you’ve got to be together defensively,” Casey said. “Just the evolution of the entire program has been one step after another.”

That evolution nearly didn’t come, after Indiana and Miami took Toronto to seven games in each of the first two playoff rounds before falling to the Cavs in six games in the conference finals.

“We always want to advance,” Casey said, regarding the team’s postseason expectations this year. “I’m not going to put a level of where we’ve gotta get to, or anything like that. Our thing is to continue to get better.”

“We just want to be the best in the East,” Ross said. “Right now, Cleveland is number one, so we’re just fighting to get that number one spot.”

So how good can this team get? Will Toronto try to trade for a player who can be a difference maker in its rotation? Paul Millsap was being rumored as the Raptors’ most logical target given their relative weakness at power forward, but Atlanta has taken him off the trading block and the Hawks have won eight of their last 10 games.

Have we already seen peak Raptors? What’s Toronto’s ceiling? Can the team elevate itself enough to beat the Cavaliers in a seven-game series?

Casey and his team are hoping that getting better every day will ultimately be enough to prevent LeBron from reaching his seventh consecutive NBA Finals. Now, it’s up to his players to go out and prove that we haven’t already seen the best of these Toronto Raptors.