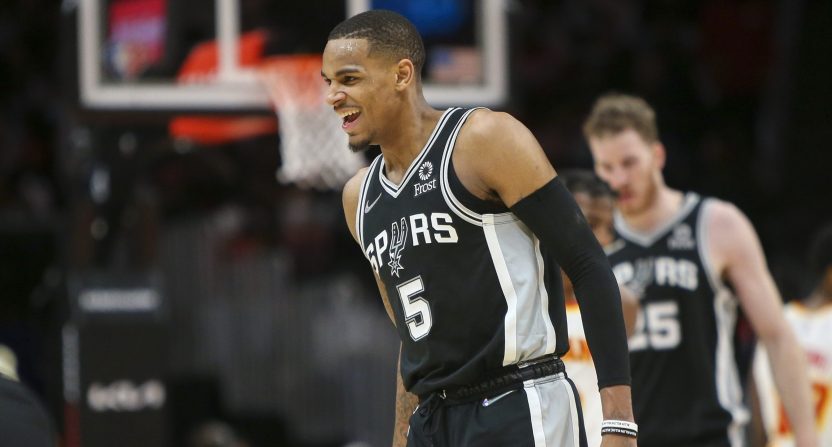 The Atlanta Hawks are trading Danilo Gallinari and multiple first-round picks to the San Antonio Spurs for All-Star guard Dejounte Murray, according to Adrian Wojnarowski.

Woj would clarify that the Hawks are sending a 2023 first-rounder via Charlotte plus their own 2025 and 2027 first-round picks to San Antonio as part of the deal. The Spurs will also get a pick swap in 2026 as part of the package.

The Hawks are sending a 2023 first-round pick via Charlotte, and their own 2025 and 2027 first-round picks to the Spurs in the deal, sources tell ESPN. Spurs will also get a pick swap in 2026.

Zach Lowe added that the 2025 and 2027 picks are unprotected, which means the Spurs get them no matter what happens from here on out.

The 2025 and 2027 first-rounders are unprotected ATL first-round picks, per league source. https://t.co/6M1PAaCfQ8

The trade will give the Hawks one of the most intimidating backcourts in the Eastern Conference as Murray joins All-NBA guard Trae Young. And it certainly feels like this trade was about Atlanta going all-in to compete right now.

Initial reports surrounding the trade included John Collins heading to San Antonio, but it appears that Atlanta was able to swing the deal with Gallinari instead.

Murray averaged 21.3 points and 9.3 assists last season and was one of the lone bright spots on a bad San Antonio team. Meanwhile, Gallinari averaged 11.7 points and 4.7 rebounds for Atlanta last year.

Naturally, the news of this big trade and what it means for the immediate future for both NBA teams was a big topic on social media afterward.

Even if the Hawks are good in a few years, unprotected picks this far out into the future are gold mines from an asset perspective. Spurs set themselves up well for the future. https://t.co/QqaPsMsTbd

South East division just got a lot better, Hawks putting their chips in the middle for a win now move. https://t.co/E9UbcaZXjt

After weeks of rumors and reports, the San Antonio Spurs have finally pushed the reset button on a massive trade.

This blockbuster lets Dejounte Murray compete for a title while giving PATFO a trade chip and tons of draft capital. https://t.co/dC3AviIHsM

For the Spurs, it looks like they are going into tank city now. I don't like it, I would have liked to see them chase after Ayton and see what the team could have done together but now they are jut loading up draft assets. https://t.co/FytZNwg5po

Great trade for the Hawks
Gallo is a declining player
And picks don’t matter in the NBA https://t.co/l4g90uYKgF

The Spurs are going all-in on the rebuild now, with some franchise names at the top of next year's draft board. https://t.co/bdJeqer9og

There were also a lot of strong reactions from Knicks fans as they were hoping their moribund franchise could trade for Murray. Alas…

The Knicks, as usual, couldn't be bothered, and will counter by overpaying Brunson tomorrow night https://t.co/bju2b2lOym

You have to be kidding me man 🤦‍♂️ https://t.co/xz9OdC9Hom