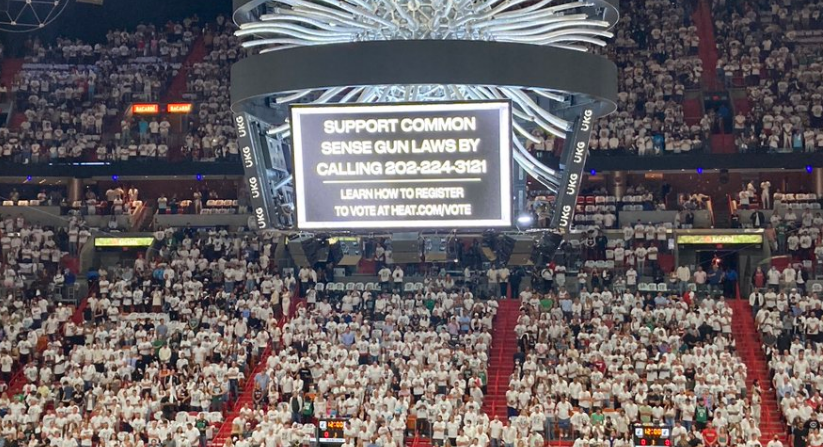 Prior to Game 5 of the Eastern Conference Finals between the Boston Celtics and Miami Heat on Wednesday night, there was a moment of silence to remember the lives lost in the shooting at Robb Elementary School in Uvalde, Texas on Tuesday. But the Heat went a step further.

When the moment of silence was complete, public address announcer Michael Baiamonte also urged fans to contact their senators, “to leave a message demanding their support for common sense gun laws.” The message was met with applause from those in the arena.

A moment of silence. pic.twitter.com/8Ycn1uqN0i

The same message was displayed on the videoboard at Miami’s FTX Arena.

The people in the arena were not the only ones who supported the message. NBA fans on Twitter were left pleasantly surprised by what they saw and heard.

Im extremely proud of the NBA and the Miami Heat for taking a moment of silence before the national anthem to mourn those lost yesterday and encourage people to ask their state senators to pass common sense gun laws.

WHOA! The Miami Heat just did a pregame remembrance of those lost in Uvalde then asked for everyone to contact their Senators to demand common sense gun control laws. I’m a Celtics fan, but thank you @MiamiHEAT and @NBA!

The Heat arena announcer just said the number for their senators offices during pregame after a moment of science, telling people to blast them for gun control measures.

The basketball game will happen, but the Heat have a win tonight already

Hey @MarcoRubio and @RickScott Did you watch the pregame announcement at the Miami Heat game? If not, you may want to find out what they had to say about contacting Senators to demand common sense gun laws.

Miami Heat announcer after pre-game moment of silence gave out the number to Florida State Senators to demand common sense gun laws and said you can also seek change at the ballot box. Bravo Miami Heat!

Kudos to the Miami Heat for their pregame nudge to call your Senators yo pass common sense gun controls and to register to vote! @NBA @ESPNNBA

Wow. The PA announcer at the Heat-Celtics game, after the obligatory moment of silence for the shooting victims, urged people to call Congress and demand common sense gun legislation. Crowd roared in approval. Thanks @NBA.

Big W to the Miami Heat for the pregame

Wow, impressive. Before Celtics-Heat game, PA announcer encouraged fans to contact their senators and push for common sense gun laws — and also to get out and vote. Not just the usual moment of silence/thoughts/prayers. And this game is in Florida.

This is more or less in line with what Golden State Warriors coach Steve Kerr said in the more immediate aftermath of the tragedy, in his press conference prior to Game 4 of the Western Conference Finals on Tuesday. Miami coach Erik Spoelstra had similar sentiments in his pregame press conference on Wednesday.

Erik Spoelstra speaks on the tragic shooting in Uvalde, TX: Feels like just yesterday we were going up to Parkland. We don't have the answers but we want to be heard by the people that can actually make change happen. pic.twitter.com/dDcHvrj3rz

If similar tragic events do occur in the future, expect to see more of this from athletes, coaches, teams and leagues. If nothing else, the shooting in Uvalde has shown us that they aren’t willing to be content with the normal moment of silence.