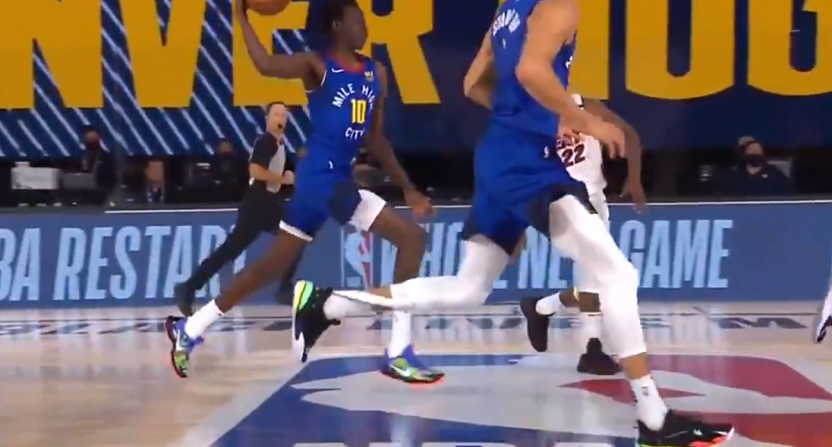 The NBA’s return has been a fairly astounding success, all things considered. (It helps when MLB has lowered the bar so drastically, but still.)

We’ve had a lot of fun games already, and in addition to that, we’ve gotten to see some players who maybe wouldn’t have been on the court had the season played out as originally scheduled. Players like Bol Bol, who spent most of the year in the G League and recovering from an injury that saw him plummet into the second round of the NBA Draft last summer. Now, the 7’2″ son of Manute Bol is getting regular run for the Nuggets as they look to lock in one of the top seeds in the West.

Bol got 12 minutes today in a loss to the Heat, and while his line finished a not overly impressive 5 points, 4 rebounds, and 1 assist, that assist was a fantastic one.

And here's that Bol Bol fast break bounce pass with the replay pic.twitter.com/gSx5lpSFkr

Bol has a lot of work to do on his game, obviously, but being that size with that level of skill and awareness is a very rare combination. Will he sometimes still look like this? Sure.

(And for that matter so will the rest of the league at times as they get back into game shape.)

But if Bol stays healthy, he has the potential to be a special talent. And at the very least, he’s going to be a ton of fun to watch.