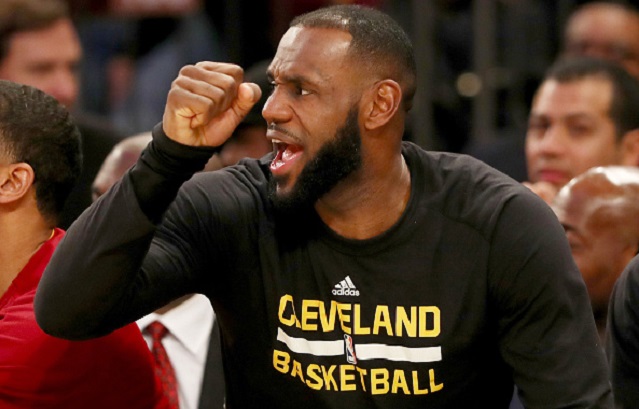 If you’ve noticed LeBron James looking at his iPad on the bench during Cleveland Cavaliers games recently, he’s not checking out Facebook or Face Time. (We also assume he’s not getting text messages from Maverick Carter about the latest Hollywood project their production company has put together.) He’s reviewing video to improve his play.

The NBA has allowed teams to use iPads on the bench since the 2012-13 season, but beginning this season, NBA clubs can use those devices to review real-time video from the bench. James has taken advantage of the rule change to study video from the current game while he’s getting a rest on the bench.

“Just seeing how defenses are playing me, playing us,” James told Cleveland.com about using his iPad. “Just trying to stay above the curve and see how I can help.”

During the occasional three-to-four minute intervals when LeBron comes out of a game, Cavs’ assistants make sure there is an iPad ready for James to use. The iPad will be loaded up with video of LeBron’s play during the game. As of now, LeBron is the only Cleveland player to take advantage of this rule. (Hey Siri, how do I get my teammates to check this stuff out too?) Live streaming isn’t allowed on the devices, but James says he’s paying attention to the game in front of him anyway.

“I like to watch the game live, too,” James added. “So I’m always watching and looking up so I know what’s going on. It’s beneficial.

“You should, shoot, it’s 2017. We should be trying to find ways to continue to build our game. Bring technology into it. If guys want the ability to watch film during the game while they’re out, they should do it.”

While LeBron seems to be a big fan of the new way to improve his game, Cavs coach Tyronn Lue isn’t because of the time constraint.

“I’ve got to come to the huddle with my coaches. We talk, by the time I get to the huddle I’ve got to draw the play up, the games about to start. So, I don’t have a lot of time to do that,” Lue said.

The NBA isn’t the only sport that’s allowing the use of tablets during games, either. (Though some teams have been quicker to embrace the technology than others.) For a while now, the NFL has been using Microsoft Surfaces on the sideline. Although some members of the NFL aren’t fans of them, such as Bill Belichick.

The NFL is the only one of the big four sports that doesn’t use Apple products. MLB introduced its new partnership with Apple before the 2016 season, which allows teams to use iPads in the dugout and in the bullpen.

Reports also circulated over the weekend that the NHL is close to a deal with Apple.

“The NHL Apple deal is more a major partnership than a sponsorship,” said a source familiar with the NHL’s plans. “Right now, some teams have iPads or other tablets and some don’t. Some have good Internet connections, some don’t. This deal is about having a consistent platform that every team can use in every rink,” per TSN.