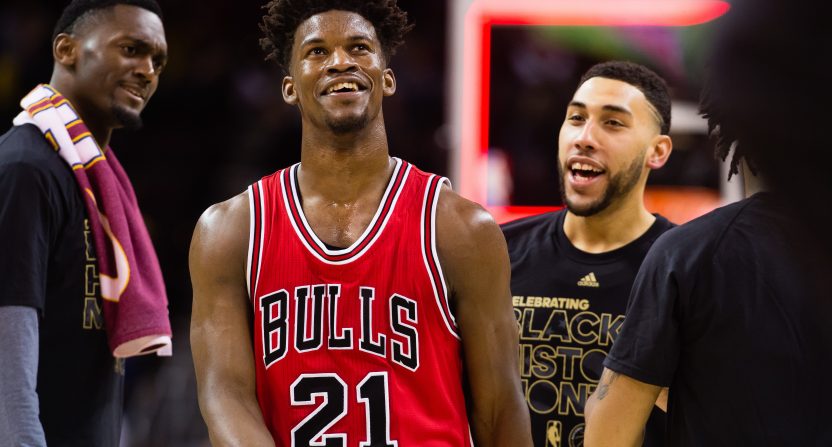 Jimmy Butler has been a very good-to-great NBA player for years now, but with two years left on his deal and the Bulls floundering, there have been trade rumors surrounding Butler dating back to the trade deadline.

Most recently, the Cavs were reportedly kicking the tires on Butler (and Paul George) before Dan Gilbert relieved GM David Griffin of his duties. Now, the Bulls have found a taker for Butler, reuniting Jimmy with former coach Tom Thibodeau.

The Wolves are close to acquiring Jimmy Butler from Chicago, according to league sources

Sources say Minnesota's offer to Chicago for Butler was EXPECTED to include the No. 7 pick, Zach LaVine and Kris Dunn …

The Bulls have agreed in principle to deal Jimmy Butler to the Timberwolves, per source.

Chicago is finalizing a deal to send Jimmy Butler to Minnesota for Zach LaVine, Kris Dunn and No. 7 pick, league source says.

Our @WindhorstESPN reports that the Timberwolves are also getting the No. 16 pick in this deal for Jimmy Butler deal …

That’s a big package, but it seemingly works for both teams; the upgrade from #16 to #7 is a big deal, and Dunn and LaVine are both the kind of young-ish, long assets who can come in and try to help out on the wings and at the guard positions. The T-Wolves, meanwhile, get a legitimate star quality player who has had success under Thibs; Butler alongside guys like Karl-Anthony Towns and Andrew Wiggins is a formidable defensive lineup, especially with their head coach’s obvious commitment to defense.