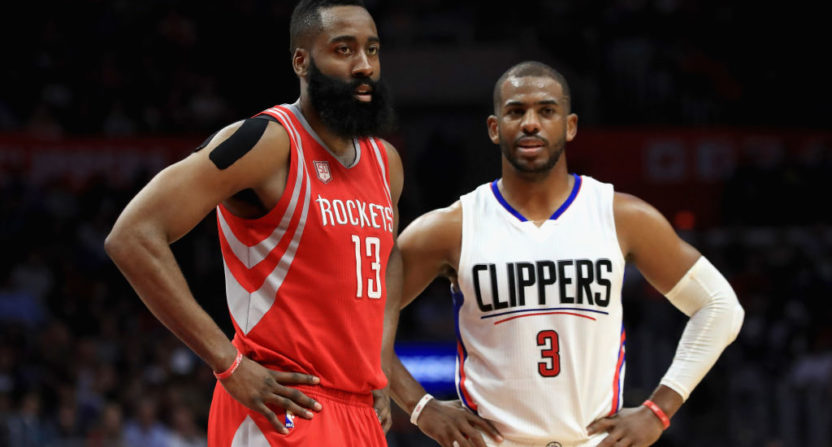 The NBA offseason didn’t even give us a chance to marinade in the endless rumors and innuendo before delivering a league-altering blockbuster deal.

According to Yahoo’s Adrian Wojnarowski, the Houston Rockets have acquired nine-time All-Star Chris Paul from the Los Angeles Clippers. Paul was set to become a free agent on Saturday and reportedly told the Clippers he had decided on signing with Houston but that he would opt in to the final year of his contract so Los Angeles could trade him. The Clips get Patrick Beverly, Sam Dekker, Lou Williams and a first-round pick in the deal, per Woj and others.

Chris Paul and James Harden were determined to play together, and found a way with Rockets-Clippers trade agreed upon today.

Before a report Wednesday morning that the Rockets were pursuing Paul aggressively, the Spurs and Clippers were considered front-runners for the future Hall of Famer’s services.

This trade means Paul will join James Harden in Houston on a team that won 55 games and finished third in the Western Conference last season. A Paul-Harden union certainly won’t make the Rockets title favorites over the Warriors, but it will give them a pair of superstars at a time when that seems to be the baseline for postseason success in the NBA.

The Daryl Morey-era Rockets have been consistently good and sometimes very good but never truly great, and this seems like their chance to get over the hump. Paul might need some time to click with his new teammates, as Harden moves back off the ball and Mike D’Antoni configures his offense around a true point guard, but with CP3 in tow Houston has a chance at some deep playoff runs over the next few years.

Paul’s departure probably marks the end of the Clippers’ run as a consistent top-5 team in the West, though they’ll likely have Blake Griffin around to keep the team respectable. The Paul era in L.A. will be remembered for a bunch of regular-season wins, fewer alley-oops than expected and a succession of playoff disappointments.

But the Clippers’ breakup is the Rockets’ gain. In today’s NBA (and, to some extent, yesterday’s NBA as well) talent tends to accumulate in a few spots, where players flock in search of a title. There are rarely more than five teams at once truly aspiring toward a championship. As of Wednesday morning, Houston appears to be one of those teams.