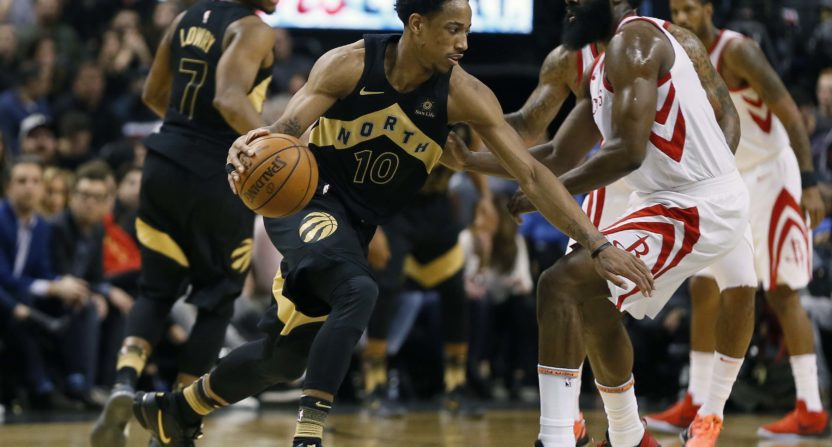 The Houston Rockets had their NBA season-best winning streak end at 17 games with a 108-105 loss to the Toronto Raptors on Friday night at Air Canada Centre.

The Raptors got off to an excellent start, taking a 32-16 lead into the second quarter.

The Rockets, winners of 17 straight, trail the Raptors 32-16 after the 1st quarter.

It's the fewest points scored by Houston and the largest deficit it has faced after the 1st quarter all season.

And it appeared the Raptors were going to pull away when they took a nine-point lead into the final five minutes of the quarter. But the Rockets have James Harden, and the NBA MVP candidate decided to turn things up a notch. Harden — who had 40 points on the night — hit a couple nasty stepback threes to lead the Rockets on a 9-0 and tie the game 102-102.

James Harden with the 3 to tie the game late in the fourth ? pic.twitter.com/X0CBS0yBOu

Well, the Raptors have a star guard themselves in DeMar DeRozan, and he nailed this fadeaway with the shot clock running down to give Toronto the lead back.

And on the final play, the Raptors got some help from Drake to hold off the Rockets.

So, that put an end to the Rockets’ remarkable streak, and maybe will bring more attention to what the Raptors are doing.

Most of us (*raises hand*) have doubted the Raptors as a true title contender and even a true contender to come out of the East in the playoffs, and with their recent history in the playoffs (after good regular seasons), it’s hard not to.

But perhaps it’s time to take the Raptors seriously, especially in an up-for-grabs Eastern Conference. And they’re now 2-0 vs the Rockets, a team they could see in The Finals.

The Raptors will look to extend their winning streak to eight games when they take on the New York Knicks on Sunday afternoon at Madison Square Garden.