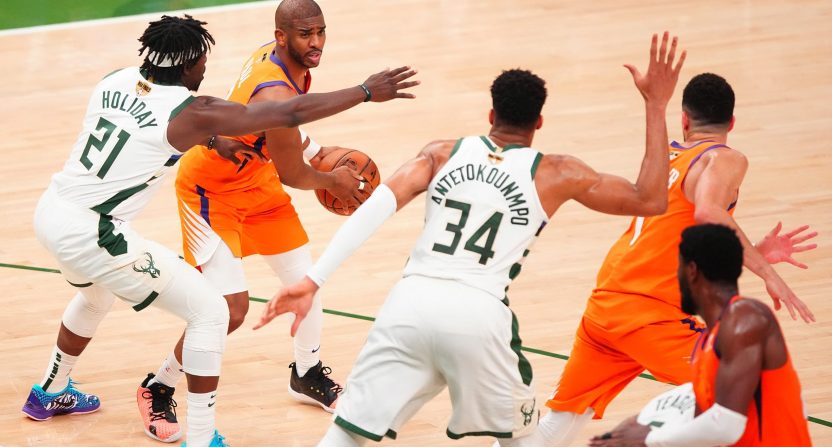 Until Game 4 of the NBA Finals, no one had been able to figure out Chris Paul and his Point God operation on this Phoenix Suns team. Apart from his injury-plagued games against the Lakers in the first round, Paul has controlled games and kept Phoenix’s offense flowing while scoring himself on borderline unguardable mid range jumpers.

The Suns’ clinical success masked a curious problem for the Suns, however: Paul and Devin Booker haven’t been able to produce great games at the same time. Games 3 and 4 of the Finals in Milwaukee put a spotlight on the divergent performances of the two stars. Booker put up a clunker in Game 3, shooting 3-for-14 and scoring just 10 points, then responded with a transcendent 42-point Game 4. But Paul’s Game 4 struggles offset Booker’s effort and the Suns’ 2-0 series lead has evaporated.

Sometimes, as coaches often acknowledge, players have good and bad games and there aren’t necessarily strategic explanations for everything. That feels like part of the explanation for Booker’s up and down output. But Paul has been steady throughout these playoffs even when his shot isn’t falling. He has avoided turnovers and racked up assists, keeping the Suns’ offense humming, particularly in crunch time.

That’s why these last two games, particularly Game 4, feel different. Paul has turned the ball over more (averaging five per game since Game 2) after spending most of the playoffs rarely coughing it up. He also had a hard time getting his own shot. He scored just two points on four shots in the first half on Wednesday, finishing 5-for-13 for 10 points and seven assists.

A big reason for Paul’s struggles in Game 4 was Jrue Holiday, who has put in incredible defensive work in this series. Toggling between Paul and Booker, Holiday has fought over every screen and made things very difficult for the two stars. Holiday’s ability to stonewall Paul one-on-one allows the other Bucks defenders to stay home on shooters, preventing Paul from generating easy looks.

Holiday harasses the ball, poking and proddingt and making you think that he might poke it out, which he very well might at any moment. He is adept at staying on Paul’s shoulder as he makes his way over screens, discouraging jumpers and enveloping his vision, forcing those jump passes that have started to result in turnovers:

The first solution that comes to mind to lessen Holiday’s influence would be to force switches. The Suns tried that a number of times in the second half and they accomplished the switching, usually forcing Bobby Portis or Pat Connaughton to guard Paul. But those possessions mostly didn’t bear fruit, as Paul settled for contested jumpers.

It shouldn’t have been the end of the world for the Suns that Paul wasn’t finding his shot. There have been plenty of times this season and in the playoffs where Paul wasn’t scoring at a high volume, but was still able to orchestrate an efficient offense. That didn’t happen in Game 4.

In addition to Holiday’s outstanding work, much of the credit goes to the Bucks’ help defenders, particularly Giannis Antetokounmpo. Giannis has been absolutely massive as a defender in the past couple of games, disrupting possessions and containing pick-and-rolls.

The Block will deservedly get the attention, and we will get to that in a second. But Giannis’s impact was felt heavily throughout the game. He is a very real deterrent around the hoop and in the mid-range areas that the Suns love to inhabit. Mike Budenholzer has made the conscious choice to deploy him as a help defender rather than in a perimeter shutdown role, and it has paid dividends.

His impact might have been most prominent when the Bucks went to their closing Giannis-at-the-five arrangement. His mobility, length, and defensive IQ make him the perfect antidote to the Suns’ pick-and-roll attack. Just watch this steal late in the fourth quarter:

That’s an action that the Suns have run a lot throughout the playoffs. It has Paul coming off a Deandre Ayton screen with Booker popping to the top of the key for a shot, an attempt at making Booker’s defender (in this case Khris Middleton) decide between helping on Paul or staying with Booker. Giannis makes that choice moot: his ability to cover both Ayton and Booker at once allows Middleton to go all the way to Paul.

When Paul throws a difficult pass back in Booker’s direction, Giannis reaches out and intercepts it, starting the fast break that led to Booker somehow not fouling out.

Not long after, Giannis singlehandedly shut down a Paul drive coming off a screen:

There aren’t many big men in the NBA who are able to play this high in a pick-and-roll situation and still keep pace with a ball-handler driving downhill. Giannis needed no help to deter this layup.

He also needed no help to make the Block, which was instantly one of the best defensive plays in Finals history. I’m sure you’ve seen it already:

Replays of that absurd Giannis block on Ayton pic.twitter.com/LneQ4bwgCG

It’s simply impossible that Giannis was able to leap so high so quickly. The Suns finally found a good offensive look, freeing Booker and Ayton on a well-designed play that put Ayton by himself near the rim. Giannis broke it up, and the Bucks won.

Phoenix will need a lot more from Paul back home in Game 5 to keep from falling down 3-2 in the series. They’ll also need another great shot-making performance from Booker.

The Suns have made adjustments all playoffs, but with Holiday, Antetokounmpo, and the Bucks’ swarming defense, this is the first time that the core of their offense has been legitimately threatened.