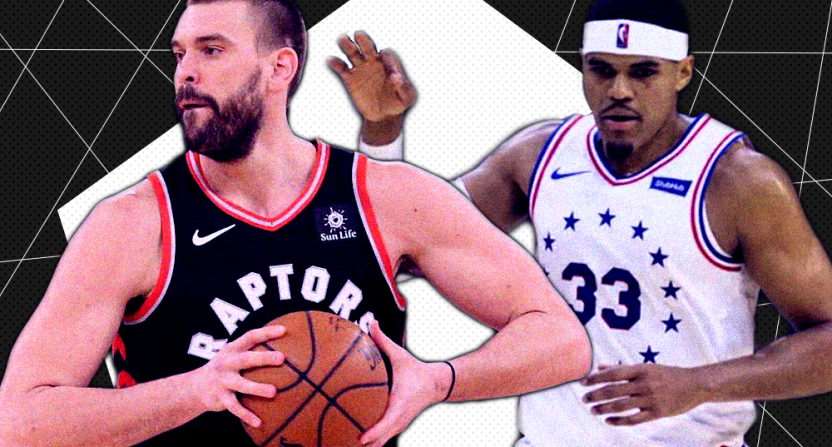 Ahead of the NBA playoffs, multiple contending teams pulled off late-season trades in an effort to bolster their roster, improve their playoff chances, and take the next step towards contention. There were a variety of deals, both big and small, that have made significant impacts on current playoff teams. Here are the notable trade deadline moves that have made impacts on playoff teams and how they have played out so far.

With Joel Embiid, Ben Simmons, and Jimmy Butler already in the fold, the Sixers decided to go for it at the trade deadline, pulling off a huge blockbuster trade with the Clippers to bring in Harris for a package that included serious future assets, with the biggest being two first-round picks and point guard Landry Shamet.

Initially, Harris fit in nicely in the Sixers’ star-powered starting lineup. He averaged 18.2 points and 7.9 rebounds in 27 starts in the regular season. In the postseason, Harris has been frustratingly inconsistent. In Philadelphia’s 1st round match-up against the Brooklyn Nets, Harris proved effective, averaging 17.6 points and 9.0 rebounds per game in the five-game series.

However, against the Raptors in the second round, Harris has struggled badly. In four games, Harris is averaging 13.0 points on 15.5 shots per game. He has failed to score above 16 points in any of those matches while shooting a poor 34.6 percent from the field. The Sixers really need the upcoming free agent to step up offensively and be as effective as was before the Raptors series.

The other players, Mike Scott and Boban Marjanovic, have had nice impacts in small bench roles. Scott played big minutes for the Sixers in the 1st round against Brooklyn, chipping in 15 points in Philadelphia’s 143-123 victory while playing showing some defensive versatility in smaller lineups. Unfortunately, he missed the start of the Raptors series with a heel injury. Meanwhile, Marjanovic feasted on the Nets averaging 10.8 points and 6.2 rebounds as the first big off the bench. Against the Raptors, he has barely seen the floor as the 7’3″ center’s lack of mobility has been badly exposed in pick and roll situations.

In a separate deal, the Sixers added to their bench by bringing in James Ennis from Houston for practically nothing. Surprisingly, Ennis has been a key contributor for Philadelphia, as he’s scored in double digits in three of four games against Toronto while playing solid defense. Trading for Ennis seemed like an inconsequential trade that has turned out quite nicely for the Sixers.

The Raptors bet on Marc Gasol’s veteran experiences when they traded former starting center Jonas Valanciunas along with point guard Delon Wright in a package for the Spanish big man. By acquiring Gasol, Toronto envisioned the big man as adding a new dimension to the starting unit with his plus defense, passing and three-point shooting.

Gasol has been adequate in Toronto. After being one of the featured scoring options in Memphis, his usage has understandably dipped since joining the Raptors. After averaging 9.1 points and 6.6 rebounds per game in 26 games with his new team to end the season, Gasol has been as advertised. In Toronto’s first-round series against Orlando, Gasol’s numbers looked pedestrian at first glance. He averaged 8.4 points 5.6 rebounds per game while shooting 49.7 percent three and 51.1 percent from the field. Against the Sixers, early shooting woes made Gasol largely a non-factor in the first three games. In game four, Gasol was more aggressive and chipped in 16 points, five boards, and 3 assists.

Gasol is a plus offensive player, but his real value is on the defensive end. He has slowed down Joel Embiid in the post and kept him under 20 points in three of four games in the series. Gasol’s value is not always apparent on the stat sheet, but his defense has been invaluable for the Raptors. Gasol has a plus 83 plus/minus in nine postseason games.

Philly has to find some ways to create movement off Embiid's post ups. Toronto totally fine with Gasol guarding him 1v1. Cuts, screens, splits can put pressure on defense. Really good individual defense by Gasol to let everyone else stay home. pic.twitter.com/GnolUYvM3H

The Bucks brought in Nikola Mirotic to serve a floor spacer for Giannis Antetonkounmpo, and that’s more or less what the sharpshooting power forward has provided. Despite being slowed down by a thumb injury, Mirotic appeared in 14 regular season games for Milwaukee, averaging 11.6 points and 5.4 rebounds per game. In the postseason, he has averaged 9.3 points per game on 37 percent shooting from three. While he is not lighting the world on fire with his production, Mirotic is the type of player successful teams need to win. He shoots the ball well, can score off the bench, and create matchup problems for opposing teams.

Rodney Hood’s stock has fallen off a cliff in the last couple years, as he ended up on Cleveland as Utah moved on from him in 2017-18 after deciding he was not a part of their long-term future. Hood shot the ball mostly well for the Cavs, averaging 12.2 points per game on 36.6 percent shooting from deep. So, when the Blazers acquired him at a reduced price, it represented an intriguing low-cost gamble.

After being largely a non-factor in Portland’s first-round series against Oklahoma City, Hood has been tremendous off the bench in the second round. In four games against the Nuggets, Hood is averaging 14.5 points per game on 68.8 three-point shooting, while hitting 61 percent of his shots from the floor. He nailed a huge three-pointer at the end of quadruple overtime to give the Trail Blazers a late lead in Portland’s 140-137 Game 3 victory.

By acquiring Hood, Portland managed to keep their first-round pick and younger players while getting a key bench player at a great price. Hood is a perfect fit off the bench for the Blazers.